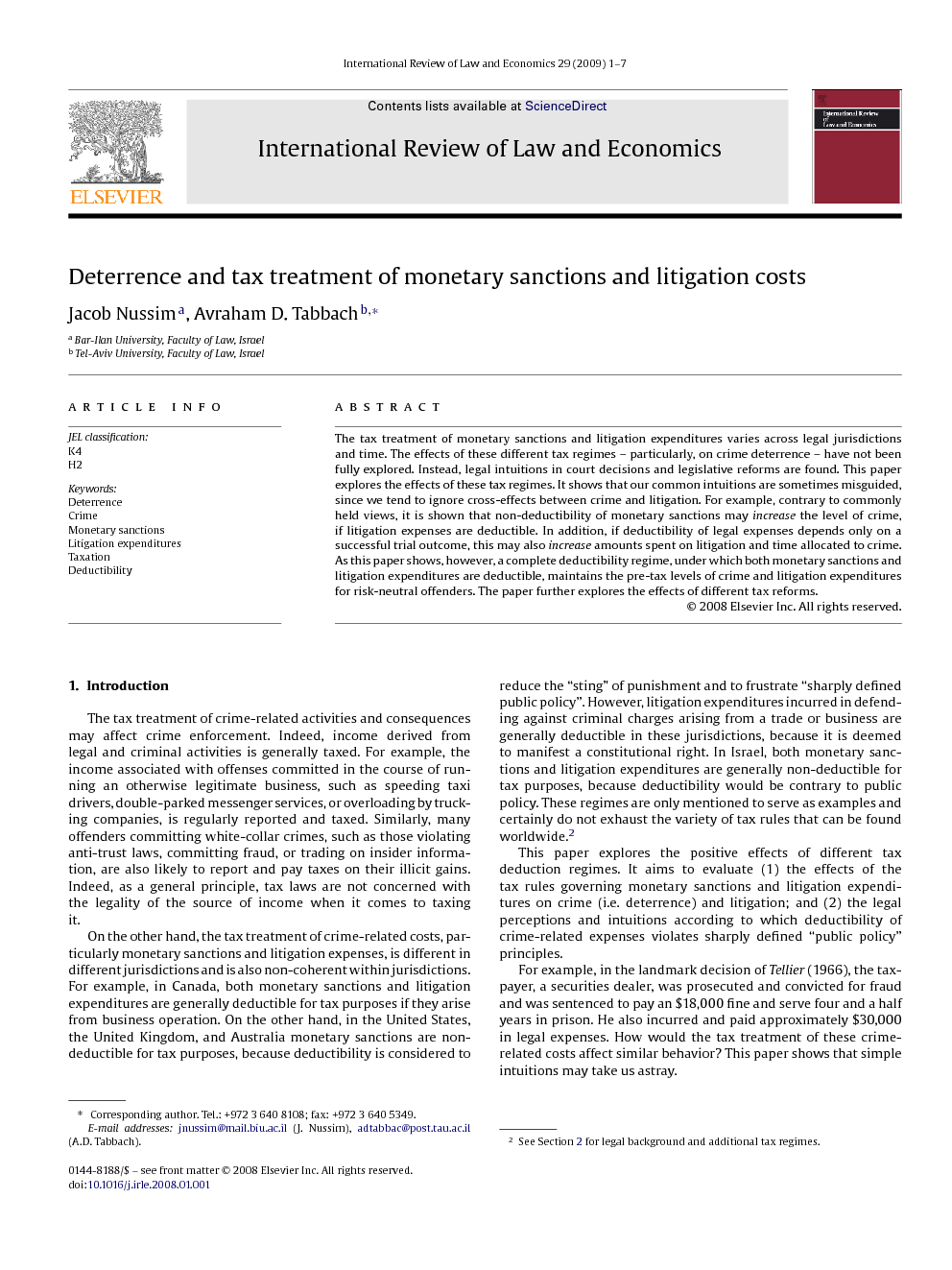 The tax treatment of monetary sanctions and litigation expenditures varies across legal jurisdictions and time. The effects of these different tax regimes – particularly, on crime deterrence – have not been fully explored. Instead, legal intuitions in court decisions and legislative reforms are found. This paper explores the effects of these tax regimes. It shows that our common intuitions are sometimes misguided, since we tend to ignore cross-effects between crime and litigation. For example, contrary to commonly held views, it is shown that non-deductibility of monetary sanctions may increase the level of crime, if litigation expenses are deductible. In addition, if deductibility of legal expenses depends only on a successful trial outcome, this may also increase amounts spent on litigation and time allocated to crime. As this paper shows, however, a complete deductibility regime, under which both monetary sanctions and litigation expenditures are deductible, maintains the pre-tax levels of crime and litigation expenditures for risk-neutral offenders. The paper further explores the effects of different tax reforms.

The tax treatment of crime and litigation expenditures may obviously affect deterrence and, therefore, is important. However, the resulting effects are not straightforward. This paper explores these effects on crime deterrence and litigation effort generated by alternative tax deductibility regimes, given a crime enforcement scheme. It shows that our common intuitions are often misleading. For example, contrary to commonly held views, a partial deductibility regime – such as the US, UK, or Australian tax regime – may dilute, rather than strengthen, crime deterrence. This is true for increasing tax rates or in comparison to a complete deductibility regime. Similarly, a Canadian-like complete deductibility regime does not induce crime or litigation, as commonly believed, but rather maintains their pre-tax levels. This paper provides a positive framework for potential tax reforms, such as the one recently contemplated by the Canadian legislators. The model and analysis suggested in this paper can also assist in evaluating the effect of alternative criminal sanctions such as monetary vs. non-monetary sanctions. The qualitative results of this paper, particularly those associated with a complete deductibility regime, are generally robust to certain refinements of the model, specifically those concerning different assumptions about the probability of apprehension, conviction or punishment.32 However, the results may be sensitive to the risk attitudes of offenders and to the variability of leisure time. For example, if offenders are risk averse, rather than risk neutral, then a complete deductibility regime no longer maintains the pre-tax levels of crime and litigation. This is true for two reasons: first, the direct effect of such a regime on crime is ambiguous due to conflicting risk effects, as shown by Tabbach (2003)33; second, it can easily be shown that the direct effect of such a regime on litigation is also unclear, since taxation may change both the marginal costs and benefits of litigation.34 Similarly, if leisure time can vary, one can expect at least two additional, well-known tax effects to enter the analysis. On the one hand, taxation reduces time allocated to both legal and criminal activities, because it makes leisure relatively cheaper than market activities (substitution effect). On the other hand, to the extent that taxation reduces wealth, it increases time allocated to market activities as long as leisure is a normal good (income effect). These two additional effects work in opposite directions and make the analysis more complex and the results ambiguous.35