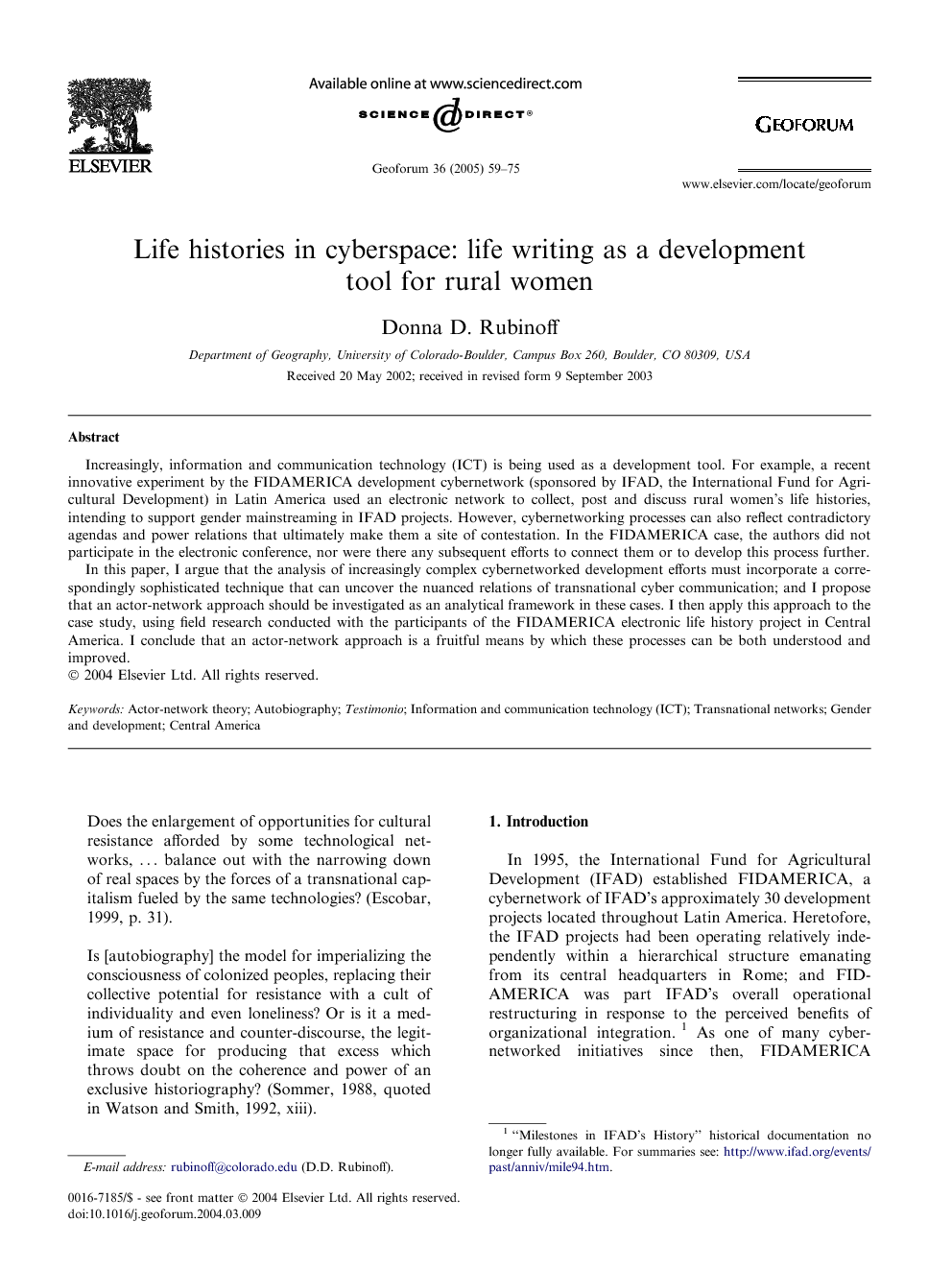 Increasingly, information and communication technology (ICT) is being used as a development tool. For example, a recent innovative experiment by the FIDAMERICA development cybernetwork (sponsored by IFAD, the International Fund for Agricultural Development) in Latin America used an electronic network to collect, post and discuss rural women's life histories, intending to support gender mainstreaming in IFAD projects. However, cybernetworking processes can also reflect contradictory agendas and power relations that ultimately make them a site of contestation. In the FIDAMERICA case, the authors did not participate in the electronic conference, nor were there any subsequent efforts to connect them or to develop this process further. In this paper, I argue that the analysis of increasingly complex cybernetworked development efforts must incorporate a correspondingly sophisticated technique that can uncover the nuanced relations of transnational cyber communication; and I propose that an actor-network approach should be investigated as an analytical framework in these cases. I then apply this approach to the case study, using field research conducted with the participants of the FIDAMERICA electronic life history project in Central America. I conclude that an actor-network approach is a fruitful means by which these processes can be both understood and improved.

Given the potential impact of the FIDAMERICA Concurso life histories by virtue of their construction, personal impact, and content, what is the reality of their impact so far? On the one hand, the collective process has allowed them to be manipulated by the actors who have controlled the Concurso process. Over the last three years, the life histories have been buried within the FIDAMERICA website, and parts of this conference, (including recently, judges comments), have been deleted. As part of my research, I have discussed the possibility of creating a women's cybernetwork for the women involved in the Concurso and other women connected to FIDAMERICA, but I have received mixed responses and support for this idea from IFAD and FIDAMERICA staff. IFAD high-level staff have been very supportive of what one of them has called an “innovation,” 59 but without offering money. Although the director of FIDAMERICA is willing to cooperate by setting up a web page and offering his time to put together a one-week computer training and organizational workshop for the participants, he has clearly stated that there is no additional money within FIDAMERICA for this effort. One project director has been collaborative, in the sense that he would like to integrate this project with the planned construction of office centers for new agricultural cooperatives in his region. On the other hand, the FIDAMERICA life histories represented an expansion of the collaborative testimonio process applied to a progressive and innovative experiment in challenging dominant cyberspace. It gave top administrators and project staff of IFAD and FIDAMERICA projects and other interested transnational parties the opportunity to listen to the voices of rural women; it set up a preliminary collaborative structure for building, layering and creating knowledge and political action; it positively impacted the authors in several ways; and it modeled alternative subjectivities. In all these ways, it began to systematize the use of life history writing as a ICT related development tool. In the end the Concurso de Mujeres represents the mixed potential of a collaborative cybernetic process at this scale. Website gatekeepers can passively “disappear” information; collections, discussions and interpretations of original material can adjust original meanings intended by life history authors; institutional financial support can be “unavailable” to continue the project; or the ball can be dropped completely on a project. In these perhaps unintentional but unfortunate erasures, voices stay marginalized. On the other hand, while it can be argued that the Concurso de Mujeres has not provided tangible, direct benefits to the women participants so far, it has had indirect effects on IFAD staff, for the authors themselves, and it attracted my attention as a sympathetic northern researcher and inspired my activist objectives to help develop a cybernetwork for this group. From an actor-network perspective, the current gap in movement towards the production of a network can also be interpreted in the frame of a blank figure.60 The blank figure represents nothing, and certainly, there are important hurdles to be crossed to continue the work of the Concurso. However, since my visit to the authors and IFAD staff, the idea of a campesinas' network has been planted. No longer is it an empty blank. It is now a blank space that holds a vision for what might lie ahead. As Metcalfe (2001, p. 247) argues: Although we routinely talk of distance, separation always retains an implicit sense of connection. Surrounding ever thing is no-thing, a ground or horizon which is and isn't there. This nothing is formless flesh which holds in place the things that, in turn, hold it. Kaplan (1992, p. 135) calls a transnational approach that emphasizes collaborative work like that shown in the FIDAMERICA life histories, “feminist writing technologies.” She argues that this approach “can transform cultural production from individualized and aestheticized procedures to collaborative, historicized, transnational coalitions.” In doing so, it can incorporate difference and still achieve feminist agendas based on common problems that operate in different ways in different places. This would be an important step in incorporating disenfranchised rural women on their own terms into the process of gendering ICT related development and governance policies at state, regional and global levels.61 In the actor-network sense, it is possible to situate the Concurso into IFAD's larger regionalization of gender mainstreaming and leadership development, which is in turn situated within broader networks of gender and ICT4D policymaking. New IFAD projects in Honduras (and to a certain extent in El Salvador) 62 have been designed to transfer complete planning and development power and initiative to the beneficiaries; and this would bode well for ongoing leadership and empowerment for the rural women who are part of this process. Yet, as ICTs become an increasing part of development, how will IFAD integrate these technological elements more directly into its GAD agenda? The experience of the Concurso de Mujeres suggests that IFAD is not quite ready to transfer control of this technology from the institutional level to the grassroots level. Yet, for rural women in an era of ICT4D, access to the technology, capacity to envision its potential, and the use of its communicative processes are vital to their ability to influence the creation of a more participatory, empowered and transformative form of ICT4D. Will technological bias prove to be the barrier that it has often been for women in development, or will campesinas be able to fully link to cybernetic actor networks that have been created by IFAD, and in doing so, surmount this historical border?