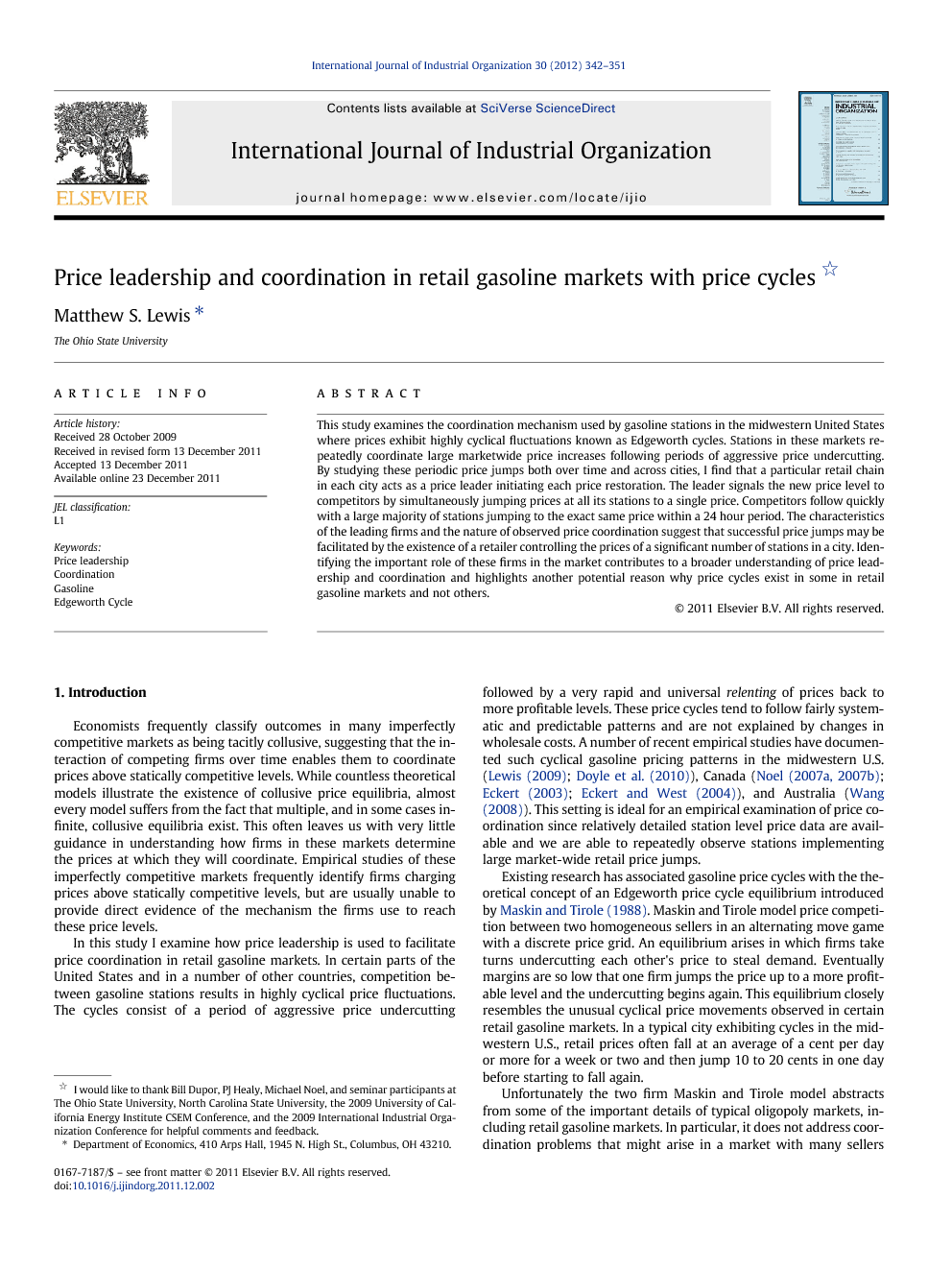 This study examines the coordination mechanism used by gasoline stations in the midwestern United States where prices exhibit highly cyclical fluctuations known as Edgeworth cycles. Stations in these markets repeatedly coordinate large marketwide price increases following periods of aggressive price undercutting. By studying these periodic price jumps both over time and across cities, I find that a particular retail chain in each city acts as a price leader initiating each price restoration. The leader signals the new price level to competitors by simultaneously jumping prices at all its stations to a single price. Competitors follow quickly with a large majority of stations jumping to the exact same price within a 24 hour period. The characteristics of the leading firms and the nature of observed price coordination suggest that successful price jumps may be facilitated by the existence of a retailer controlling the prices of a significant number of stations in a city. Identifying the important role of these firms in the market contributes to a broader understanding of price leadership and coordination and highlights another potential reason why price cycles exist in some in retail gasoline markets and not others.

This paper provides the most complete and detailed cross-market investigation to date on price restorations in U.S. retail gasoline markets with price cycles. It reveals new evidence of an unusually high level of coordination both within firms and amongst competing stations. During a typical restoration, prices at nearly all stations jump within a 24 hour period and a large majority of these prices jump to the exact same price level. The evidence suggests that a particular firm acts as a price leader for the city, initiating the restoration and unifying prices at its stations to signal to competitors what the new price level should be. Two specific retail chains appear to be responsible for leading price restorations in most cycling retail gasoline markets in the United States. These firms own and operate a large number of stations, which gives them the ability to directly control and coordinate prices at many stations within each market. Cycles occur in nearly every city in which these two firms operate a significant share of retail stations, and cycles are absent from almost every city in which these firms have little or no market presence. The pricing strategies observed and the strong geographical correspondence between cycles and the presence of these retailers suggest that the role they play during price restorations could be important to the existence of cycles. Unfortunately, having large retail chains does not appear to guarantee cycles. A number of other retailers, such as Circle K and The Pantry (Kangaroo Express), also own and operate a large number of stations in multiple markets where cycles do not occur. It is not clear whether Speedway and Quik Trip are unique in some way, or whether they have simply chosen to act as price leaders in markets where cycles were already occurring. Future research exploiting variation over time in market structure and the presence of cycles across markets could potentially reveal a more concrete link between market structure and the existence of price cycles. Regrettably, there do not appear to be any U.S. cities in which price cycles have started or stopped within the last 5 years, so this type of variation may be difficult to find.