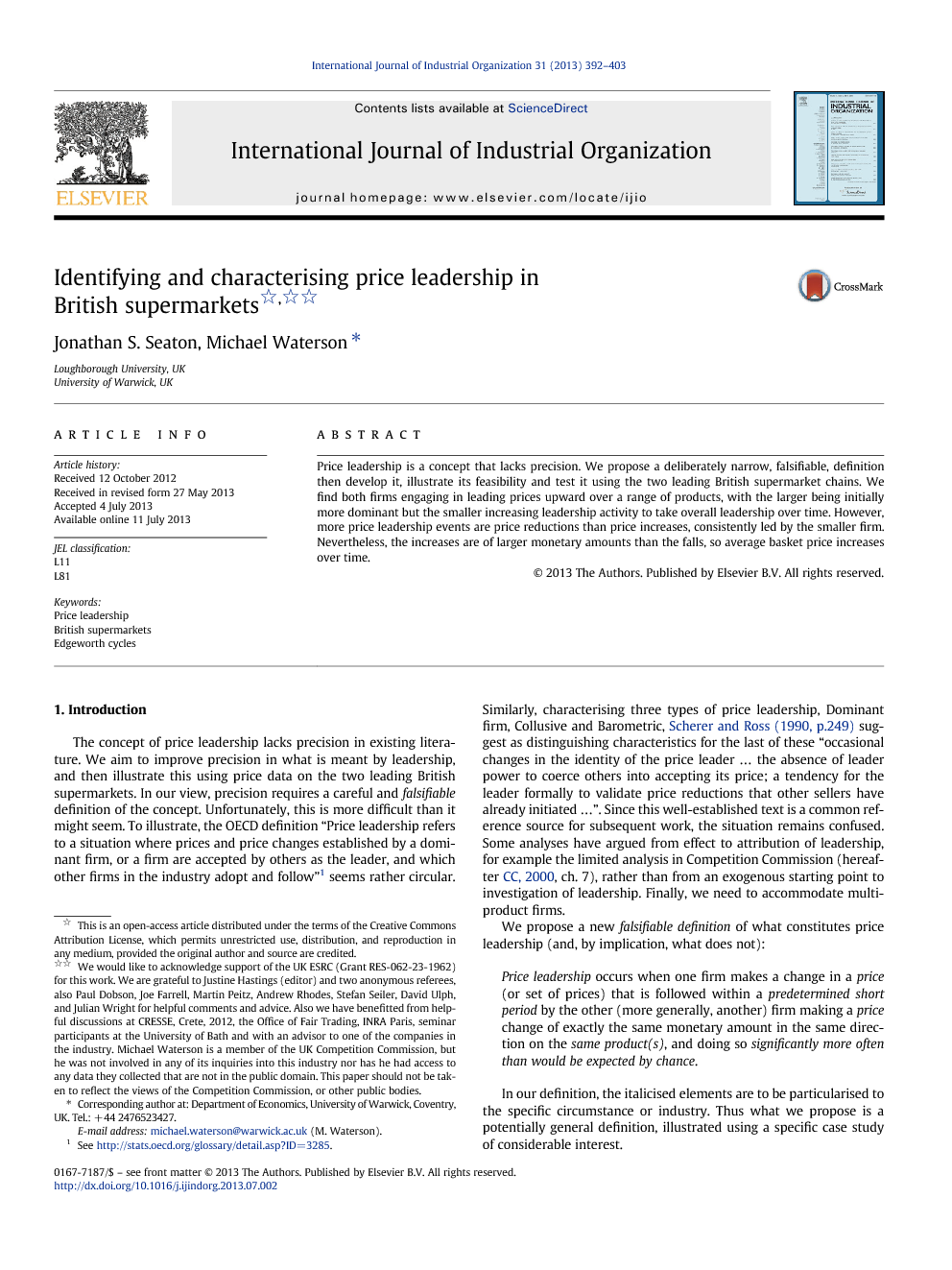 Price leadership is a concept that lacks precision. We propose a deliberately narrow, falsifiable, definition then develop it, illustrate its feasibility and test it using the two leading British supermarket chains. We find both firms engaging in leading prices upward over a range of products, with the larger being initially more dominant but the smaller increasing leadership activity to take overall leadership over time. However, more price leadership events are price reductions than price increases, consistently led by the smaller firm. Nevertheless, the increases are of larger monetary amounts than the falls, so average basket price increases over time.

The concept of price leadership lacks precision in existing literature. We aim to improve precision in what is meant by leadership, and then illustrate this using price data on the two leading British supermarkets. In our view, precision requires a careful and falsifiable definition of the concept. Unfortunately, this is more difficult than it might seem. To illustrate, the OECD definition “Price leadership refers to a situation where prices and price changes established by a dominant firm, or a firm are accepted by others as the leader, and which other firms in the industry adopt and follow” 1 seems rather circular. Similarly, characterising three types of price leadership, Dominant firm, Collusive and Barometric, Scherer and Ross (1990, p.249) suggest as distinguishing characteristics for the last of these “occasional changes in the identity of the price leader … the absence of leader power to coerce others into accepting its price; a tendency for the leader formally to validate price reductions that other sellers have already initiated …”. Since this well-established text is a common reference source for subsequent work, the situation remains confused. Some analyses have argued from effect to attribution of leadership, for example the limited analysis in Competition Commission (hereafter CC, 2000, ch. 7), rather than from an exogenous starting point to investigation of leadership. Finally, we need to accommodate multiproduct firms. We propose a new falsifiable definition of what constitutes price leadership (and, by implication, what does not): Price leadership occurs when one firm makes a change in a price (or set of prices) that is followed within a predetermined short period by the other (more generally, another) firm making a price change of exactly the same monetary amount in the same direction on the same product(s), and doing so significantly more often than would be expected by chance. In our definition, the italicised elements are to be particularised to the specific circumstance or industry. Thus what we propose is a potentially general definition, illustrated using a specific case study of considerable interest. This definition necessarily excludes: simultaneous price changes, those followed with a long lag, price changes of similar monetary amounts, or on a similar but not the same product. It is clearly falsifiable since it may not occur. More positively, the definition identifies candidate cases of which firm is engaging in leadership on which products when. Leadership is deliberately defined narrowly, choosing a specific interval to reduce the possibility that chance movements are included, but allowing time for reaction, so the bias if any is towards not observing it when it occurs. Moreover, by maintaining a tight definition of candidate cases, robust testing against the alternative of chance observation can be performed, thereby sifting from candidate cases those that occur significantly more often than expected by chance. These become our clear cases of leadership. As an empirical case study, we examine leadership behaviour in the British supermarket industry, a significant market and one which has the useful institutional feature of national pricing. Here, for reasons spelt out below in describing the industry, there are two clear leadership candidates, Tesco and Asda. We examine their pricing behaviour using our new leadership concept. Significant features of the industry lead us to particularise the proposed definition. Specifically, we define what we mean by price and by product and starting point, choose the short period of response by the follower, develop and employ a test of whether leadership happens more often than may be expected, and define sub-types of leadership. Previewing results, we find considerable evidence that leadership exists. Most strikingly, we find that whilst Tesco appears commonly to lead prices upward in the first four years of our sample, there is a clear switch whereby over the last three years Asda comes to dominate leads upward. However, we observe significantly more leadership in price reductions than in price rises. Asda is more involved in reductions than Tesco, but both are extremely active in leading reductions, particularly in our later years. These results bring out certain features that theoretical models have suggested, most obviously the switch of leadership between firms and the smaller firm being more involved in leading falls. Our plan is as follows. We outline the analytical literature in Section 2. We then describe the industry (Section 3), the nature of our sample data (Section 4) and general features of pricing behaviour in the industry (Section 5). Section 6 particularlises the definition above to the British supermarket industry. Our characterisation of leadership and our analysis of overall leadership, including distinguishing it from random behaviour, is carried out in Section 7, the core of the paper. We move on in Section 8 to looking at more disaggregated levels of price leadership. Finally, Section 9 offers a brief conclusion relating the findings to the theory. We do not draw normative conclusions.

We have proposed a very tight, falsifiable, definition of price leadership then developed it, applied it to a particularly significant market and tested for significance. Although the definition is tight, we observe leadership to be a very common phenomenon, across the firms, products and time; it cannot be explained away as randomness in the data. It also appears that leadership, as narrowly defined, has become more important in recent years as a phenomenon in the British supermarket industry. But we cannot identify either firm as the consistent food market leader. Leadership differs over products as well as time, particularly regarding upward price leadership, where it clearly switches from Tesco to Asda in the latter years of our sample. This is consistent with the more recent theoretical literature's emphasis on endogenous upward leadership and occasional changes in leadership engendered by shifts in loyalty, rather than leadership by a single dominant firm, or the largest firm. There is no evidence that it is related to collusion, although there is limited evidence of it influencing pricing levels. The extensive downward price leadership is, in some instances, consistent with cycles of the Edgeworth kind. Of course, the theory does not predict that Edgeworth cycles are the only outcome, merely a distinctive one. Also, consistent with Eckert's (2003) theoretical predictions, Asda, the smaller firm, dominates overall in downward price moves. We are necessarily agnostic on whether the price moves relate closely to underlying changes in costs. Overall however, what we observe, including the relative focus on branded goods, is also consistent with a casual theory in which supermarkets are very concerned about their position on price comparisons for particular products. Thus we see substantial volumes of downward price moves on branded products, not necessarily fitting closely to Edgeworth cycles, followed defensively by the other player, presumably in order that their supermarket is not judged by consumers as being relatively expensive. Our aim has been to analyse leadership behaviour in the industry using a framework where we test for significance against random alternatives and linking it to established positive models of the phenomenon. Whilst we have limited evidence in one category of goods (Bread and Cereals) that products led upwards increase more in price than others not led, this is far from a conclusion that price leadership is a major driver of rapid price increases, particularly given the extent to which downward price leadership is observed.