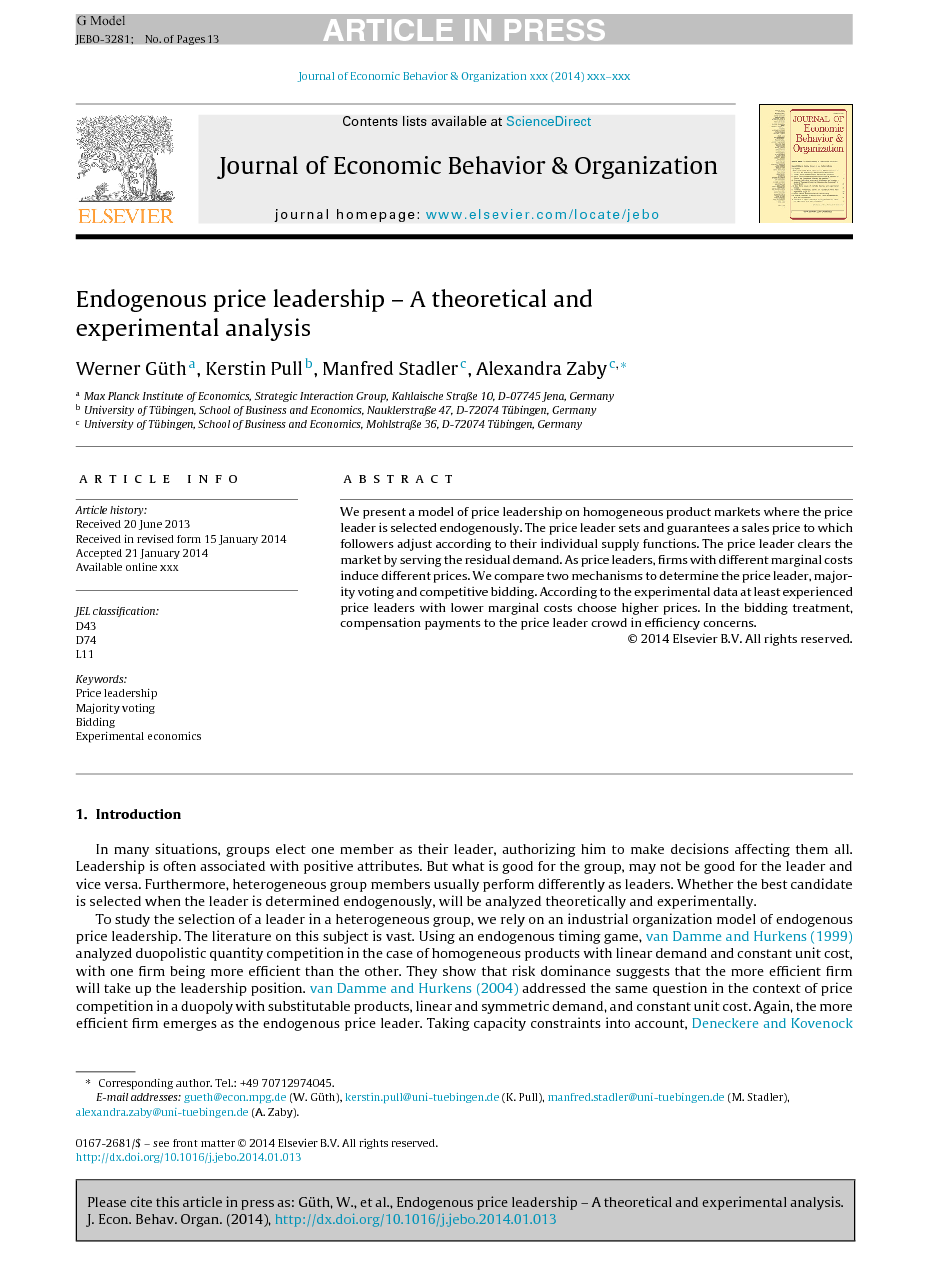 In many situations, groups elect one member as their leader, authorizing him to make decisions affecting them all. Leadership is often associated with positive attributes. But what is good for the group, may not be good for the leader and vice versa. Furthermore, heterogeneous group members usually perform differently as leaders. Whether the best candidate is selected when the leader is determined endogenously, will be analyzed theoretically and experimentally. To study the selection of a leader in a heterogeneous group, we rely on an industrial organization model of endogenous price leadership. The literature on this subject is vast. Using an endogenous timing game, van Damme and Hurkens (1999) analyzed duopolistic quantity competition in the case of homogeneous products with linear demand and constant unit cost, with one firm being more efficient than the other. They show that risk dominance suggests that the more efficient firm will take up the leadership position. van Damme and Hurkens (2004) addressed the same question in the context of price competition in a duopoly with substitutable products, linear and symmetric demand, and constant unit cost. Again, the more efficient firm emerges as the endogenous price leader. Taking capacity constraints into account, Deneckere and Kovenock (1992), Furth and Kovenock (1993) and Canoy (1996) show in a variety of circumstances that in a duopolistic setting both firms prefer the more efficient firm to lead. We deviate from this strand of literature in at least three ways. First, by relying on the model of a dominant firm with competitive fringe, we extend the price-leadership model along the lines suggested by Ono (1982) or Güth et al. (1989) and allow for more than two firms in the market, but restrict ourselves to the case of three firms in order to experimentally implement the model. Second, we account for increasing unit cost. Third, since our focus is on the incentives for voluntary cooperation via price leadership, we enrich the setup by two alternative mechanisms to endogenously select the price leader, namely majority voting and competitive bidding. By implementing the enriched model experimentally, we provide additional empirical findings to the already available experimental evidence (see, e.g., Kübler and Müller, 2002). In our model, the price leader sets a price to which all other competitors, the followers, adjust their sales amount optimally according to their individual supply functions. To guarantee his price choice, the leader serves the residual demand.1 Obviously, followers are interested in a high price. The highest price occurs when the lowest cost competitor acts as price leader. Asking a competitor to act as price leader is justifiable since the price leader is not forced to choose a higher than competitive price.2 Furthermore, followers could reward the price leader by smaller than optimal quantities in case of higher than competitive prices. In line with the price leadership literature the leader is assumed to credibly commit to his price. More basically, leadership refers to a more or less hierarchical structure of interaction. In modern market economies, entrepreneurs or chief executive officers mostly play the role of a decisive leader. Other examples are technological leaders or simply sellers who, as in our model, precommit before others. Whereas our model assumes that leader and followers determine different action variables, namely the uniform price respectively their sales quantities, most other leadership models rely on the same type of choices by leaders and followers, e.g., on markets with quantity competition or in public good experiments with “leading by example” (see Cappelen et al., 2013). In the latter type of experiments, unlike in our scenarios, the benchmark solution, which is based on common opportunism, fails to predict voluntary cooperation via leadership. We compare two mechanisms3 to award the leadership role in price setting, one mechanism where no other reciprocation is possible than via sales reduction and one allowing to monetarily reward the price leader: majority voting (the firm with the most votes becomes price leader) and competitive bidding (sellers determine monetary compensations for the price leader). Both mechanisms share the intuition that a lower cost competitor is the more likely price leader, whereas compensation payments in the bidding treatment are expected to crowd in efficiency concerns of price leaders. The remainder of the paper is structured as follows: In Section 2, we introduce a triopoly model of price leadership. In Section 3, we endogenize price leadership by a voting and a bidding scenario. Section 4 describes the experimental protocol. The experimental findings are presented in Section 5. Section 6 concludes.

Price leadership on oligopolistic product markets is an appealing approach to explain and justify market clearing prices in the tradition of methodological individualism according to which social phenomena are based on individual choice making. It also allows for moderate cooperation enabling firms to earn higher profits than when selling at the competitive price. By inducing a moderate price increase, price leadership may not arouse the suspicion of antitrust authorities. Even if detected, it would most certainly not be considered illegal. What should prevent one competitor from setting a price to which all other competitors adjust with the price leader serving the residual demand? To the best of our knowledge, such behavior is not illegal, and even if so, it could hardly be verified by antitrust authorities. We have analyzed price leadership on a homogeneous market with three asymmetric competitors determining endogenously who takes on the role of the price leader. The distinction between the alternative mechanisms bidding and voting was implemented experimentally by carrying out two separate treatments. The main experimental result regarding the establishment of a price leader is that in the voting but not in the bidding treatment, firms with higher marginal costs try, and mostly succeed, to establish the lowest cost competitor as price leader. Regarding the price setting behavior, we found that optimal price choices of low and high cost sellers are more frequent in the bidding treatment. Thus, as expected, monetary compensation of the price leader crowds in efficiency concerns. Further we found that experienced price leaders with lower marginal costs choose higher prices in both treatments. Finally, considering the decisions of followers, our analysis revealed that optimal quantity choices in both treatments are close to the theoretically predicted outcome for low and medium cost followers. Thus, although experimental outcomes partly differ from the theoretically predicted ones, the main qualitative predictions are confirmed. Most importantly, we find that lower marginal costs of price leaders indeed result in higher market prices when participants are more experienced and have learned to behave more adequately in the rather demanding experimental scenarios. Which qualitative effects are confirmed or not depends partly on conditions such as (in)experience (see Results Result 2a and Result 2b) or the mechanism for establishing the price leader (compare Results Result 1a and Result 1b). These conditions also affect – game theoretically – unpredicted path dependence (see Result 2a).8 Regarding the mechanism to establish the price leader, we provide, at best, some guidance as to which of the two mechanisms is better. In the field, what matters most is probably to prevent observability and verifiability by antitrust authorities. In our setup, this seems to suggest the voting rather than the bidding mechanism due to the monetary transfers of the latter. In the real world, we cannot expect that firms will actually agree on a voting or bidding mechanism, meaning that both mechanisms are only proxies for some unknown procedures. It may be that price leadership is rather spontaneous or the result of a negotiation, whose likely outcomes are captured by the proposed voting or bidding mechanism.