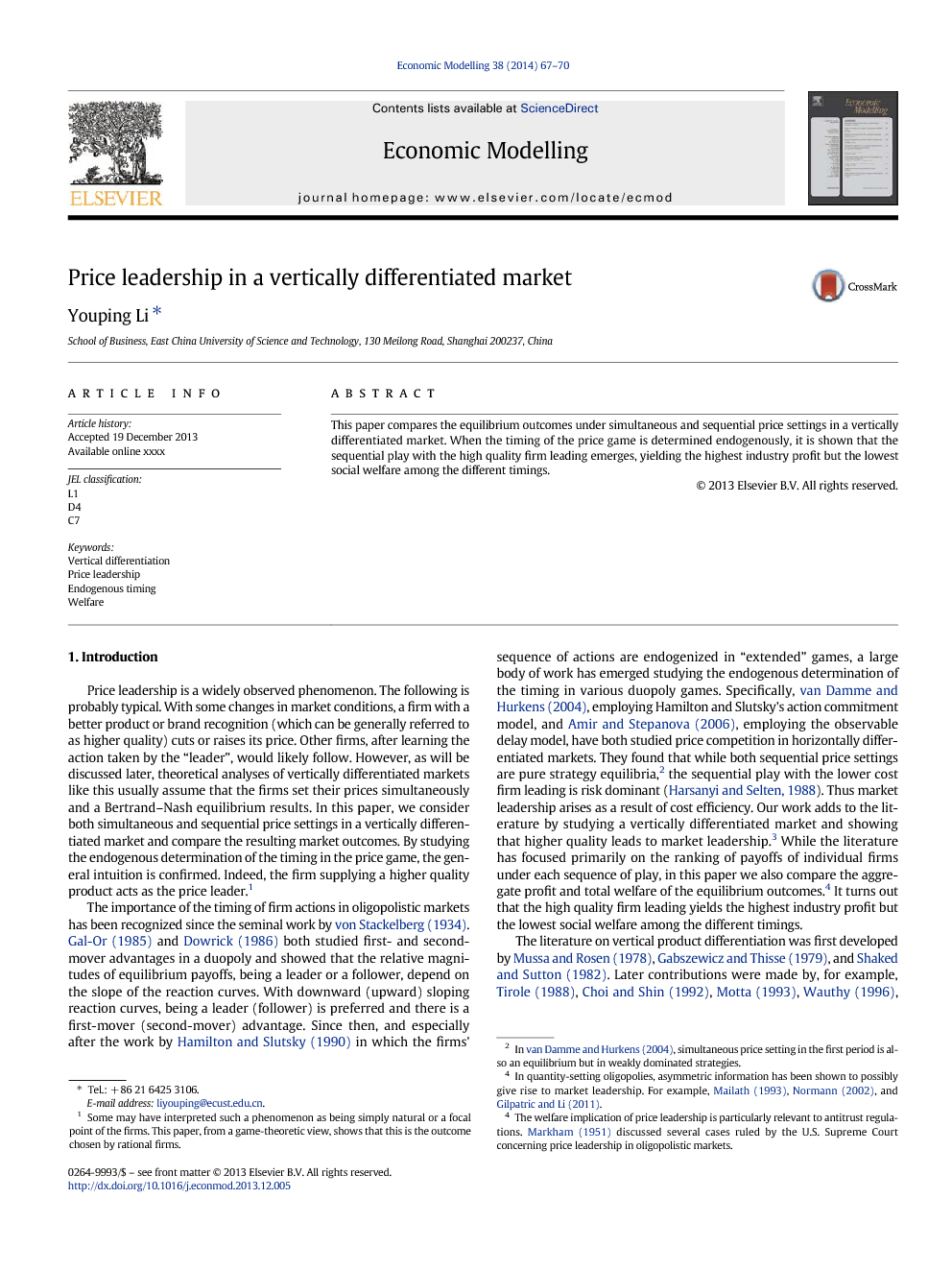 This paper compares the equilibrium outcomes under simultaneous and sequential price settings in a vertically differentiated market. When the timing of the price game is determined endogenously, it is shown that the sequential play with the high quality firm leading emerges, yielding the highest industry profit but the lowest social welfare among the different timings.

Price leadership is a widely observed phenomenon. The following is probably typical. With some changes in market conditions, a firm with a better product or brand recognition (which can be generally referred to as higher quality) cuts or raises its price. Other firms, after learning the action taken by the “leader”, would likely follow. However, as will be discussed later, theoretical analyses of vertically differentiated markets like this usually assume that the firms set their prices simultaneously and a Bertrand–Nash equilibrium results. In this paper, we consider both simultaneous and sequential price settings in a vertically differentiated market and compare the resulting market outcomes. By studying the endogenous determination of the timing in the price game, the general intuition is confirmed. Indeed, the firm supplying a higher quality product acts as the price leader.1 The importance of the timing of firm actions in oligopolistic markets has been recognized since the seminal work by von Stackelberg (1934). Gal-Or (1985) and Dowrick (1986) both studied first- and second-mover advantages in a duopoly and showed that the relative magnitudes of equilibrium payoffs, being a leader or a follower, depend on the slope of the reaction curves. With downward (upward) sloping reaction curves, being a leader (follower) is preferred and there is a first-mover (second-mover) advantage. Since then, and especially after the work by Hamilton and Slutsky (1990) in which the firms' sequence of actions are endogenized in “extended” games, a large body of work has emerged studying the endogenous determination of the timing in various duopoly games. Specifically, van Damme and Hurkens (2004), employing Hamilton and Slutsky's action commitment model, and Amir and Stepanova (2006), employing the observable delay model, have both studied price competition in horizontally differentiated markets. They found that while both sequential price settings are pure strategy equilibria,2 the sequential play with the lower cost firm leading is risk dominant (Harsanyi and Selten, 1988). Thus market leadership arises as a result of cost efficiency. Our work adds to the literature by studying a vertically differentiated market and showing that higher quality leads to market leadership.3 While the literature has focused primarily on the ranking of payoffs of individual firms under each sequence of play, in this paper we also compare the aggregate profit and total welfare of the equilibrium outcomes.4 It turns out that the high quality firm leading yields the highest industry profit but the lowest social welfare among the different timings. The literature on vertical product differentiation was first developed by Mussa and Rosen (1978), Gabszewicz and Thisse (1979), and Shaked and Sutton (1982). Later contributions were made by, for example, Tirole (1988), Choi and Shin (1992), Motta (1993), Wauthy (1996), Aoki and Prusa (1997), Lehmann-Grube (1997), Zhou et al. (2002), Toshimitsu (2003), Toshimitsu and Jinji (2007), and Boccard and Wauthy (2010). But a common assumption has been that the price game between a high quality firm and a low quality firm is played simultaneously. To our knowledge, the only paper that considered sequential price setting in a vertically differentiated market is Lambertini (1996), in which the firms choose their roles both in the quality stage and in the price stage at the beginning of the game. It was shown that when the market is not fully covered (i.e., some consumers purchase the product while others do not), the mostly commonly used model of vertically differentiated markets, firms play simultaneously in both stages so price leadership does not arise. A major difference of our model is that the choice of the timing in the price game is made after the qualities of the firms' products are determined. Specifically, in our model the qualities are modeled as exogenous. 5 This setup is consistent with the literature on endogenous timing and captures the fact that many price settings are only temporary responses to short-term market fluctuations whereas technological investments to improve quality are usually made in a long time horizon. Besides, we follow the recent development in the endogenous timing literature and make the equilibrium selection based on the criterion of risk dominance when multiple equilibria exist. We are able to conclude that the rather intuitive outcome, sequential price setting with the high quality firm leading, emerges endogenously. The remainder of the paper is organized as follows. In Section 2, the model is set up and the equilibrium outcomes under each sequence of price settings are derived and compared. In Section 3, the extended game with observable delay of Hamilton and Slutsky (1990) is employed to endogenously determine the timing of the price game. Section 4 concludes the paper.

This paper compares the equilibrium outcomes under simultaneous and sequential price settings in a vertically differentiated market. Some of the not so intuitive results include: (i) The low quality firm charges the same price and the same group of consumers make a purchase under the two sequential price settings with either firm leading; (ii) The sequential play with the high quality firm leading yields the highest industry profit; and (iii) The sequential play with the low (high) quality firm leading results in the highest (lowest) social welfare while the Bertrand simultaneous play yields a level of welfare that is in the middle. When the timing of the price game is determined endogenously, the least efficient outcome emerges, with the high quality firm leading, yielding the highest industry profit but the lowest consumer surplus. Given that there is a second mover advantage in the price game, one may reasonably think that, compared with when a Bertrand game is assumed, the increase to the low quality firm's incentive to improve its quality is larger than that to the high quality firm. Consequently, the quality differential between the two firms' products would be narrower. This is indeed the case if investment in quality is costless. Given that the high quality firm will act as the price leader, the equilibrium quality choices would satisfy s2/s1 = 2/3, implying a smaller disparity compared with when simultaneous pricing is assumed, in which case s2/s1 = 4/7 ( Choi and Shin, 1992). However, when the cost of investment is considered, the intuition may not necessarily carry over. As was shown in Aoki and Prusa (1997) and Toshimitsu (2003), the strategic relationship between the two quality levels, being complements or substitutes, depends on their relative magnitudes. Without possibly restrictive assumptions on the shape of the cost functions (on which the equilibrium quality levels depend), the result is generally ambiguous.