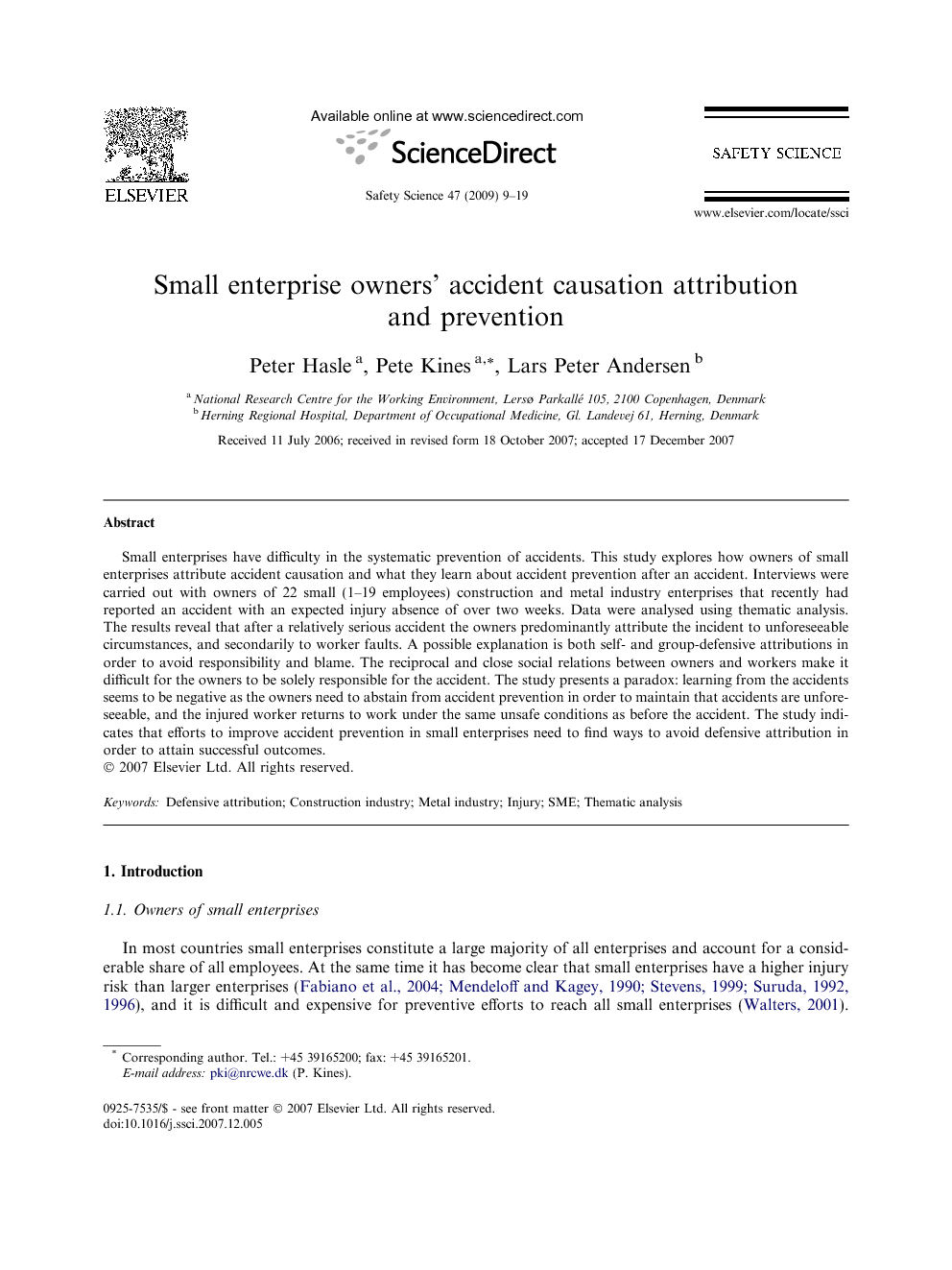 Small enterprises have difficulty in the systematic prevention of accidents. This study explores how owners of small enterprises attribute accident causation and what they learn about accident prevention after an accident. Interviews were carried out with owners of 22 small (1–19 employees) construction and metal industry enterprises that recently had reported an accident with an expected injury absence of over two weeks. Data were analysed using thematic analysis. The results reveal that after a relatively serious accident the owners predominantly attribute the incident to unforeseeable circumstances, and secondarily to worker faults. A possible explanation is both self- and group-defensive attributions in order to avoid responsibility and blame. The reciprocal and close social relations between owners and workers make it difficult for the owners to be solely responsible for the accident. The study presents a paradox: learning from the accidents seems to be negative as the owners need to abstain from accident prevention in order to maintain that accidents are unforeseeable, and the injured worker returns to work under the same unsafe conditions as before the accident. The study indicates that efforts to improve accident prevention in small enterprises need to find ways to avoid defensive attribution in order to attain successful outcomes.

1.1. Owners of small enterprises In most countries small enterprises constitute a large majority of all enterprises and account for a considerable share of all employees. At the same time it has become clear that small enterprises have a higher injury risk than larger enterprises (Fabiano et al., 2004, Mendeloff and Kagey, 1990, Stevens, 1999, Suruda, 1992 and Suruda, 1996), and it is difficult and expensive for preventive efforts to reach all small enterprises (Walters, 2001). A growing number of studies have focused on the ability of small enterprises to assess and control risks (For reviews see Champoux and Brun, 2003 and Hasle and Limborg, 2006). In comparison to larger enterprises, small enterprises are usually characterised by limited resources – both financially and on the management side. This characteristic has been a focus point in the business research literature for many years (Beaver, 2003, Goffee, 1996, Martin and Staines, 1994 and Scase and Goffee, 1980). The owner is often also the manager and has to deal with a number of different administrative and management issues such as sales, planning, human resources, finance, accounting and billing. On top of this, many owners in the smallest enterprises are involved in practical work as well. Due to their many different tasks the owner/managers tend to carry out on-the-spot problem solving with little consideration for the long term affects of their decisions. It is evident that these limited resources make it difficult to apply more systematic approaches to health and safety, as is found in larger enterprises. Health and safety legislation requirements are generally not followed, particularly regarding risk assessment and control, safety meetings are rarely held, problems are dealt with on an ad hoc basis, and little is written down (Walters, 2001). The owner is the key to understanding both risk control and the operation of the small enterprise, and is the dominant actor in relation to any changes made. The personal values and priorities of the owner are determinants of the culture, social relations and the attitude of the enterprise regarding the work environment (Antonsson et al., 2002, Eakin, 1992, Hasle, 2000 and Stephens et al., 2004). It is, therefore, important to explore the owner’s understanding and approach to risk and risk control. This has been discussed in the literature in relatively broad terms, but with limited empirical support (Antonsson et al., 2002, Barbeau et al., 2004 and Mayhew, 1997). 1.2. Accidents and defensive attribution in small enterprises The owners’ approach to risk control likely develops from practical experience in the daily operations of the enterprise, as well as prior work experience and experience shared with colleagues in the sector. Yet it is well known that written information about safety plays a minor role in small enterprises (Hasle and Limborg, 2006). The actual occurrence of an accident is likely to play an important role in the development of risk perception and the importance of risk control. The study of owners’ interpretation of the causes of an accident in their enterprise, and their subsequent behaviour after the accident is a possible way to explore the owners’ attitude towards risk. The process of investigating an accident involves not only the identification of internal (e.g. behaviour) and external (e.g. technical, environment and culture) rational elements, but also elements of responsibility, fault, and possible blame (DeJoy, 1994 and Shannon et al., 1997). Analyses of accident causal attribution, the importance of which in the safety and psychosocial literature is well documented, are relevant analytical approach for explorative and descriptive studies of the work environment (DeJoy, 1990 and Gyekye and Salminen, 2006). Self- or group-defensive attribution biases are common in occupational accidents, whereby people have a tendency to want to protect themselves or their group from blame or prejudice though the externalisation of causality. These causal attributions, rather than the actual causes, often determine if and what accident preventive measures are implemented (DeJoy, 1994 and Woodcock et al., 2005). There has been focus on the role of hierarchical and group level effects on self- and group-defensive attributions, but only in respects to fairly large sized enterprises with formal structures (Gyekye and Salminen, 2006, Kouabenan et al., 2001, Lehane and Stubbs, 2001 and Salminen, 1992). To date there are no studies that have looked at defensive attribution in small enterprises where formal structures and hierarchies are quite different from larger enterprises. Employers and employees tend to have closer social relations (Hasle and Limborg, 2006) which could strengthen self- and group-defensive attributions. The metal and construction industries are two industries with a high risk of serious injury (Flanagan et al., 1998 and Kines, 2001), and subsequent lengthy work absence (Kines et al., 2007). Preliminary analyses to this study showed that in the period 1999–2003 30% and 36% of all the reported accidents by small enterprises in the Danish metal and construction industries, respectively, involved an expected injury absence of over 14 days. The data are unfortunately strongly biased by underreporting, but they do provide some indication as to the need for accident and injury absence reduction in the two sectors. Enterprise size itself will also play a role for owners’ risk perception and approach to risk control, as accidents occur relatively infrequently, in comparison to larger enterprises, e.g. small enterprises may never experience a serious accident or there may be several years between them. In the preliminary analyses to this study an average of only one in every seven small enterprises per year reported an accident with an expected injury absence of over 14 days, whereas larger enterprises reported an average of 1.5 of the lengthy injury absences per year. Moreover, the severity of an accident/injury may play a role, as accidents resulting in minor injury may have little or no economic or organisational consequences for the small enterprise, whereas a more severe injury with several week’s absenteeism, may lead the owner to consider aspects of risk control. The purpose of this study was to explore accident causal attribution and prevention from the perspective of owners of small enterprises in relation to their experience with a recent long injury absence.

The study shows that circumstances unique to small construction and metal enterprises (such as the close social relationships) contribute to their owners predominantly attributing the causes of accidents to unforeseeable circumstances, and the owners reject that circumstances under their control have caused the accident. Subsequently, there is little organisational learning from the accident, and the injured workers often return to work under the same unsafe conditions as before the accident. There is a need for educating owners and workers about multiple contributing accident factors and attribution bias, if they are to identify relevant and effective accident prevention measures. Safety professionals (such as inspectors and consultants) must keep in mind that the manner in which the owners of small enterprises deal with health and safety can be quite different from those in larger enterprises. A recent anthropological study on safety in the construction industry (Baarts, 2004), suggests that in order to change fatalistic attitudes towards safety, safety professionals may have to acknowledge that many owners perceive accidents as being due to unforeseeable circumstances, and to take it from there. An important element would be to look more at the positive side of learning situations (Kogi, 2006), such as an enterprises achievements as well as where there are possibilities for further improvements. This is a difficult but necessary prerequisite for a positive learning circle, where otherwise negative learning from accidents will prevail due to defensive causal attribution. By focusing on positive learning it may be possible to develop the necessary trust-based dialogue between the third party safety professional, the owner and the employees.