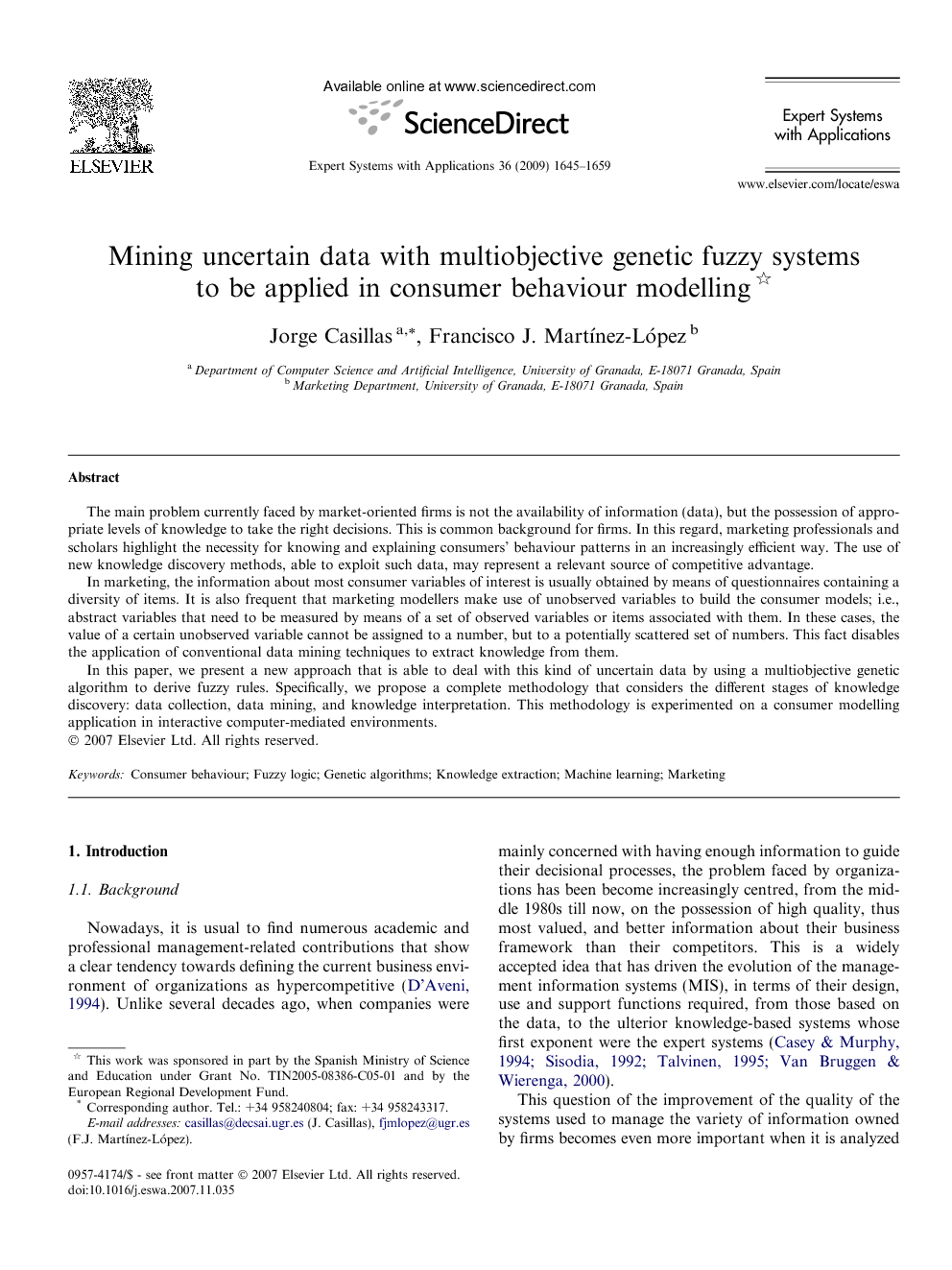 The main problem currently faced by market-oriented firms is not the availability of information (data), but the possession of appropriate levels of knowledge to take the right decisions. This is common background for firms. In this regard, marketing professionals and scholars highlight the necessity for knowing and explaining consumers’ behaviour patterns in an increasingly efficient way. The use of new knowledge discovery methods, able to exploit such data, may represent a relevant source of competitive advantage. In marketing, the information about most consumer variables of interest is usually obtained by means of questionnaires containing a diversity of items. It is also frequent that marketing modellers make use of unobserved variables to build the consumer models; i.e., abstract variables that need to be measured by means of a set of observed variables or items associated with them. In these cases, the value of a certain unobserved variable cannot be assigned to a number, but to a potentially scattered set of numbers. This fact disables the application of conventional data mining techniques to extract knowledge from them. In this paper, we present a new approach that is able to deal with this kind of uncertain data by using a multiobjective genetic algorithm to derive fuzzy rules. Specifically, we propose a complete methodology that considers the different stages of knowledge discovery: data collection, data mining, and knowledge interpretation. This methodology is experimented on a consumer modelling application in interactive computer-mediated environments.

Nowadays, it is usual to find numerous academic and professional management-related contributions that show a clear tendency towards defining the current business environment of organizations as hypercompetitive (D’Aveni, 1994). Unlike several decades ago, when companies were mainly concerned with having enough information to guide their decisional processes, the problem faced by organizations has been become increasingly centred, from the middle 1980s till now, on the possession of high quality, thus most valued, and better information about their business framework than their competitors. This is a widely accepted idea that has driven the evolution of the management information systems (MIS), in terms of their design, use and support functions required, from those based on the data, to the ulterior knowledge-based systems whose first exponent were the expert systems (Casey and Murphy, 1994, Sisodia, 1992, Talvinen, 1995 and Van Bruggen and Wierenga, 2000). This question of the improvement of the quality of the systems used to manage the variety of information owned by firms becomes even more important when it is analyzed within the framework of the marketing function; the business area primarily responsible for managing the relations with consumers, i.e., the firm’s target. As Li, Kinman, Duan, and Edwards (2000) note, considering the characteristics related to the competitive environment of firms, marketing strategies directed to markets must be based on an accurate knowledge of the consumers’ preferences and behaviour. In this task, the application of suitable marketing management support systems (MkMSS) to the analysis of data plays a notable role (Wierenga and Van Bruggen, 1997 and Wierenga and Van Bruggen, 2000). It is not unusual, therefore, to observe the intensification in the use of knowledge-based MkMSS by firms in recent years (Shim et al., 2002 and Wedel et al., 2000). This evolution of the MkMSS towards systems based on methodologies imported from the artificial intelligence area have tried to fulfil the demands of marketing managers and modellers in terms of working with methods of analysis that are more flexible, powerful and robust, and capable of providing greater and improved information with respect to consumers’ behaviour (Lilien, Kotler, & Moorthy, 1992). In this sense, though it is well known that the marketing expert systems were, in line with the MIS framework, the first knowledge-based systems applied to support the marketing managers’ decision processes, there have been significant and interesting advances, some of them very recent, such as those based on artificial neural networks, case-based reasoning, clustering, decision trees, or fuzzy systems (Akhter et al., 2005, Ha and Park, 1998, Li et al., 2000 and Wierenga and Van Bruggen, 2000). In any case, regardless of the marketing knowledge-based system we consider, each has one thing in common, the use of knowledge discovery in databases (KDD) methodologies (Fayyad, Piatesky-Shapiro, Smyth, & Uthurusamy, 1996), and hence, data mining (machine learning) paradigms. KDD implies the development of a process compounded by several stages that allow the conversion of low-level data into high-level knowledge, where the data mining is considered the core stage of such a process (Mitra, 2002). Nevertheless, it is important to be aware of the fact that the application of the data mining stage alone would be insufficient to undertake, with rigor and guarantees of success, a process of KDD (Fayyad & Simoudis, 1995). It is well known that KDD may offer excellent results when applied to marketing databases in general, as well as to the analysis of the behaviour of consumers in particular, though the development and application of specific KDD methodologies to marketing problems is still incipient (Liao & Chen, 2004). In this regard, we believe that the benefits provided by KDD should not only motivate its use in firms that are clearly interested in improving the efficiency of their MkMSS, thus their marketing decision making, but also in marketing academics. Specifically, in our opinion, the academics’ efforts must be focused on two main questions with regard to this: first, an intelligent, oriented and selective increase in the use of the KDD techniques, based on their properties for solving the marketing problem faced by the academics; and second, an active research to adapt generic KDD methodologies to the specific characteristics of the marketing problems to which they are going to be applied. In this sense, the main contribution of this paper focuses on the latter.

The paper has introduced a novel problem in marketing where KDD can help to generate easily understandable models for predictive induction. As far as we know, this is the first time that KDD has been applied to estimate structural models for consumer behaviour, which is usually done by traditional statistical tools. The proposed methodology develops three different stages of KDD: data collection, data mining, and knowledge interpretation. Data are collected from questionnaires based on a theoretically defined structural model filled in by consumers. The proposed data mining approach is based on the use of genetic algorithms to learn fuzzy rules. The problem provides a specific kind of uncertain data set that justifies the use of fuzzy logic. We perform multiobjective optimization (according to several quality criteria) to obtain diverse fuzzy models with different balances between accuracy and legibility. These alternative solutions can be analyzed by an expert from plots that collect the considered quality criteria. Finally, the solutions selected are interpreted by means of visual modelling that shows the system behaviour in a graphical and compact way, thus helping the expert to take decisions about the market analyzed according to the consumer’s opinions. Our KDD methodology has been appropriately applied to a real-world problem that analyzes consumer behaviour in interactive computer-mediated environments. As further work, we intent to extend our KDD approach to other areas in social science that use similar kinds of data to analyze human behaviour.