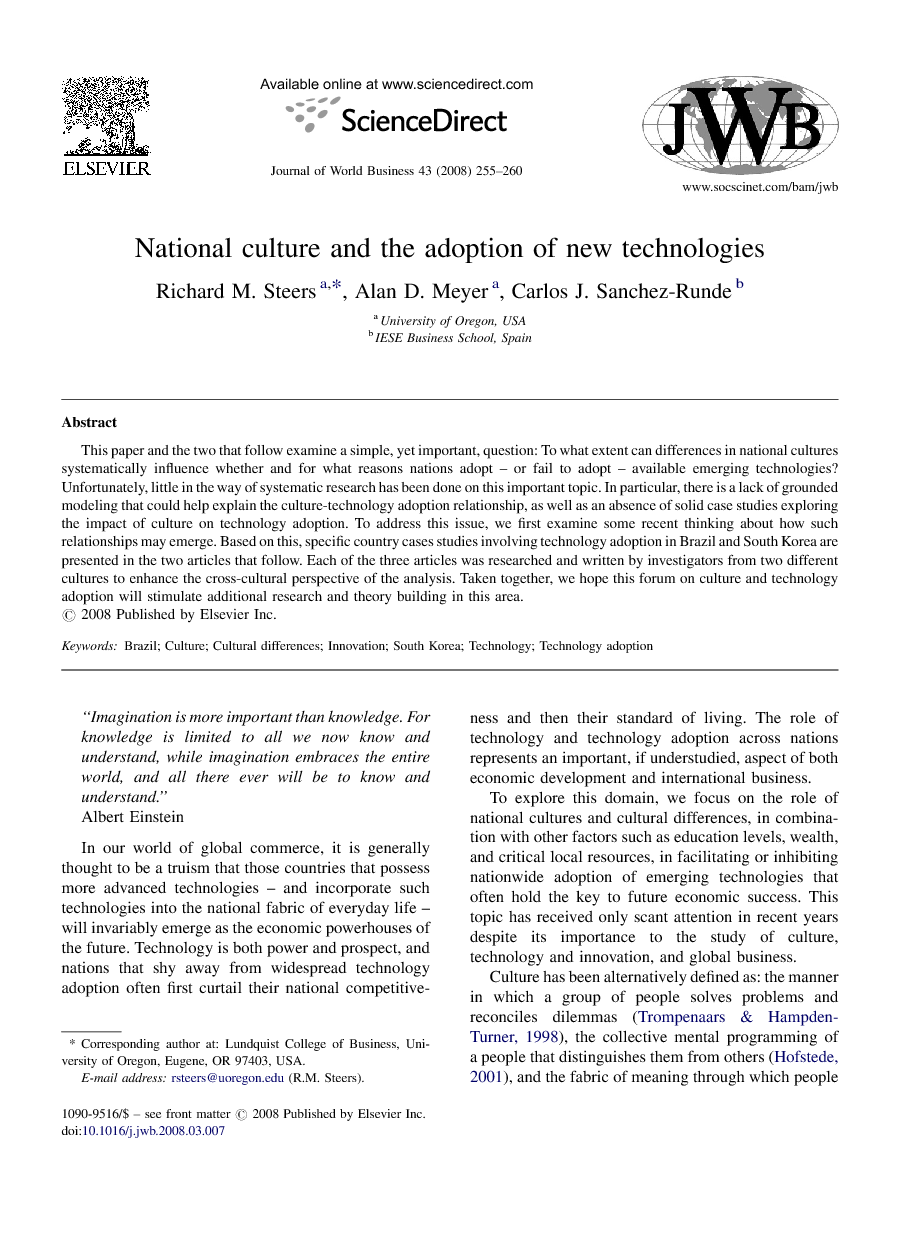 This paper and the two that follow examine a simple, yet important, question: To what extent can differences in national cultures systematically influence whether and for what reasons nations adopt – or fail to adopt – available emerging technologies? Unfortunately, little in the way of systematic research has been done on this important topic. In particular, there is a lack of grounded modeling that could help explain the culture-technology adoption relationship, as well as an absence of solid case studies exploring the impact of culture on technology adoption. To address this issue, we first examine some recent thinking about how such relationships may emerge. Based on this, specific country cases studies involving technology adoption in Brazil and South Korea are presented in the two articles that follow. Each of the three articles was researched and written by investigators from two different cultures to enhance the cross-cultural perspective of the analysis. Taken together, we hope this forum on culture and technology adoption will stimulate additional research and theory building in this area.

In our world of global commerce, it is generally thought to be a truism that those countries that possess more advanced technologies – and incorporate such technologies into the national fabric of everyday life – will invariably emerge as the economic powerhouses of the future. Technology is both power and prospect, and nations that shy away from widespread technology adoption often first curtail their national competitiveness and then their standard of living. The role of technology and technology adoption across nations represents an important, if understudied, aspect of both economic development and international business. To explore this domain, we focus on the role of national cultures and cultural differences, in combination with other factors such as education levels, wealth, and critical local resources, in facilitating or inhibiting nationwide adoption of emerging technologies that often hold the key to future economic success. This topic has received only scant attention in recent years despite its importance to the study of culture, technology and innovation, and global business. Culture has been alternatively defined as: the manner in which a group of people solves problems and reconciles dilemmas (Trompenaars & Hampden-Turner, 1998), the collective mental programming of a people that distinguishes them from others (Hofstede, 2001), and the fabric of meaning through which people interpret events around them (Geertz, 1973). All of these definitions share common roots. Culture is characterized by shared values and norms and mutually reinforcing patterns of behavior. Culture is learned and evolves over time, albeit slowly. Culture is also often invisible. Indeed, so inextricably is it interwoven into the fabric of a society that both its characteristics and the manifestations of these characteristics are often recognized least by the very people affected most. The question we pose is whether the characteristics of various cultures might systematically influence whether and for what reasons nations adopt – or fail to adopt – available emerging technologies. On the surface, the proposition that culture can influence patterns of technology adoption appears to have some merit. Bhagat, McDevitt, and McDevitt (in press) have noted that technology transfer across national boundaries is often influenced by cultural factors such as uncertainty avoidance, individualism–collectivism, and future-versus-past orientation. In addition, Schneider and Barsoux (2003) have observed that national leaders often serve as gatekeepers by sending clear signals to their followers concerning which industries or technologies are more highly valued and believed to be crucial to national security or economic prosperity. This practice can be seen in the changing agendas of successive U.S. presidents from a focus on environmental technologies to defense technologies. Hofstede (2001) has argued that countries with a low power distance (that is, countries that tend to be more egalitarian in nature) and with a high need for uncertainty avoidance (that is, a high need for certainty and predictability) tend to stress both technological development and technological adoption more than countries that stress more hierarchical social structures or more tolerance for ambiguity and uncertainty. Likewise, House, Hanges, Javidan, Dorfman, and Gupta (2004) argue that national efforts to acquire or develop advanced technologies are related to a country's future orientation, need to avoid uncertainty, and focus on institutional collectivism. As such, we might expect countries in North America and Eastern Asia to emphasize the pursuit of advanced technologies more strongly than countries in the Middle East or Sub-Saharan Africa. Despite these important observations, little in the way of systematic research has been done in this area. As a result, such observations must be considered tentative. Our particular concern in this regard is the lack of thorough modeling that may help explain the culture-technology adoption relationship – the “whats” as well as the “whys” – and the absence of systematic case studies of contemporary examples of culture's consequences upon technology adoption. To address these issues, we will first examine some recent thinking on how such relationships may come about. We then integrate this line of thought to the articles that follow, which examine two specific cases of technology adoption in two very different cultures, Brazil and South Korea. Taken together, we hope this forum on technology and culture will stimulate additional research – and theory building – in this arena.