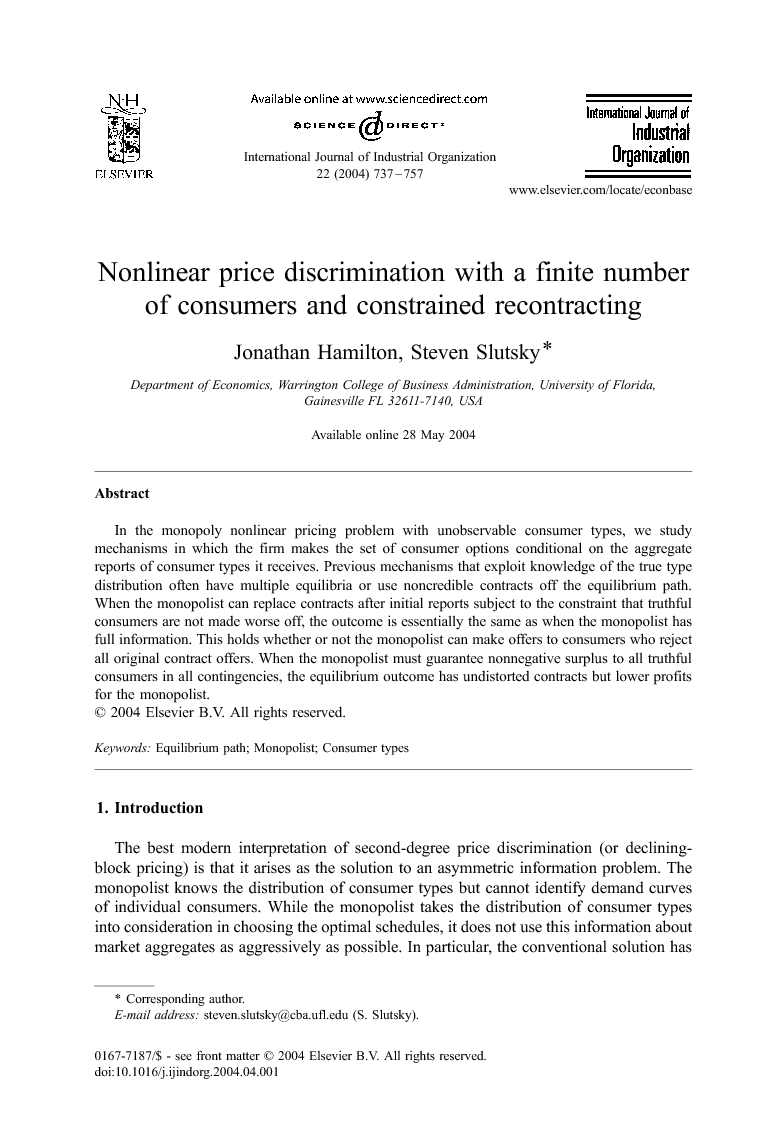 We have studied the effects of allowing a monopolist to condition nonlinear pricing contracts on the number of consumers who choose each of the menus of contracts. In addition, we require that all contract options, on and off the equilibrium path, be robust to revisions which benefit both the monopolist and truthful consumers. The monopolist can extract all consumer surplus when there are no restrictions on the contracts which it can offer on and off the equilibrium path, even when it can only make partial commitments. In effect, the monopolist is able to implement its most preferred outcome from the set of undistorted outcomes. This contrasts with Hamilton and Slutsky's (2003) result for the optimal income tax problem where the budget constraint prevents the social planner from implementing some undistorted outcomes. When the monopolist can only offer contract menus which do not violate the individual rationality constraints on and off the equilibrium path, the dominance-solvable outcome has undistorted contracts, but these contracts are less profitable for the monopolist than the conventional distorted ones. Unlike the simplest mechanisms where the monopolist exploits his knowledge of the precise distribution of consumer types, our mechanism does not have a multiplicity of Nash equilibria. Nor unlike mechanisms analogous to Piketty's generalized tax schedules do our mechanisms require the monopolist to commit to inferior outcomes off the equilibrium path. However, our mechanisms do require that the monopolist can offer contracts with negative surplus to truthful consumers off the equilibrium path. When we require that truthful consumers are never made worse off by participating in the mechanism, we find that the monopolist can only implement less profitable outcomes, albeit ones which are efficient. The Bagnoli–Salant–Swierzbinski mechanisms (1989, 1995) also extract all or almost all consumer surplus by changing offers over time after some consumers accept the early high-price offers. While these solutions are subgame-perfect Nash equilibria, they are not unique. In particular, in the infinite horizon game, if some consumers with high valuations only buy when price falls near marginal cost, the equilibrium price will drop to marginal cost quickly and the outcome is closer to Coase's prediction. In contrast, our solutions are unique because of the dominance solvability property. Other mechanisms (Crémer and McLean, 1985, Crémer and McLean, 1988 and Spiegel and Wilkie, 2000) allow a monopolist to avoid paying information rents to consumers by exploiting correlation between consumer types. There are several differences between these environments and ours, as well as in the results. First, since everyone knows the precise number of each consumer type in our model, the correlation is quite special (perfectly negative correlation when there is one consumer of each type, for example). This special correlation is allowed by Crémer–McLean but is not required. Second, the Crémer–McLean mechanism requires consumer risk neutrality, while our mechanism does not impose this. Since our mechanism does work with risk-neutral consumers, it would appear that the contract revision is the crucial feature that prevents implementation by a dominant strategy mechanism. Third, Crémer–McLean find dominant strategy mechanisms in some cases and Bayesian Nash mechanisms in others, while we construct dominance-solvable mechanisms (which are intermediate in restrictiveness). Fourth, Spiegel and Wilkie decompose the payment portion of their mechanism into two parts—one which depends on one's own reported type and one which depends on the vector of others' reports. Such a decomposition is not possible in our mechanism since the surplus received depends on the complete vector of reports. Thus, there appears to be no nesting relationship of our model with theirs. One problematic property of the Crémer–McLean mechanism is that the transfers paid by agents may need to be quite large. In our model where the aggregate distribution of types is common knowledge, the vectors of conditional probabilities of one consumer's type given another's type are sufficiently different that that does not occur. Thus, while our mechanism does not incorporate very large payments by consumers in any state of the world, a Crémer–McLean mechanism would not require very large payments either in the circumstances we consider.