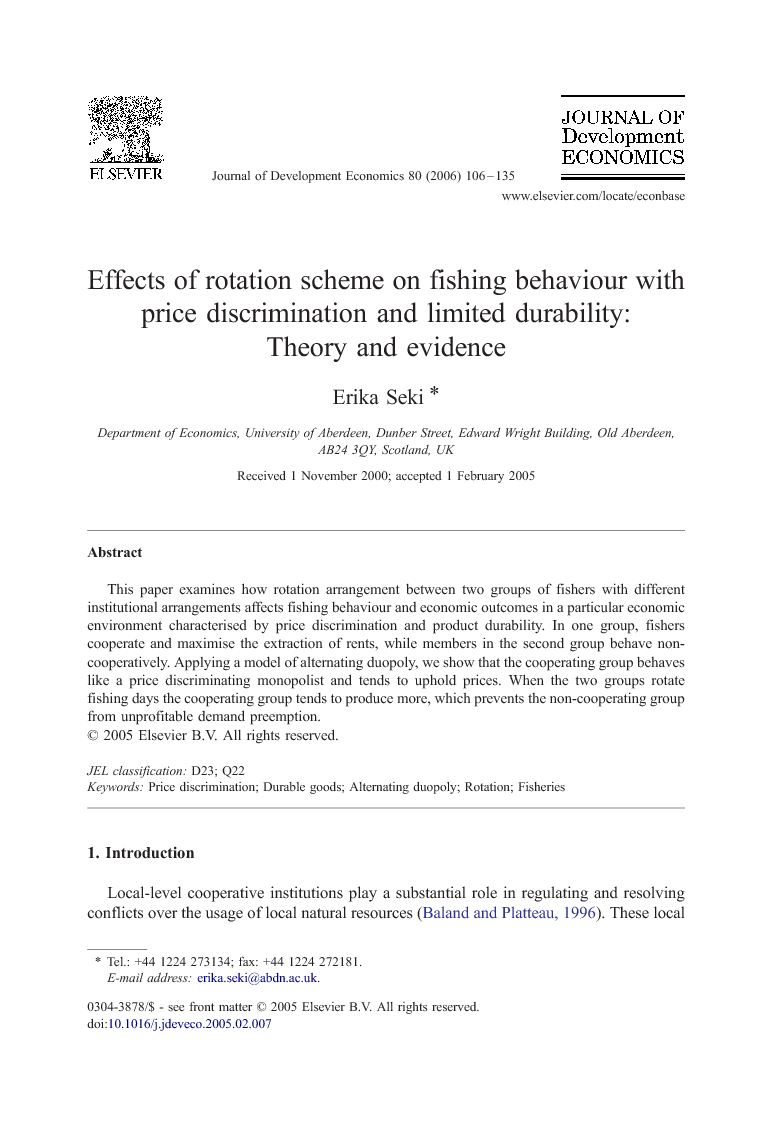 This paper examines how rotation arrangement between two groups of fishers with different institutional arrangements affects fishing behaviour and economic outcomes in a particular economic environment characterised by price discrimination and product durability. In one group, fishers cooperate and maximise the extraction of rents, while members in the second group behave non-cooperatively. Applying a model of alternating duopoly, we show that the cooperating group behaves like a price discriminating monopolist and tends to uphold prices. When the two groups rotate fishing days the cooperating group tends to produce more, which prevents the non-cooperating group from unprofitable demand preemption.

Local-level cooperative institutions play a substantial role in regulating and resolving conflicts over the usage of local natural resources (Baland and Platteau, 1996). These local informal institutions are of particular interest because a significant part of the livelihood of the poor in developing countries depends on local natural resources such as forestry, irrigation, grazing, and fisheries. There is also a growing recognition that local-level community organisations have the potential to manage natural resources and alleviate poverty more effectively than state and private control (Bowles and Gintins, 2002, Bardhan, 1993 and Ostrom, 1990). Rotation is one of the institutional arrangements commonly applied to allocate irrigation water, firewood and other forests products, and access to fishing spots.1 While it is fairly obvious that these rotation arrangements promote equity and resolve conflicts among the people concerned, its effects on economic outcomes, particularly how it affects individual usage of resources and overall efficiency, are ambiguous. Most empirical studies on rotational arrangements in fishing communities seem to endorse the general view that the effectiveness of rotation arrangements is limited: it avoids conflicts and ensures equitable allocation of resources among the users but it does not address fundamental issue of internalisation of negative externalities, that is, control of individual fishing efforts.2 Evidences often suggest that the advent of commercialisation and technological progress can threaten such schemes (Alexander, 1977 and Baland and Platteau, 1996, pp. 199–210; Berkes, 1992 and Schlager, 1994). Such a pessimistic view about the effectiveness of rotation arrangements seems to be at odds with other empirical observations of long-lived and sustained practice of rotation among resource users. Ostrom (1990), for instance, reveals on the basis of in-depth field observations that rotation of irrigation water in Sri Lankan village has induced cooperative behaviour among resource users with differing interests. The documentation of self-management institutions among local fishers in Japan also suggest that rotational fishing arrangements can also be associated with the effective control of fish catches (Zengryoren, 1992). But why in some cases do rotation arrangements contribute to internalisation of negative externalities, while in other cases not? Particularly, why do some rotation arrangements manage to induce cooperative outcomes while inhibiting competitive pressure to behave non-cooperatively? This paper aims to analyse how a rotation scheme influences individual behaviour and affects economic outcome in an actual field setting. More specifically, using unique data on a rotation arrangement between two groups of fishers in Japan, we examine formally how rotation arrangement induces strategic interactions between the groups, and how this then affects the individual fishing behaviour and economic outcomes in a particular market environment. These two groups harvest the same type of shrimp and sell them at the same market. Except for a few months in which only the first group (Group A) operates, the two groups adopt a rotation scheme by fishing on alternating days. These two groups have different institutional setups: the group A fishers pool income and fish cooperatively, while in the other group (Group B), the members do not pool income and fish non-cooperatively. The shrimp is sold daily through an auction procedure in which buyers are price discriminated. The differences in the way the two groups are organised, plus the fact that the first group is also observed operating alone, provide us with a unique opportunity to examine how rotation combined with increasing competitive pressures affects outcomes. In order to obtain theoretical predictions concerning the effects of rotation arrangement on fishing behaviour, we build a game theoretical model of alternating duopoly inspired by Maskin and Tirole (1988a). Assuming Markov strategies, our model shows that the cooperating Group A approximated as a price discriminating monopolist underproduces in order to prevent preemption of future demand, while Group B, composed of non-cooperative fishers, would overproduce due to intra-group competition. However, when the two groups rotate fishing days, theory suggests that an interesting strategic interdependence arises: the cooperating group should produce more so as to prevent the non-cooperating group from unprofitable demand preemption. Consequently, under the rotation arrangement, Group B's tendency to dissipate rent is reduced, while Group A's tendency to uphold price inefficiently is mitigated. Adopting Slade, 1992 and Slade, 1995 approach, these theoretical implications are then tested against empirical data. This paper is organised as follows. In Section 2, our field observations are briefly described. Section 3 presents the baseline case of a price discriminating monopolist. We show, in congruence with standard theory, that the equilibrium effort level is Pareto optimal, if members of the group as a whole behave like a price discriminating monopolist. Section 4 examines oligopolistic competition with price discrimination and with storability of product. We find that the non-cooperating group tends to dissipate rent by overproducing. In Section 5, we present a final version of the model with all the elements in place, i.e. alternating arrangement between the two groups, possibility of price discrimination and partial durability of shrimp. Section 6 sets out the empirical model, which is then applied to estimate and test the theoretical implications using our data on Japanese fishers. Section 7 concludes.

This paper investigates how rotation arrangement may induce strategic interactions between two groups of fishermen, which then affects the individual fishing behaviour and economic outcomes in a particular market environment, characterised by price discrimination and product durability. In order to obtain theoretical predictions concerning the effects of the rotation arrangement on fishing behaviour, we build a game theoretical model of alternating duopoly inspired by Maskin and Tirole (1988a). Our theoretical model suggests that the rotation system induces strategic interactions between the groups. Group A, with a collective arrangement, behaves like a price discriminating monopolist and tends to uphold prices inefficiently in order to discourage consumers from preempting demand. Group B composed of non-cooperative fishermen tends to overproduce, given sufficiently elastic demand. The model reveals that the rotation scheme where fishing days are alternated has some interesting theoretical predictions: it reduces Group B's tendency to dissipate rent on the one hand, and mitigates Group A's tendency to uphold price inefficiently on the other. The model is estimated and tested using data of Japanese fishermen. The evidence suggests that behaviour of the two groups is consistent with the predictions of the alternating duopoly model. Some remarks on more general insights gained from this study are in order. The most noteworthy is that we have shown that rotation may induce strategic interdependencies through which cooperative outcomes are realised through non-cooperative individual action. Unlike in the case of cooperation sustained by reputation effects, the cooperative outcomes discussed in the paper are achieved without relying on repeated interactions. While most of field studies of rotation emphasise that the effects of rotation arrangements are limited to promoting equity, the present paper shows that it has potential to enhance efficiency. In particular, this study demonstrates that, in certain circumstances, there need not be an efficiency–equity trade-off. Further, it shows the way in which cooperation in one group can affect non-cooperative behaviour in the other via particular institutional arrangements. The social capital literature has emphasised the difficulty of maintaining cooperative norms in a competitive economic environment, particularly where there are non-cooperative actors (Portes and Landolt, 2000). We have demonstrated that a rotation scheme can give rise to strategic interactions between cooperative and non-cooperative groups through demand interlinkages, which produce positive spill-overs. That is, it makes the non-cooperative actors refrain from unprofitable demand preemption and behave seemingly cooperatively. The conditions under which the positive ‘contagion’ of the cooperative outcomes demonstrated in this paper occurs is obviously one area for further research.10 Our paper also provides a specific empirical example of how the community enforcement of social norms might emerge among non-cooperative agents as suggested by Kandori (1992) and Okuno-Fujiwara and Postlewaite (1995). These authors do not specify explicitly how such norms are actually transmitted and influence individual incentives. Our analysis shows that a specific institutional arrangement (i.e. rotation system) may give rise to a particular information structure and strategic interactions between the groups conducive for producing cooperative ontcomes. In developing countries, the continuous encroachment of competitive forces, population pressure and the gradual erosion of tradition co-operative norms would appear to threaten the management of common resources vital for so many. Our analysis demonstrates that such dismal outcomes are by no means pre-determined and that sustainable self-governance institutional arrangements are possible.