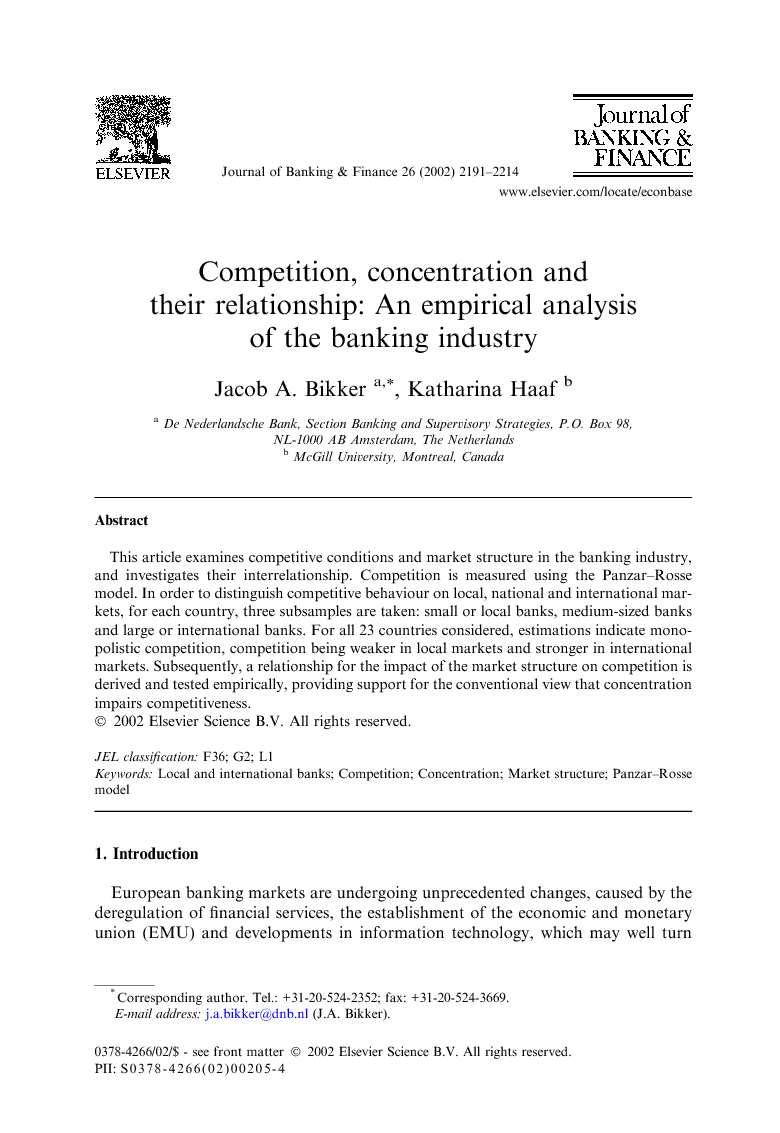 This article examines competitive conditions and market structure in the banking industry, and investigates their interrelationship. Competition is measured using the Panzar–Rosse model. In order to distinguish competitive behaviour on local, national and international markets, for each country, three subsamples are taken: small or local banks, medium-sized banks and large or international banks. For all 23 countries considered, estimations indicate monopolistic competition, competition being weaker in local markets and stronger in international markets. Subsequently, a relationship for the impact of the market structure on competition is derived and tested empirically, providing support for the conventional view that concentration impairs competitiveness.

European banking markets are undergoing unprecedented changes, caused by the deregulation of financial services, the establishment of the economic and monetary union (EMU) and developments in information technology, which may well turn out to be dramatic. Many of these changes will have vast implications for competition and concentration in the banking and financial sectors. One of the consequences is already apparent in the recent wave of mergers in the European banking industry. This process of concentration may affect competition, in particular on local markets for retail banking services. Questions may arise such as: Should concentration be slowed down? or Are additional measures needed to ensure sufficient competition in local retail markets? Besides, increased concentration and the size of the new global players may cause concerns about financial stability. In order to judge the implications of these developments, one has to examine the banking industry’s current market structure, to determine the degree of competition, and to investigate the impact the consolidation is likely to have on the market structure and the behaviour of banks. In recent years, however, relatively few empirical studies have examined competition and concentration in European banking markets. This article seeks to measure the degree of competition in the European banking markets, and to investigate the impact of concentration on competition. Moreover, it attempts to compare the situation in Europe with that in the US and other countries. The literature on the measurement of competition may be divided into two mainstreams, called the structural and the non-structural approach.1 The structural approach to model competition includes the structure–conduct–performance (SCP) paradigm and the efficiency hypothesis, as well as a number of formal approaches with roots in industrial organisation theory. The SCP paradigm investigates whether a highly concentrated market causes collusive behaviour among larger banks resulting in superior market performance; whereas the efficiency hypothesis tests whether it is the efficiency of larger banks that makes for enhanced performance. In reaction to the theoretical and empirical deficiencies of the structural models, non-structural models of competitive behaviour have been developed namely the Iwata model, the Bresnahan model, and the Panzar and Rosse (P–R) model. These New Empirical Industrial Organisation approaches measure competition and emphasise the analysis of the competitive conduct of banks without using explicit information about the structure of the market. In this article we will use one of these non-structural models, the P–R model, to assess the degree of competition in a large number of countries. One of the structural approaches, the SCP paradigm, provides a theoretical relationship between market structure (concentration) and conduct (competition) which, in the empirical banking literature, is ignored. This article fills in this gap by using the P–R model’s measure of competition to test this relationship empirically. Ideally, an evaluation of competitive conditions and the degree of concentration in the banking industry should begin by rigorously defining the market under consideration. The relevant market consists of all suppliers of a particular banking service, including actual or potential competitors, and it has a product dimension and a geographical dimension. The product definition of a market is based on the equality of the products as regards their ability to fulfil specific consumer wants. The geographical boundaries of a market are determined by actual and potential contacts between actual and potential market participants. These boundaries depend on the products involved: for retail banking, the local dimension of a market is relevant while the regional or international dimension is relevant for corporate banking. The desirability to define product and (smaller-scale) geographical markets makes it harder to apply competition and concentration models to the banking industry, especially given the shortage in (European) data with respect to specific banking products or local regions. This article attempts to solve this problem to some extent by applying the P–R model to samples of banks of various sizes, under the assumption that small banks operate mostly at a local scale and that large banks compete more than other banks at the international level, while medium-sized banks occupy an intermediate position. Furthermore, retail banking is assumed to be concentrated mostly in small banks while corporate banking occurs more at large banks. Banking behaviour in geographical markets of various sizes is observed indirectly, through the data of individual banks used in the P–R model. Of course, this is only a first step in the right direction, but we do acquire information about the effect of (the size of) geographical markets on competition. The plan of this article is as follows. Section 2 introduces and explains the P–R approach. Section 3 applies this model to banks in 23 industrialised countries. For each country, four samples are taken: small, medium-sized and large banks and, finally, all banks. This section also displays various concentration indices and applies them to the (same) 23 industrialised countries. Finally, the relationship between competition and concentration is tested empirically. The ultimate section summarises and draws conclusions.

The ongoing dramatic structural changes in the banking industry, particularly in Europe, may affect competition, especially on local markets and for bank’s retail services. This article sought to assess competitive conditions and concentration in the banking markets of as many as 23 industrialised countries inside and outside Europe over approximately 10 years. In addition, it investigated the interaction between competition and concentration. The Panzar–Rosse approach has been applied to obtain a measure of competitive conditions in to 23 countries over a time span of more than 10 years. The resulting H statistic provides strong evidence that the banking markets in the industrial world are characterised by monopolistic competition, but perfect competition cannot be ruled out in some cases. We have attempted to take account of the geographical and even the product dimension of banking operations by defining three sub-markets in terms of bank sizes for each country and have estimated their degree of competition. Competition is stronger among large banks – operating predominantly in international markets – and weaker among small banks – operating mainly in local markets – while medium-sized banks take an intermediate position. In some countries, perfect competition has been found among large banks. For a number of countries, estimates of the H statistic over time indicate a significant increase in competition. Competition seems to be somewhat stronger in Europe than in countries like the US, Canada and Japan. Thanks to the large sample and the pooled regression approach, our results are fairly robust. Generally speaking, our findings are in keeping with comparable studies in the literature, which also point to monopolistic competition in most countries. Concentration in the banking markets of 23 industrialised countries was measured using various k-bank concentration ratios and the Herfindahl index. Empirical studies concerning the impact of market structure on banks’ conduct are rare. In order to investigate this relationship, the estimated H-values indicating competition are used as proxies of conduct and are related both to the concentration indices considered and to the absolute number of banks operating in these markets, acting together as a proxy of the market structure. The impact of both market structure measures on competition appears to be significant, most markedly so when the k-bank concentration indices are used. The latter confirms the observation that a few large (cartel) banks can restrict competition and that a multitude of fringe competitors is unable to engender competition.