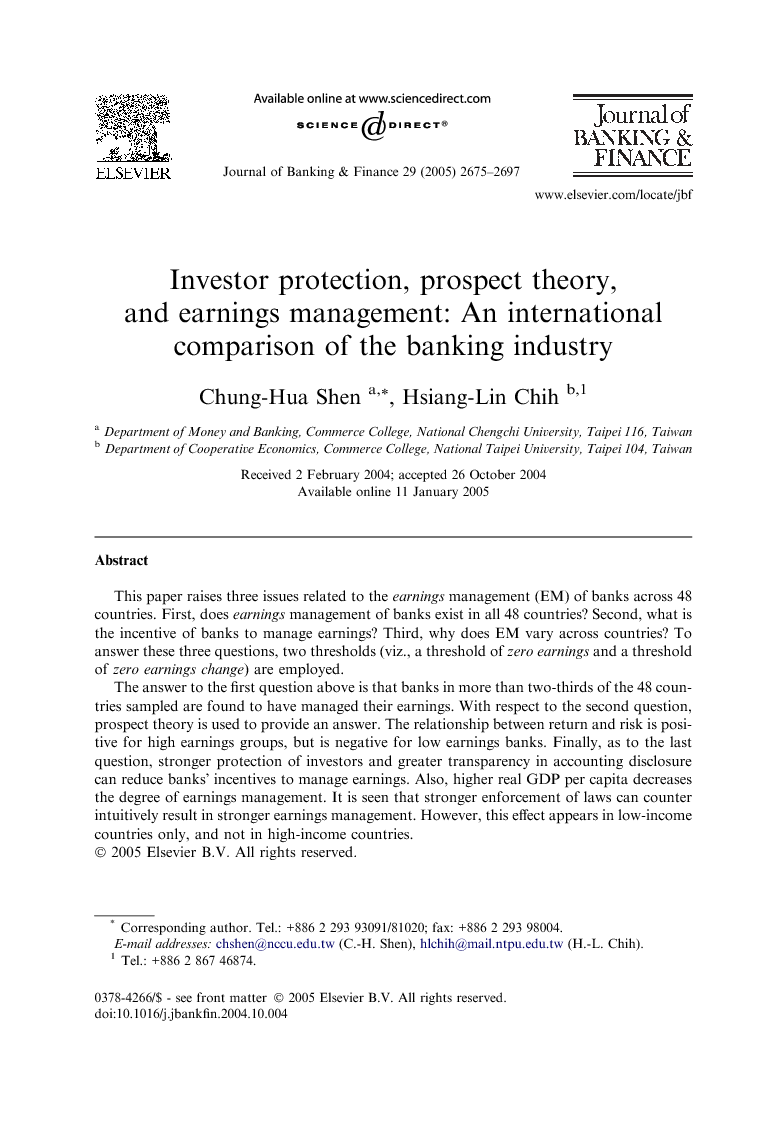 This paper raises three issues related to the earnings management (EM) of banks across 48 countries. First, does earnings management of banks exist in all 48 countries? Second, what is the incentive of banks to manage earnings? Third, why does EM vary across countries? To answer these three questions, two thresholds (viz., a threshold of zero earnings and a threshold of zero earnings change) are employed. The answer to the first question above is that banks in more than two-thirds of the 48 countries sampled are found to have managed their earnings. With respect to the second question, prospect theory is used to provide an answer. The relationship between return and risk is positive for high earnings groups, but is negative for low earnings banks. Finally, as to the last question, stronger protection of investors and greater transparency in accounting disclosure can reduce banks’ incentives to manage earnings. Also, higher real GDP per capita decreases the degree of earnings management. It is seen that stronger enforcement of laws can counter intuitively result in stronger earnings management. However, this effect appears in low-income countries only, and not in high-income countries.

This paper finds that the distributions of banks’ net income are half-normally distributed for more than two-thirds of the countries in our sample, suggesting the possibility of earnings management. We use three measures to assess the null of no earnings management. The three measures were originally developed for non-financial industries. Our results show that bank earnings management is common and indeed exists for nearly all of the sample countries regardless of the measures. Conflicting evidence, however, also exists. For example, using conventional measures, US banks show no sign of earnings management, yet earnings management seems to exist with respect to the distribution of banks’ net income. Further research is needed. Our results also demonstrate wide variation in the extent of the earnings management across countries. It appears to be strongly driven by the elements of prospect theory. Furthermore, we find that in order to weaken banks’ incentives to manage earnings and thus improve the reliability of financial reports, stringent accounting disclosure requirements appear to be more effective than developing strong antidirector rights. But, it is striking that stricter law enforcement contrarily results in more earnings management, since managers feel the need to avoid earnings decreases; thus possibly lowering the quality of financial reports of the banking industry.