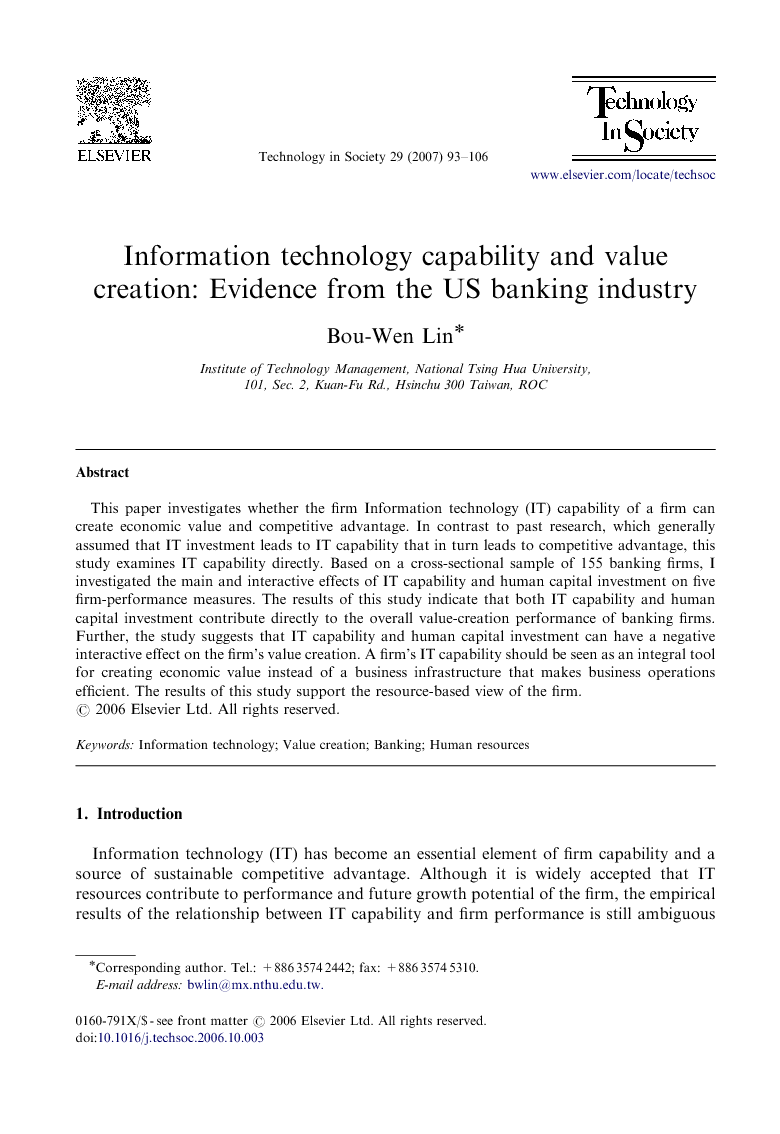 Information technology (IT) has become an essential element of firm capability and a source of sustainable competitive advantage. Although it is widely accepted that IT resources contribute to performance and future growth potential of the firm, the empirical results of the relationship between IT capability and firm performance is still ambiguous [1] and [2]. The unavailability of publicly available data, the accelerated pace of IT innovation, the possible interactive effects between IT and human resources, and the intangible nature of IT capability are among the obstacles that hinder an understanding of whether and how IT can create value for a firm. Another explanation for the inconclusiveness in the literature is that most studies dealing with the impact of IT on firm performance fail to explicitly distinguish (1) IT investments from IT capability, and (2) value creation from firm profitability. This paper addresses those issues and investigates whether IT capability of a firm can create economic value and/or enhance profitability. Researchers and professionals often assume that investment in IT will lead to gains in both profits and productivity, which in turn creates value for the firm. However, this does not seem to be a straightforward line of reasoning. Many empirical studies that examined the relationship between IT investments and various measures of performance produced mixed results [3]. Investments in IT do not necessarily yield results as anticipated. Before we can further our understanding of IT value, we must clarify some intermingled concepts commonly used in the IT value literature. First, the concepts of IT investments in IT capability can be divided into two different types that result from two streams of studies and must be distinguished. The former is understood simply as the amount of money a firm invests on IT. However, large IT expenditures by a firm may reflect its inefficient IT operations or poor planning rather than a high level of IT innovation or capability [4]. Firms that invest heavily on IT without developing a corresponding IT capability will find themselves at a comparative disadvantage. As to a firm's IT capability, the definition by Bharadwaj is useful: “its ability to mobilize and deploy IT-based resources in combination or co-present with other resources and capabilities” [5, p. 170]. Firms with superior IT capability enjoy superior financial performance by bolstering their revenues, increasing productivity, and/or decreasing costs. Second, efficiency performance measures (such as productivity, returns on equity, and Tobin's Q) differ from effectiveness performance measures (such as economic value-added, market value-added, and IT- enabled strategic options). Much of the earlier research examined the correlations between IT expenditures and measures of profitability. Brynjolfsson and Hitt [6] suggest that the value of IT should be measured by intangible dimensions such as improvements in quality, customer service, and new product development. A key issue facing IT researchers and practitioners is the difficulty of realizing the full potential of IT. Bakos and Kemerer [7] identify three different types of IT values: (1) normative value (based on expected values), (2) realist value (based on observed outcomes) and (3) perceived value (based on subjective user evaluations). Research results dealing with different types of IT values should not be confused.

The results of this study have implications, both theoretical and practical, for the field of strategic IT management. First, the findings help to substantiate the view that a firm's IT capability is crucial for its competitive advantage. Specifically, the evidence showed that IT capability contributes to the total-amount and effectiveness measures of value-added over a 5-year period. Lawler [18] contends that the growth of knowledge and IT has increased performance pressures on organizations. Li and Collier [41] also find that IT directly affects the quality and financial performance of hospitals. However, Tam [42] uses data from four newly industrialized economies to develop a market-valuation model based on Tobin's Q, and the results suggest that IT investments are not correlated with return to shareholders. This study distinguishes IT investments from IT capability. A firm that invests heavily in IT may be reflecting its ineffectiveness in IT management. By adopting the IT 500 ranking provided by Information Week, a professional IT magazine, it may be possible to reconcile many of the inconsistent empirical findings in the IT management literature (such as Bharadwaj et al. [1]). Based on my findings, I believe that IT capability forms the basis of competition for firms in information-intensive industries like banking, retailing, and high-tech manufacturing. Second, the results also suggest that human capital is a valuable form of intellectual assets that contribute positively to firm performance over the long term. These findings are consistent with several recent studies published in the literature on human capital. Several other studies have also reported positive associations between human resource efforts and firm performance [22]. In this study, I use the ratio of labour and related expense divided by the number of employees as a proxy for human capital. The results that are consistent with the literature strengthen the usefulness of the proxy of human capital. Third, the findings partially support the view that IT capability and human capital investment can jointly affect firm performance, and the interaction effect is negative. The results parallel with those of Dewan and Min [9]—that IT increasingly displaces other inputs in the production of goods and services. There might be a trade-off between the two types of intellectual capital, IT capability and human capital. Furthermore, after considering the effects of IT capability and human capital investment, the effect of firm size on shareholder value (measured by Tobin's Q and market-to-book value) becomes significantly negative. Therefore, I surmise that the economy of scale observed in the banking industry can largely reflect that larger banking firms are in a better position to tap into advanced IT and high-quality human capital. In addition to traditional explanations such as the effect of risk pooling and sharing of fixed costs, the results shed new light on how large banking firms can enjoy competitive advantage. This study has some important managerial implications. The results confirm the resource-based view that firms compete on the basis of distinctive core competencies and resources that are valuable, rare, difficult to imitate, and non-substitutable by other resources. IT capability and human capital are the two most important strategic resources for firms in information-intensive industries. Managers must resort to internal intellectual capital for competitive advantage in the face of deregulation, escalating customer expectations, and global competition. IT investments might fluctuate due to environmental forces and the firm's profitability. Human capital investment is a relatively stable form of value added to an organization's capability [43]. IT capability and human capital are powerful strategic weapons, which managers should not overlook although it might take a long time to harvest such investments. In order to create premium value in knowledge-intensive industries, firms should invest continually in both technology and human resources. Therefore, a long-term perspective is required for corporate IT and human capital strategies. Managers also need to consider the potential trade-offs between the two important resources. My research complements the existing work on IT capability (investments) and human capital. To the best of my knowledge, it is one of the first few studies that attempts to link the two streams of research. The results point to an interesting direction for research on how to integrate IT and human capital into a successful corporate competitive strategy.