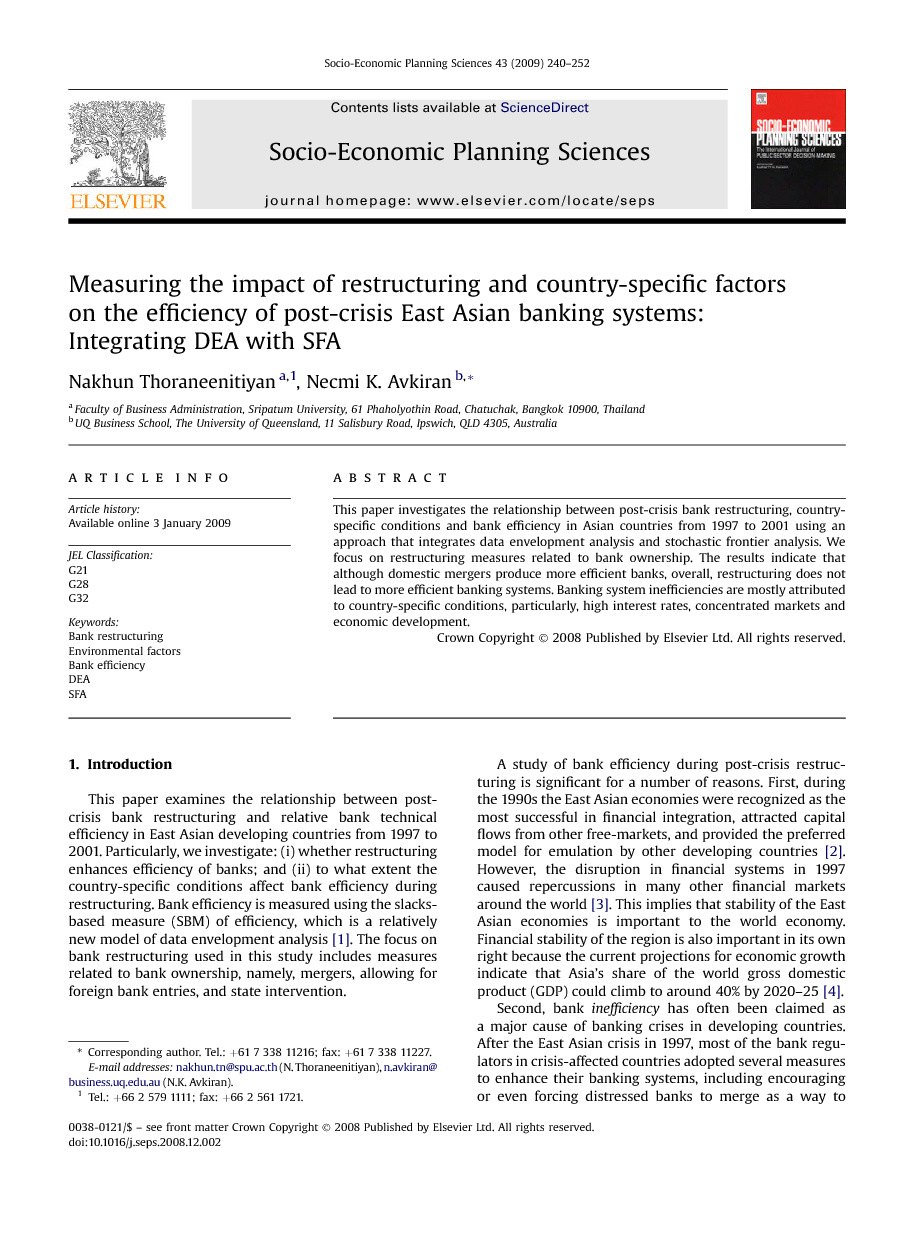 This paper examines the relationship between post-crisis bank restructuring and relative bank technical efficiency in East Asian developing countries from 1997 to 2001. Particularly, we investigate: (i) whether restructuring enhances efficiency of banks; and (ii) to what extent the country-specific conditions affect bank efficiency during restructuring. Bank efficiency is measured using the slacks-based measure (SBM) of efficiency, which is a relatively new model of data envelopment analysis [1]. The focus on bank restructuring used in this study includes measures related to bank ownership, namely, mergers, allowing for foreign bank entries, and state intervention. A study of bank efficiency during post-crisis restructuring is significant for a number of reasons. First, during the 1990s the East Asian economies were recognized as the most successful in financial integration, attracted capital flows from other free-markets, and provided the preferred model for emulation by other developing countries [2]. However, the disruption in financial systems in 1997 caused repercussions in many other financial markets around the world [3]. This implies that stability of the East Asian economies is important to the world economy. Financial stability of the region is also important in its own right because the current projections for economic growth indicate that Asia's share of the world gross domestic product (GDP) could climb to around 40% by 2020–25 [4]. Second, bank inefficiency has often been claimed as a major cause of banking crises in developing countries. After the East Asian crisis in 1997, most of the bank regulators in crisis-affected countries adopted several measures to enhance their banking systems, including encouraging or even forcing distressed banks to merge as a way to reduce failure risk and inefficiency. Yet, the effectiveness of different policies at the individual bank level following a crisis is rarely explored for these countries (an exception is [5]). Allowing for full foreign ownership of commercial banks was used as a means to attract foreign investors and their technologies to reduce operating costs [6]. Although these conventional restructuring measures are expected to improve efficiency in a banking system, research usually indicates no such improvement from mergers [7], [8] and [9]. For example, mixed results have been found regarding the relationship between foreign bank entries and bank efficiency [10] and [11]. Third, the current study sheds light on the relationship among bank mergers, foreign bank entries, state intervention, and bank efficiency in developing country. For instance, research based on industrialized countries usually indicates no improvement from bank mergers. However, little empirical research exists on developing countries. Hence, the positive association between bank mergers and efficiency in the current study strengthens the assumption of efficiency gains from bank mergers in developing countries. The negative association between foreign bank entry and bank efficiency brings a new observation to bank literature in developing countries. Finally, the current study also contributes to investigation of environmental influences on efficiency estimates. In cross-country bank efficiency literature, research that accounts for the influence of environmental factors is limited to studies based on Europe (e.g., [12] and [13]). Our results highlight the importance of country-specific conditions that play a significant role in bank efficiency measurement in developing countries. The paper is organized as follows. In Section 2, we provide a review of bank efficiency in Asian countries around the 1997 banking crisis. Section 3 discusses bank restructuring measures implemented following the Asian banking crisis. Section 4 outlines data and the multiple-stage analysis used to account for environmental effects. Section 5 presents an analysis of the results, and Section 6 concludes.

This study shows how an integrated DEA and SFA approach can account for environmental effects and statistical noise to measure relationships between bank restructuring and bank technical efficiency in Asian developing countries during the period of 1997–2001. Restructuring in this paper focuses on the measures related to bank ownership, namely, mergers, allowing for foreign bank entries, and state intervention. The key contribution of this paper is an empirical analysis of the impact of post-crisis restructuring measures and country-specific factors on bank efficiency in the East Asian developing countries. More specifically, the study is important because (i) the stability of East Asian economies who hold a major proportion of the world GDP should be better understood, (ii) while bank inefficiency is often indicated as a principal source of banking crises in developing countries, effectiveness of various policies is rarely explored, (iii) little empirical research can be found on the relationship among bank mergers, foreign bank entries, state intervention, and bank efficiency in developing countries, and (iv) cross-country bank efficiency literature that investigates the influence of environmental factors is limited to studies on Europe. Although we are not investigating causes of the Asian financial crisis, this paper reveals that macro-economic factors play a greater role than restructuring in helping problem banks. The methodology starts with non-oriented SBM stage 1, which is used to assess technical efficiency of banks without considering environmental effects, followed by SFA regressions in stage 2 measuring the impact of the environment on bank inefficiency. Finally, in stage 3, SBM is repeated with adjusted data. Our main results show that bank restructuring does not necessarily enhance bank efficiency. That is, restructured banks do not appear to be more efficient than non-restructured banks once the impact of the environment is removed. While low efficiencies observed in stage 1 are substantially greater in stage 3, the mean efficiency does not improve over time as restructuring unfolds. In general, domestic mergers appear to have a positive impact on bank efficiency whereas foreign bank entries during the crisis period appear to be performing worse than domestic banks. This suggests that locally-owned banks are more likely to have the home field advantage although some regulations may have been relaxed for foreign banks. In line with the literature, banks under state intervention were found to be less efficient than non-intervened banks. Our results also reveal that the effects of restructuring on bank efficiency are relatively low compared to the influences of macro-economic conditions. Therefore, to deal with future potential crises, local and international bank regulators should put more emphasis on macro-economic policies. Specifically, high interest rates and concentrated markets appear to be unfavorable influences on bank efficiency. The ostensibly counter-intuitive positive relationship between the overall level of economic development and inefficiency may be a reflection of highly regulated Asian banking systems dominated by a small number of banks. Therefore, by inference, high economic development in such countries does not necessarily lead to more competition and less inefficiency as found, say, in the European markets. Similarly, a bank that operates in a country which is a signatory to IMF support would have a more disciplined environment and may enjoy greater efficiency. The key limitations of this paper consist of unavailable data for some countries and complexity of macro-economic policies. For example, bank privatizations that followed state intervention were excluded as they were incomplete in many countries. A study focusing on developing countries in other regions can be a valuable extension of this paper. We also acknowledge a shortcoming of multi-stage DEA/SFA, namely, possible serial correlation among the estimated coefficients [59]. However, the limited sample size hampers us to conduct the bootstrap procedures introduced by Simar and Wilson [60]. A qualitative investigation of the reasons as to why restructuring does not appear to deliver more efficient banks would also be a worthwhile addition to banking literature.