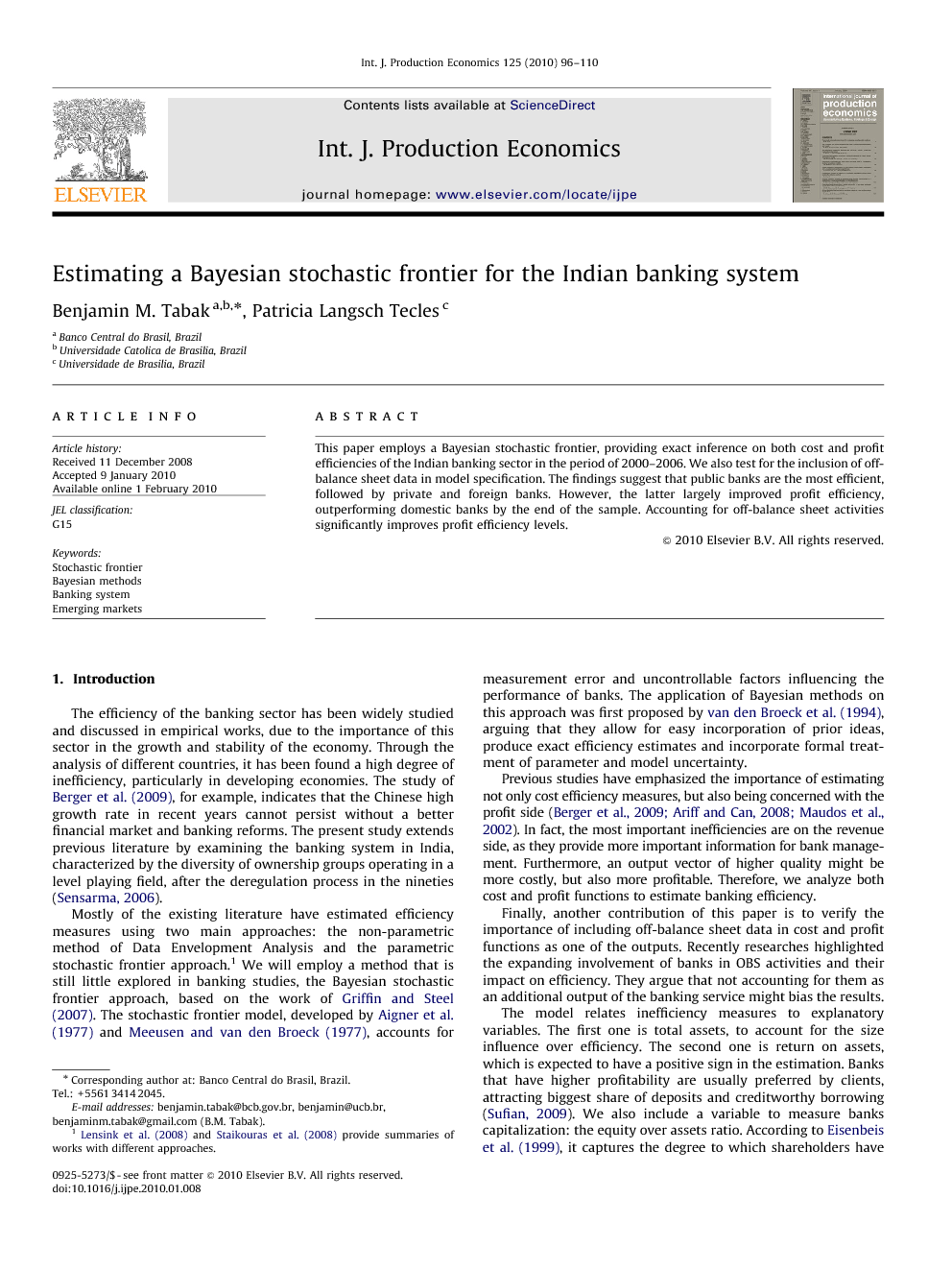 This paper employs a Bayesian stochastic frontier, providing exact inference on both cost and profit efficiencies of the Indian banking sector in the period of 2000–2006. We also test for the inclusion of off-balance sheet data in model specification. The findings suggest that public banks are the most efficient, followed by private and foreign banks. However, the latter largely improved profit efficiency, outperforming domestic banks by the end of the sample. Accounting for off-balance sheet activities significantly improves profit efficiency levels.

The efficiency of the banking sector has been widely studied and discussed in empirical works, due to the importance of this sector in the growth and stability of the economy. Through the analysis of different countries, it has been found a high degree of inefficiency, particularly in developing economies. The study of Berger et al. (2009), for example, indicates that the Chinese high growth rate in recent years cannot persist without a better financial market and banking reforms. The present study extends previous literature by examining the banking system in India, characterized by the diversity of ownership groups operating in a level playing field, after the deregulation process in the nineties (Sensarma, 2006). Mostly of the existing literature have estimated efficiency measures using two main approaches: the non-parametric method of Data Envelopment Analysis and the parametric stochastic frontier approach.1 We will employ a method that is still little explored in banking studies, the Bayesian stochastic frontier approach, based on the work of Griffin and Steel (2007). The stochastic frontier model, developed by Aigner et al. (1977) and Meeusen and van den Broeck (1977), accounts for measurement error and uncontrollable factors influencing the performance of banks. The application of Bayesian methods on this approach was first proposed by van den Broeck et al. (1994), arguing that they allow for easy incorporation of prior ideas, produce exact efficiency estimates and incorporate formal treatment of parameter and model uncertainty. Previous studies have emphasized the importance of estimating not only cost efficiency measures, but also being concerned with the profit side (Berger et al., 2009, Ariff and Can, 2008 and Maudos et al., 2002). In fact, the most important inefficiencies are on the revenue side, as they provide more important information for bank management. Furthermore, an output vector of higher quality might be more costly, but also more profitable. Therefore, we analyze both cost and profit functions to estimate banking efficiency. Finally, another contribution of this paper is to verify the importance of including off-balance sheet data in cost and profit functions as one of the outputs. Recently researches highlighted the expanding involvement of banks in OBS activities and their impact on efficiency. They argue that not accounting for them as an additional output of the banking service might bias the results. The model relates inefficiency measures to explanatory variables. The first one is total assets, to account for the size influence over efficiency. The second one is return on assets, which is expected to have a positive sign in the estimation. Banks that have higher profitability are usually preferred by clients, attracting biggest share of deposits and creditworthy borrowing (Sufian, 2009). We also include a variable to measure banks capitalization: the equity over assets ratio. According to Eisenbeis et al. (1999), it captures the degree to which shareholders have their own capital at risk in the institution, which may be reflected on their incentives to monitor management and assure that the institution operates efficiently. In agree with the moral hazard theory, the hypothesis is that the higher the equity ratio, the more efficient the institution is likely to be. However, as argued by Berger and Mester (1997), capital used to finance loans may also increase costs, as raising equity usually involves higher costs than raising deposits. We also include ownership covariates in the inefficiency estimation. According to Das and Ghosh (2006), the reasons why different ownership structures of banks may produce different efficiency levels have support on the public choice theory and the principal agent framework. The argument is that when management is little constrained by capital market discipline, managers pursue their own interests, and are given fewer incentives to be efficient. For Lensink et al. (2008), domestic banks have informational advantages relative to foreign banks. However, foreign banks may benefit from their foreign parents expertise and use of more advanced technologies. The remainder of the paper is organized as follows. Section 2 provides a review of the relevant literature. Section 3 presents the econometric methodology employed and Section 4 discuss the results. Section 5 concludes.

In this paper, we analyze the efficiency of the banking sector in India during the period of 2000–2006. We contribute to the existing literature by estimating both cost and profit efficiencies, assessing the exact density from the estimates, and including off-balance sheet data in the analysis. The main results from the Bayesian SFA are in agreement with previous studies in India, which find that public banks are the most efficient, followed by private domestic and foreign banks (Das and Ghosh, 2006, Sensarma, 2006 and Bhattacharya et al., 1997). However, the performance of all banks seems to be converging over time. Foreign banks largely improved their profit efficiency, outperforming the domestic banks in the last years of the sample. We argue that their presence has been favorable to the banking sector, as it enhances the competition and introduces more sophisticated technology and banking services. The average cost efficiency is 88% for the full sample and the average profit efficiency is 94%. These results, however, raise to 90% and 96%, respectively, when we account for off-balance sheet activities as one of the outputs. Therefore, OBS should be included as one of the outputs in studies of banking efficiency, specially to compare the performance among different ownership type institutions. As these activities represent a large share in the operations of foreign banks, their costs (profits) may be over(under)stated. The profit efficiency measures showed large improvement over time, varying from 91% to 97%, with benefits for the three ownership types. The equity over assets ratio was found to have a negative impact on efficiency measures. This is a reflection of the high capitalization level of foreign banks, which presented the lower efficiencies. The assets variable presented a positive relationship with profit efficiency, indicating that larger banks are more efficient than their counterparts. That way, the empirical results suggest that there are potential scale gains for the smaller institutions, which are mainly private domestic and foreign institutions. This study favors the existing policy of opening-up the Indian financial sector, with liberalization of foreign entry through their own subsidiaries and through acquisitions. This will push the domestic institutions closer to global best-practices. The public and private banks, however, also showed efficient strategies. Their concern will be to follow the international standards when the Indian government further deregulate the market.5 As for regulators, they are expected to support a sound and integrated financial system, with effective monitoring of its activities. The more globalized financial sector will require closer supervision of non-performing assets and of the system stability.