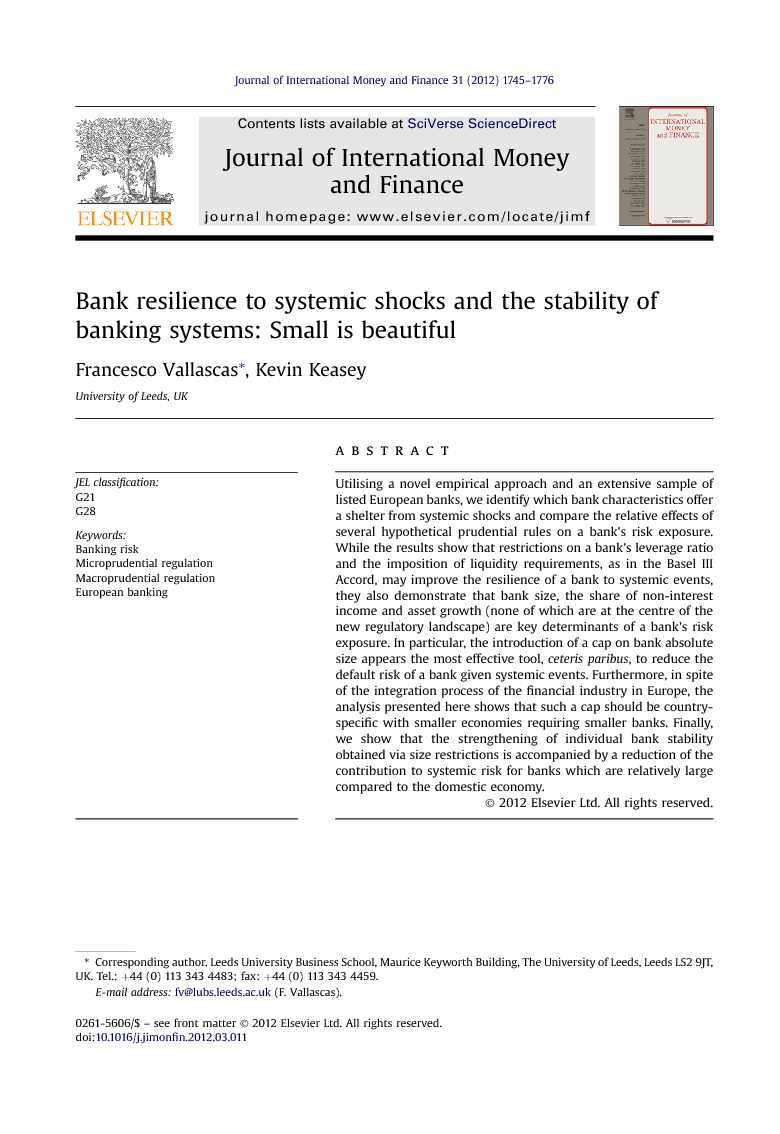 Utilising a novel empirical approach and an extensive sample of listed European banks, we identify which bank characteristics offer a shelter from systemic shocks and compare the relative effects of several hypothetical prudential rules on a bank’s risk exposure. While the results show that restrictions on a bank’s leverage ratio and the imposition of liquidity requirements, as in the Basel III Accord, may improve the resilience of a bank to systemic events, they also demonstrate that bank size, the share of non-interest income and asset growth (none of which are at the centre of the new regulatory landscape) are key determinants of a bank’s risk exposure. In particular, the introduction of a cap on bank absolute size appears the most effective tool, ceteris paribus, to reduce the default risk of a bank given systemic events. Furthermore, in spite of the integration process of the financial industry in Europe, the analysis presented here shows that such a cap should be country-specific with smaller economies requiring smaller banks. Finally, we show that the strengthening of individual bank stability obtained via size restrictions is accompanied by a reduction of the contribution to systemic risk for banks which are relatively large compared to the domestic economy.

This paper has analysed, within the European context, the determinants of the risk that banks fail under systemic shocks utilising a novel empirical approach based on contingent claim analysis and the Merton (1974) distance to default model. Overall, while the results support the introduction of leverage and liquidity requirements, as in the Basel III Accord, they also show that several bank characteristics that are not at the centre of the new regulatory landscape are key determinants of the risk that a bank fails from systemic shocks. The risk exposure of banks, both in normal and extreme systemic conditions, increases with size, the share of non-interest income activities and the growth of earning assets. Furthermore, the comparative analysis of the impact of different bank characteristics on bank exposure to shocks shows that, ceteris paribus, the Basel III rules are likely to be less effective than imposing a cap on bank absolute size. The design of any size restrictions appears, however, to be related to the size of the economy in which a bank is operating. More precisely, as the risk exposure of a bank increases with both absolute and systemic size (defined in relative terms with respect to the size of the economy), and in spite of the integration process of the financial industry in Europe, any regulatory intervention on size needs to be country-specific with smaller European economies needing smaller banks. Next, we demonstrate that the strengthen of individual bank stability obtained via size restrictions is accompanied by a reduction of the contribution to systemic risk for banks which are relatively large compared to the domestic economy. These results have relevant implications for the literature on the determinants of the optimal bank size that has generally assumed the perspective of the individual institution without any consideration for the systemic context (Krasa and Villamil, 1992 and Cerasi and Daltung, 2000). By contrast, the current paper highlights the importance of incorporating in any decision model of the optimal bank size the costs that a larger size produces in terms of exposure to systemic shocks and the linkages with the overall size of the economy. In sum, how to design a regulatory restriction on bank size does not appear an easy task for regulators, although the benefits in terms of bank resilience to shocks that, ceteris paribus, are associated to such a regulatory restriction seem particularly pronounced. The difficulties posed by such a regulatory intervention, and the importance of bank size for the exposure to systemic shocks, might favour the adoption of prudential rules specifically designed for large and complex financial institutions starting from those that the Financial Stability Board has promoted in terms of capital surcharge.