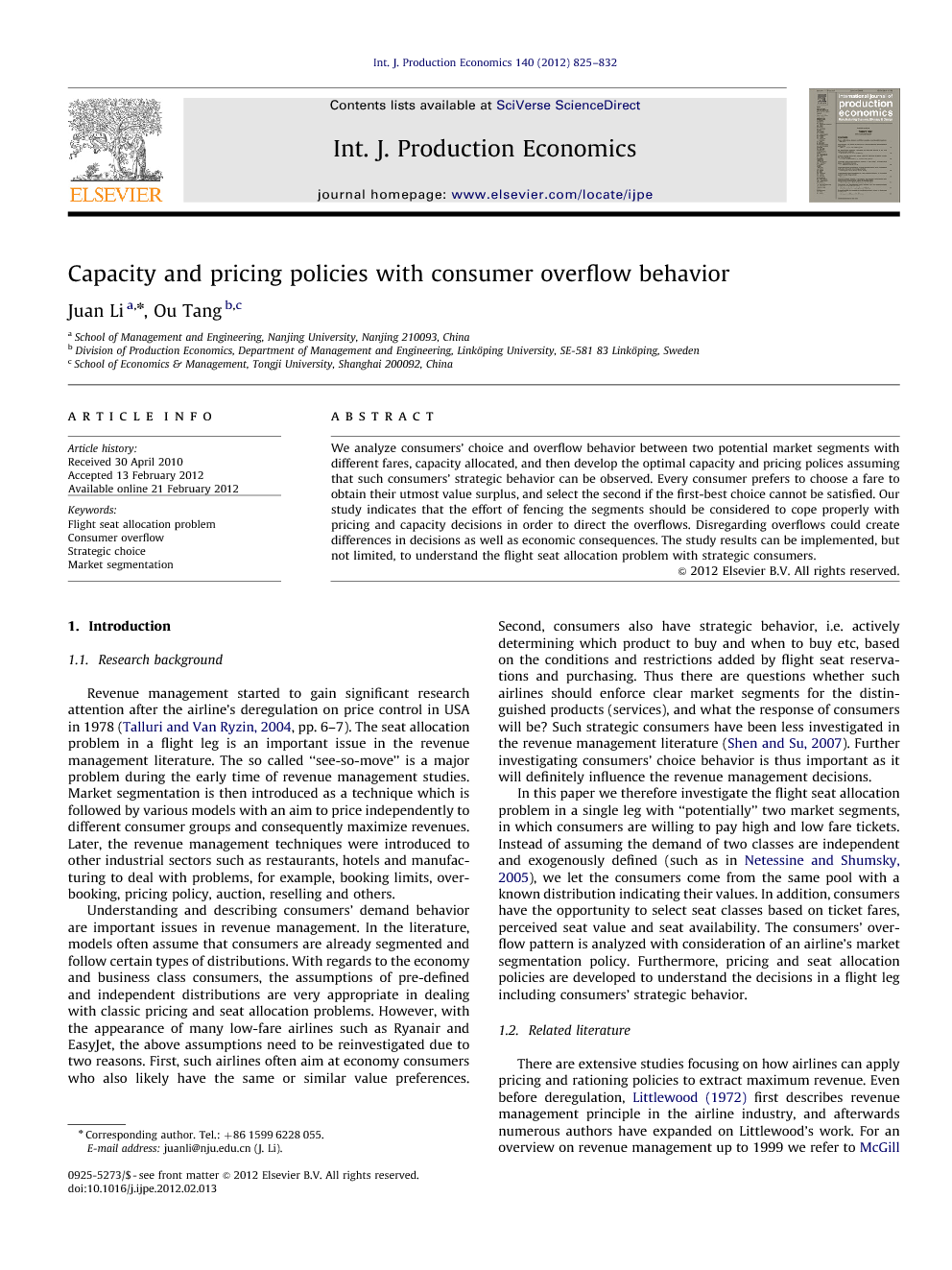 We analyze consumers' choice and overflow behavior between two potential market segments with different fares, capacity allocated, and then develop the optimal capacity and pricing polices assuming that such consumers' strategic behavior can be observed. Every consumer prefers to choose a fare to obtain their utmost value surplus, and select the second if the first-best choice cannot be satisfied. Our study indicates that the effort of fencing the segments should be considered to cope properly with pricing and capacity decisions in order to direct the overflows. Disregarding overflows could create differences in decisions as well as economic consequences. The study results can be implemented, but not limited, to understand the flight seat allocation problem with strategic consumers.

Revenue management started to gain significant research attention after the airline's deregulation on price control in USA in 1978 (Talluri and Van Ryzin, 2004, pp. 6–7). The seat allocation problem in a flight leg is an important issue in the revenue management literature. The so called “see-so-move” is a major problem during the early time of revenue management studies. Market segmentation is then introduced as a technique which is followed by various models with an aim to price independently to different consumer groups and consequently maximize revenues. Later, the revenue management techniques were introduced to other industrial sectors such as restaurants, hotels and manufacturing to deal with problems, for example, booking limits, overbooking, pricing policy, auction, reselling and others. Understanding and describing consumers' demand behavior are important issues in revenue management. In the literature, models often assume that consumers are already segmented and follow certain types of distributions. With regards to the economy and business class consumers, the assumptions of pre-defined and independent distributions are very appropriate in dealing with classic pricing and seat allocation problems. However, with the appearance of many low-fare airlines such as Ryanair and EasyJet, the above assumptions need to be reinvestigated due to two reasons. First, such airlines often aim at economy consumers who also likely have the same or similar value preferences. Second, consumers also have strategic behavior, i.e. actively determining which product to buy and when to buy etc, based on the conditions and restrictions added by flight seat reservations and purchasing. Thus there are questions whether such airlines should enforce clear market segments for the distinguished products (services), and what the response of consumers will be? Such strategic consumers have been less investigated in the revenue management literature (Shen and Su, 2007). Further investigating consumers' choice behavior is thus important as it will definitely influence the revenue management decisions. In this paper we therefore investigate the flight seat allocation problem in a single leg with “potentially” two market segments, in which consumers are willing to pay high and low fare tickets. Instead of assuming the demand of two classes are independent and exogenously defined (such as in Netessine and Shumsky, 2005), we let the consumers come from the same pool with a known distribution indicating their values. In addition, consumers have the opportunity to select seat classes based on ticket fares, perceived seat value and seat availability. The consumers' overflow pattern is analyzed with consideration of an airline's market segmentation policy. Furthermore, pricing and seat allocation policies are developed to understand the decisions in a flight leg including consumers' strategic behavior.

We have developed models to describe the consumer choice behavior and an airline's decision policy. The airline's optimal decisions with price–capacity sequence will be the same as in a capacity–price sequence, and in this paper we present only the former one. With the assumption that the consumer has the similar value distribution and they are allowed to overflow by choosing different fares, the airline still has a decision of bang-bang character with regard of capacity and booking limit, which should explain the popularity of cheap flight legs. Also we observe that the segment effort θ (which also affect consumer's choice value) should be carefully coordinated with the price level pL in order to direct the overflow volume (Corollary 3). In addition, disregarding consumer overflow may still have a chance to maintain the best revenue, however, the choice of θ value becomes more restrictive. The major contribution of this paper is its link with consumer choice behavior and airline's decision. The value of θ has been set in such a way that assuming a linear decreasing of the acceptance of the low fare tickets. This simple assumption provides convenience to observe and understand the changing pattern in current model. However, future research should include an investigation in order to understand precisely how θ varies with consumers and/or for various segments. In addition, investigating different value distributions could also be important. For instance, what happens if the consumer value has a distribution of two peaks? In this case, the consumers have an internal tendency to segment because of their value differentiations. Would the externally factors, such as airlines' pricing and capacity decisions interfering with consumer's segment choice? Also, additional issues such as uncertainty demand, time preference can be introduced into the model. Current study should provide a framework for investigating the above topics, but the modeling complexity is expected to increase dramatically.