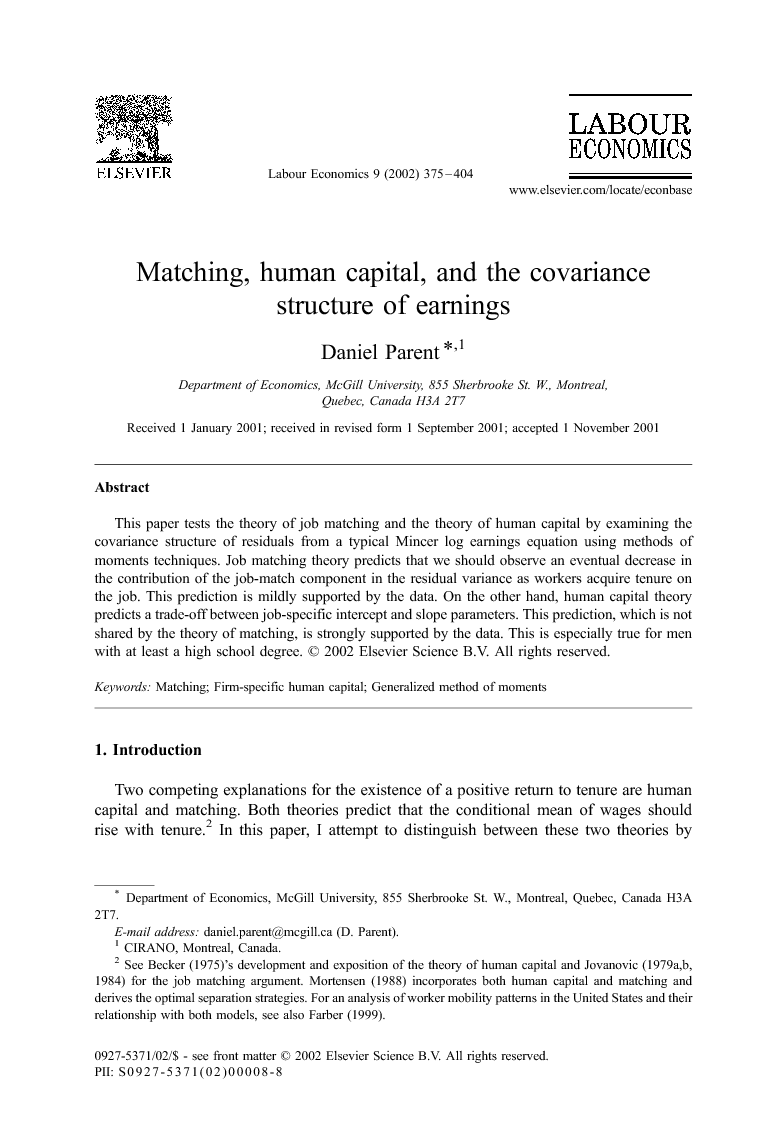 This paper tests the theory of job matching and the theory of human capital by examining the covariance structure of residuals from a typical Mincer log earnings equation using methods of moments techniques. Job matching theory predicts that we should observe an eventual decrease in the contribution of the job-match component in the residual variance as workers acquire tenure on the job. This prediction is mildly supported by the data. On the other hand, human capital theory predicts a trade-off between job-specific intercept and slope parameters. This prediction, which is not shared by the theory of matching, is strongly supported by the data. This is especially true for men with at least a high school degree.

Two competing explanations for the existence of a positive return to tenure are human capital and matching. Both theories predict that the conditional mean of wages should rise with tenure.2 In this paper, I attempt to distinguish between these two theories by focusing on their implications for the covariance structure of earnings. Using data from the National Longitudinal Survey of Youth (NLSY) over the period 1979–1996, I find strong evidence of a negative correlation between job-specific wage growth and the job-specific intercept, a prediction of the theory of human capital that is not shared by the theory of job matching. The existence of a return to employer tenure has been a subject of controversy over the last 15 years. Although ordinary least-squares estimates indicate a positive relationship between wages and tenure (e.g. Mincer and Jovanovic, 1981), endogeneity problems have led researchers to develop estimation methods that account for the fact that firm seniority is likely to be correlated with unobservable factors, such as the quality of the worker/firm match. Using data from the Panel Study of Income Dynamics (PSID), Abraham and Farber (1987), Altonji and Shakotko (1987), and Altonji and Williams (1997) find no evidence of a significant return to tenure, while Topel (1991) finds large returns. With data from the National Longitudinal Survey of Young Men, Marshall and Zarkin (1987) also find quite a small tenure effect once they empirically control for the selection process by which only acceptable wage offers on the current job are ever observed. Other authors have focused on the importance of industry-specific capital as a factor of wage growth. With data from the Displaced Worker Surveys, Neal (1995) finds that tenure with the predisplacement employer is positively correlated with the wage earned in the post-displacement job only for those workers who stay in the same industry, a result that is difficult to reconcile with the view that tenure measures only the accumulation of firm-specific skills. Using data from the PSID and the NLSY, Parent (2000) finds that by creating a measure of industry tenure and adding this measure to the log-wage equation, the firm tenure effect all but disappears. At a theoretical level, MacLeod and Malcomson (1993) find, in a simple model with competitive contract formation, that a positive or negative return to seniority can occur, depending on the nature of specific investments and the structure of market returns for human capital. Thus, we can see that finding no return to firm seniority when estimating a wage regression cannot necessarily be interpreted as evidence against the importance of firm-specific investments in an employment relationship. For one thing, it might simply reflect the fact that firms are paying the full costs of such investments as well as reaping the full returns. Hence, working with the first conditional moments of wages may not be the appropriate or more convincing way of assessing the relative importance of human capital vs. matching. In previous work, Hause (1980) modeled the second moments of wages, their variances and covariances, to test the prediction of the general human capital model that those who invest more should have both a steeper slope and a lower intercept in their wage profile. This prediction implies that the covariance between these two individual-specific parameters should be negative. In this paper, I extend Hause's approach by introducing jobs into the analysis. It is then possible to isolate a similar key prediction of human capital theory that there should be a trade-off between the job-specific intercept and the tenure slope. Other things being equal, those who start out with a lower salary invest more in human capital and consequently should have a steeper slope. In contrast, the pure theory of matching does not predict such a trade-off within jobs. In fact, in his work on the complementarity between the quality of a match and firm-specific investment, Jovanovic (1979a) shows that a better match should, ceteris paribus, involve more investment. I find strong evidence of such a trade-off. The only way that the theory of matching can account for the trade-off between the job-specific slope and the intercept is through human capital considerations. All this is not to say that matching is not an important phenomenon. For example, I show that the statistical fit provided by the simplest form of covariance structure implied by the theory of matching represents a significant improvement over a simpler structure that ignores matching altogether. Still, the patterns identified in the data provide strong support to the idea that human capital theory plays an important role in the wage formation process. A caveat is that this approach to discriminating between matching and human capital models rests on an equalizing differences view of human capital accumulation. Supposing that people differ only in their decision to invest, Rosen (1977) notes that there must be some unobservable factor that underlies this different behavior. This leads to a self-selection problem. Rosen points out that the proportion of variance explained by measurable factors in standard earnings function estimates is but a fraction of the total variance, even for individuals who have apparently similar attributes. By using panel data and by focusing on the restrictions that matching and human capital put on the time pattern of the variance of the residuals from a log-wage regression, one can provide additional control for unobservable individual characteristics while at the same time identify patterns consistent with either one of these theories.3 The paper is organized as follows. Section 2 match sketches the main results from the theory of matching with an emphasis on the predictions pertaining to the variance of the job-match component of the residual. Section 3 follows with a discussion of the theory of human capital and the covariance structure of earnings. Section 4 focuses on the empirical implementation of the models discussed in 2 and 3, including discussions of the data and the econometric methodology. Section 5 presents the results, and at the end of the section, I provide a discussion relating the results contained in this paper to the literature on the impact of training on the starting wage of trainees. Section 6 concludes the paper.

The theories of matching and human capital both predict that wages should be positively correlated with tenure in a cross section of workers. Much of the effort of researchers surrounding the issue of whether this relationship really reflects the accumulation of human capital has focused on trying to break the likely correlation between firm seniority and unobserved worker and job-match characteristics in an earnings function. This paper's objective is to exploit the fact that matching and human capital have different implications for the behavior of the second moments of earnings to assess the relative merits of both theories. Introducing firm-specific wage growth into Hause's (1980) method of testing human capital theory, I am able to find strong evidence suggesting the importance of human capital considerations in the wage formation process. More precisely, the estimated U-shaped pattern of the variance of wage residuals within jobs is a prediction that is exclusive to human capital theory and is not implied by the theory of job matching. Also, there is some evidence that investment in on-the-job training is more likely to occur earlier in the employment relationship as one switches for her/his first job to subsequent jobs. The selection process implied by matching that predicts a gradual truncation of the wage distribution as workers who draw a good match stay in their jobs longer receives mild support from the data. Given the strong evidence of a negative covariance between job-specific slopes and intercepts, we should probably not be terribly surprised that the sharp prediction of truncation of the wage distribution does not receive stronger support. After all, this prediction is derived under the assumption of no accumulation of human capital. The main conclusion from the study is that while some of the patterns predicted by the theory of matching are present in the data, it seems difficult to deny the major role played by human capital in the determination of wages.