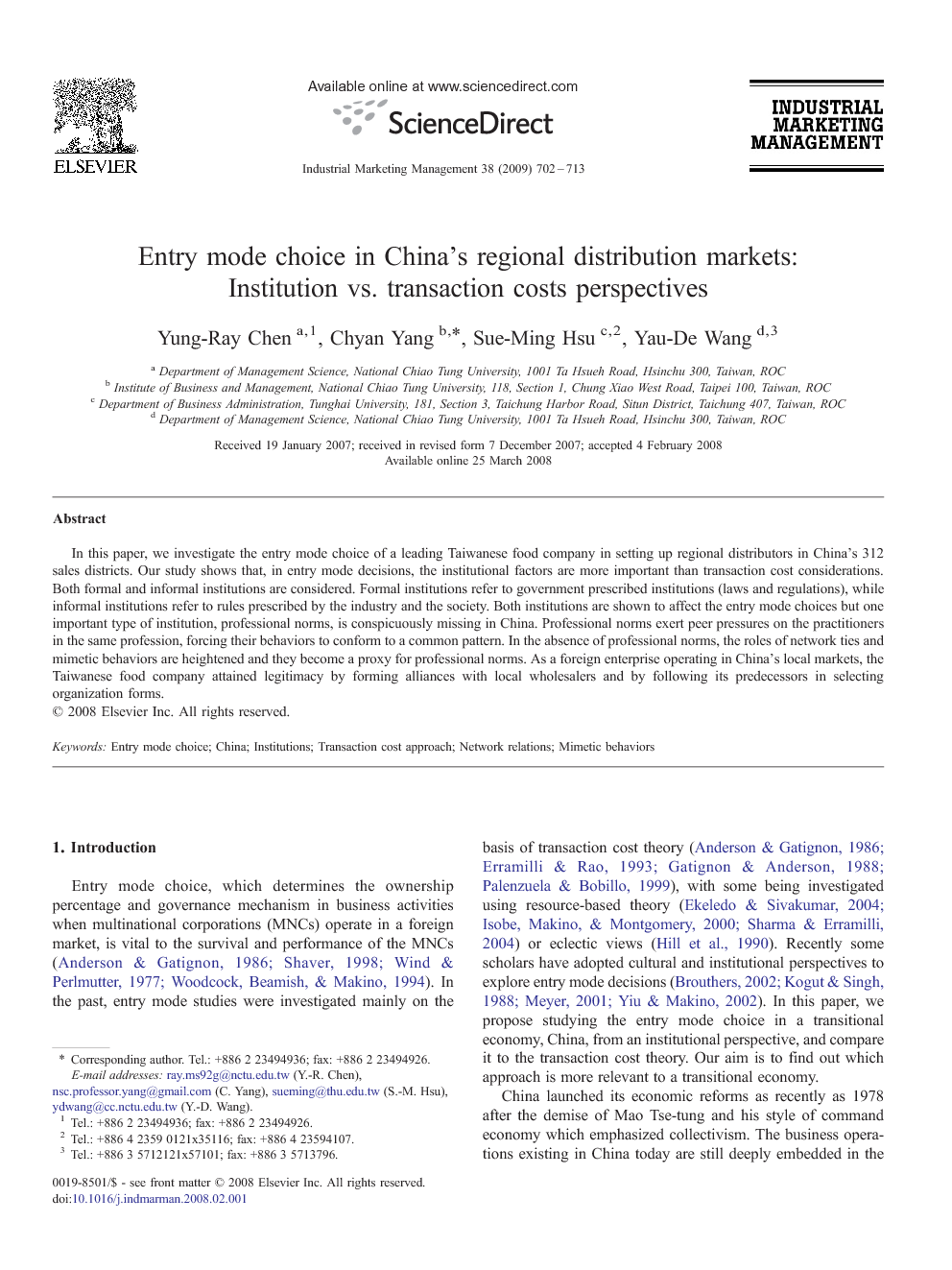 In this paper, we investigate the entry mode choice of a leading Taiwanese food company in setting up regional distributors in China's 312 sales districts. Our study shows that, in entry mode decisions, the institutional factors are more important than transaction cost considerations. Both formal and informal institutions are considered. Formal institutions refer to government prescribed institutions (laws and regulations), wh ile informal institutions refer to rules prescribed by the industry and the society. Both institutions are shown to affect the entry mode choices but one important type of institution, professional norms, is conspicuously missing in China. Professional norms exert peer pressures on the practitioner s in the same profession, forcing their behaviors to conform to a common pattern. In the absence of professional norms, the roles of network ties and mimetic behaviors are heightened and they become a proxy for professional norms. As a foreign enterprise operating in China's local markets, the Taiwanese food company attained legitimacy by forming alliances with local wholesalers and by following its predecessors in selecting organization forms.

Entry mode choice, which determines the ownership percentage and governance mechanism in business activities when multinational corporations (MNCs) operate in a foreign market, is vital to the survival and performance of the MNCs ( Anderson & Gatignon, 1986; Shaver, 1998; Wind & Perlmutter, 1977; Woodcock, Beamish, & Makino, 1994 ). In the past, entry mode studies were investigated mainly on thebasis of transaction cost theory ( Anderson & Gatignon, 1986; Erramilli & Rao, 1993; Ga tignon & Anderson, 1988; Palenzuela & Bobillo, 1999 ), with some being investigated using resource-based theory ( Ekeledo & Sivakumar, 2004; Isobe, Makino, & Montgomery, 2000; Sharma & Erramilli, 2004 ) or eclectic views ( Hill et al., 1990 ). Recently some scholars have adopted cultural and institutional perspectives to explore entry mode decisions ( Brouthers, 2002; Kogut & Singh, 1988; Meyer, 2001; Yiu & Makino, 2002 ). In this paper, we propose studying the entry mode choice in a transitional economy, China, from an institutional perspective, and compare it to the transaction cost theory. Our aim is to find out which approach is more relevant to a transitional economy. China launched its economic reforms as recently as 1978 after the demise of Mao Tse-tung and his style of command economy which emphasized collectivism. The business opera- tions existing in China today are still deeply embedded in the institutions inherited from the command economy ( Park & Luo, 2001 ). In a transitional economy, institutions are volatile and immature, exerting a large environmental uncertainty on foreign investors, particularly when considering the institutional environments established under communist rules that were drastically different from those in Western countries ( Clague, 1997; Meyer, 2001 ). Even in developed countries, many schol- ars have found that the entry mode choice model would be more complete if the institutional environment were considered along with the transaction cost variables ( Brouthers, 2002; Delios & Beamish, 1999; Yiu & Makino, 2002 ). In the case of China, we postulate that the institutional theory can offer more explanatory power than the transaction cost model with regard to entry mode selection. This is because when entering a transitional economy like China, reducing institutional risks is a more important concern than enhancing efficiency on which the transaction cost approach has focused. By institutional risks, we refer to the risks caused by uncertainty or non-transparency of local institutions. We will not only examine the influences of formal institutions such as laws and government regulations, but also those of informal institutions. Informal institutions refer to rules and norms established by the industry or the society. Informal institutions are not bestowed with coercive power, but just like formal institutions, they restrain the behaviors of the relevant actors. We use the sales district as the unit of analysis, and our sample is composed of the entry mode choices of the regional distributors of Taiwan's largest food company, President Food Co., in its 312 sales districts in China locating in 267 of China's major cities. By studying the entry mode of the distributor in each sales district, we highlight the impacts of institutions, which vary across regions, on entry mode choice. Today, China is widely known as the “ world's factory ” with a cheap labor force and an immense manufacturing power. Most studies on foreign investment in China have focused on the manufacturing aspects, but little research has been conducted on the marketing channels. By setting their eyes on the enormous market opportunities, many multinational firms have begun to explore the fast-growing domestic markets of China. This paper sets out to study the determinants of the entry mode choice of distributors in different sales districts in China. The paper offers two distinctive features: First, it studies the differences in regional institutions in determining entry mode choices in a single country for a single company; second, it highlights the importance of institutions even when the differences in national cultures seem to be small between the source and the host country. We hypothesize that institutional environments are more important than transaction cost factors in determining the entry mode choice. To test the hypothesis, we will incorporate both institution and transaction cost related variables in the entry mode decision model and show that transaction cost variables are dispensable. Three sets of informal institutions will be assessed in our study: network ties, mimetic behaviors and professional norms. Network ties, known as “ guanxi ” in China, refer to personal and business connections which have been proven to be critical to business operations in China ( Xin & Pearce, 1996 ). Mimetic behaviors refer to a tendency to follow the market leaders, the successful peers, or the predecessors originated from the same country ( Haunschild & Miner, 1997 ). Professional norms refer to expectations about the behaviors that are shared by practitioners in the same professions ( DiMaggio & Powell, 1983 ).

In this paper we have studied the entry mode choice of regional distributors in the China market by a leading Taiwanese food company, President Food Co. Our findings indicate that the institutional environment is more important than tran- saction cost considerations in the entry mode choice. In fact, transaction cost-related variables provide insignificant expla- natory power to the entry mode choice when institutional variables are present. We can almost say that it is only institutions that matter. We attribute this result to the fact that China is a transitional economy with incomplete or immature market institutions exerting a high risk to foreign investors, which would have to concentrate their efforts on risk control rather than cost minimization. The key message of the institutional theory is that organizations have to adopt certain forms and processes in order to attain legitimacy in the community in which the organization operates. Legitimacy is critical to the reduction of risks in a volatile environment, especially for a foreign enterprise that offers food products for people's daily consumption. Our study found that both formal and informal institutions are important constraining forces in the entry mode decision. Among informal institutions, network relations stand out as a very influential factor. However, one important informal institution, which is understood to be vital in mature market economies but is conspicuously missing in China, is profes- sional norms. This is probably due to the fact that China's privately-owned businesses constitute only a small proportion of the economic activities, and professionalism has yet to be recognized in the Chinese society as it had been deliberately suppressed in the past, particularly during the time of the Cultural Revolution. In the absence of professional norms, the power of network ties is inflated and serves as a proxy for professional norms. In the food distribution industry that we studied, political institutions and network ties are important powers in the event of dispute settlements and for protecting property rights. Foreign investors are subject to “ institutional liabilities ” in the sense that they are often under more stringent regulatory controls and stronger social pressures than the indigenous firms. The more the institutional liabilities they face, the lower the control mode they will choose in entering the host country. Therefore, wholly-owned subsidiary may be avoided even if the government does not forbid it. The other interesting finding of this study is that late-coming foreign investors tend to follow their successful predecessors in entry mode selection. This mimetic behavior not only serves the purpose of risk reduction, but also enables the followers to take advantage of the network assets that the predecessors have already accumulated. In a sense, the predecessors have paid the sunk costs for network-learning and have helped construct a web of working relationships, which the followers can exploit. This mimetic behavior may eventually contribute to the formation of an industry norm, to which the market leaders will benefit most, however. We interpret this as a positive cumulative process of building institutions. In this process, the legitimacy of the practices is attained by business success,reflecting an old Chinese proverb: “ the successful one is the king; the failing ones are all outlaws. ” A few caveats must be noted, however. First, the data is from a single company, PFC. Although the company is large enough to provide observations on entry mode in all major cities of China, caution must be exercised when generalizing the results as some company-specific features may contaminate the data. Second, theremaybemorevarietiesininstitutionsthanintransactioncosts across regions, as transaction costs tend to be more related to product characteristics than to regions. Therefore, institutions have more explanatory power than transaction costs probably because we are analyzing the regional differences. Third, due to the difficulty in obtaining sophisticated survey data, measure- ments on institutional factors have been simplified to a manage- able level. This may conceal some important information regarding institutional environments in China.