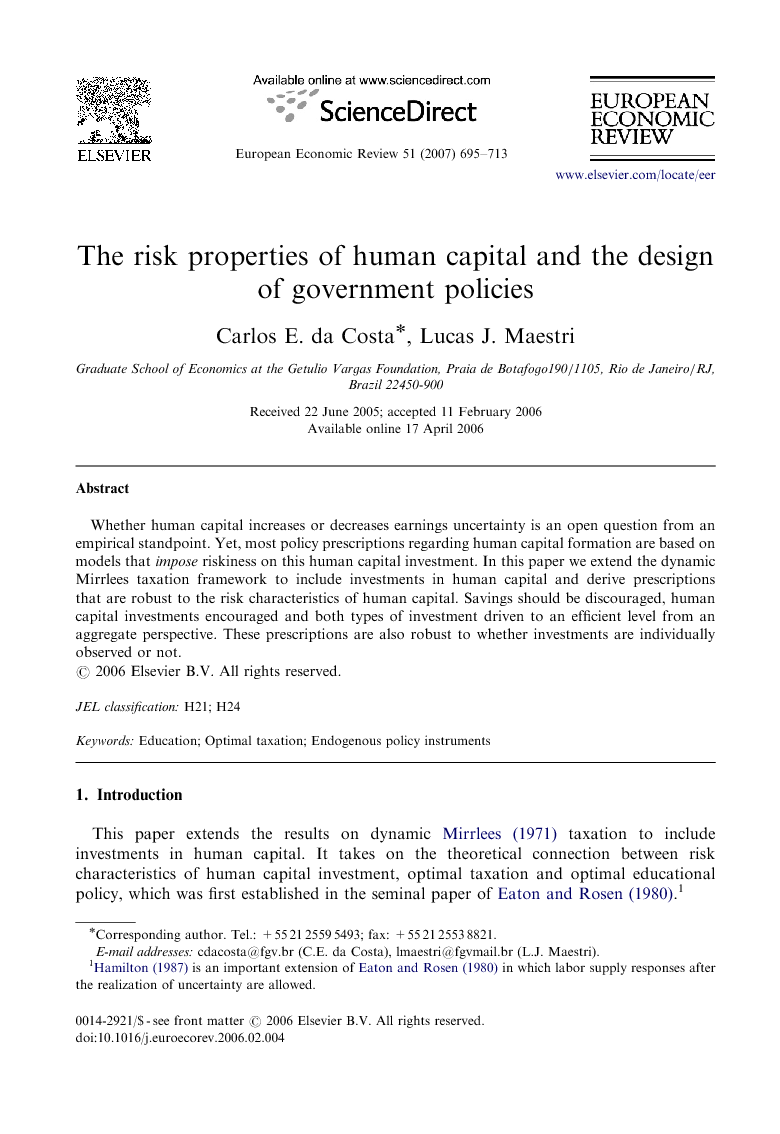 This paper extends the results on dynamic Mirrlees (1971) taxation to include investments in human capital. It takes on the theoretical connection between risk characteristics of human capital investment, optimal taxation and optimal educational policy, which was first established in the seminal paper of Eaton and Rosen (1980).1 Human capital investment is described in the literature as a life long choice subject to a great deal of idiosyncratic uncertainty against which no markets exist to insure. Moreover, provided that human capital is risky, the private optimum level of investment will be lower than the social optimum. Optimal policies derived under these assumptions will then prescribe the use of a proportional labor income tax to increase the agents’ expected utility and educational subsidies to ameliorate the problem of under-investment in human capital. The relevant and still unanswered empirical question2 is, therefore, whether the return on human capital is risky, i.e., whether, at the margin, most of the increase in productivity takes place when the marginal utility of consumption is lower. As pointed out by Hamilton (1987, p. 380): “The basic requirement for the result [social welfare is increasing in human capital at the optimum private choices] is that the marginal return to human capital remains high for favorable states of the world in which marginal utility of income is low.” We build a two periods model along the lines of Hamilton (1987), which extends Eaton and Rosen (1980) by allowing for labor supply responses later in life, but follow the new dynamic public finance literature in considering policy instruments that are endogenously determined. After describing the informational structure of the economy, optimal policies are derived in two steps. First, we use the revelation principle to determine optimal allocations by means of a truthful revelation direct mechanism. Then, we characterize tax instruments capable of implementing such allocations.3 As it turns out, with fewer restrictions on preferences we are able to show that savings should be set below and human capital investments above what would be privately chosen, independently of whether investment in human capital increases or reduces wage risk. Risk sharing is taken care of by the non-linear income tax schedule. The role of other instruments is simply to relax the incentive compatibility constraints associated with the direct mechanism by punishing off-equilibrium behavior. What we show is that agents who intend to announce falsely their productivities invest less in education and save more than agents who intend to abide by the rules, regardless of the risk characteristic of human capital. Another property of optimal policies is the aggregate efficiency for both types of investment: Physical and human capital. On the one hand, agents private choices are distorted, while on the other the aggregate return is determined by a condition compatible with the prescription of no capital income taxation of Judd (1985), Chamley (1986) and Lucas (1990). This result is in contrast with the prescriptions found in Anderson and Anderberg (2003) where risk-enhancing (reducing) human capital should be set at a level which is lower (higher) than the unconstrained efficient level. As for implementation, our results parallel those of Albanesi and Sleet (2005), Golosov and Tsyvinski (2004) and Kocherlakota (2004): Neither do education subsidies substitute for compulsory education nor does capital income taxation substitute for savings control. We characterize implementation via taxes and show that marginal tax rates on the return of both forms of investment must depend on the second period labor output. When the savings and human capital investment are not controlled by the government, encouragement of education and discouragement of savings still obtains albeit with slightly different meaning. If the government policy is with respect to either savings or human capital formation but not both at the same time, then it is optimal to tax savings or subsidize education. When both instruments are used, the signs of tax rates are ambiguous, though the formulae resemble the encouragement/discouragement expressions derived in Mirrlees (1976). The paper is organized as follows. Section 2 presents the economy and discusses the competitive equilibrium and the unconstrained optimum. Section 3 describes constrained optimum allocations when the government has complete control of agents’ investment choices. Implementation is discussed in Section 3.2, and in Section 4 the case of unobserved investment is considered. Section 6 concludes.

In this paper we extend the results on dynamic Mirrlees taxation to include investments in human capital. We analyze optimal income taxation and educational policy in a model of human capital formation with wage uncertainty due to idiosyncratic shocks to productivity along the lines of Eaton and Rosen (1980) and Hamilton (1987). We then derive educational policy prescriptions which are robust to the risk characteristics of human capital: Government should encourage education and discourage savings. This is contrast with the rest of the literature where policy prescription depend on the risk characteristics that are imposed on the nature of human capital investments. Robustness is important for no conclusive evidence is yet available concerning risk characteristics of human capital. In our model, robustness is due to our prescriptions being driven by reasons that are different from the usual ones. The government should finance education and tax savings to punish those who intend to deviate and free-ride on the government's redistributive programs, claiming to be less productive than they really are. Because the pattern of choices driven by deviant behavior is independent of the risk characteristics of human capital investment, so are policy prescriptions. We also show that our results are also robust to different possibilities regarding the observability of investment choices. Specifically, wedges between marginal private costs and benefits are created with instruments that are feasible according to the informational structure of the problem. Signs of wedges, however, are invariant to these informational changes.