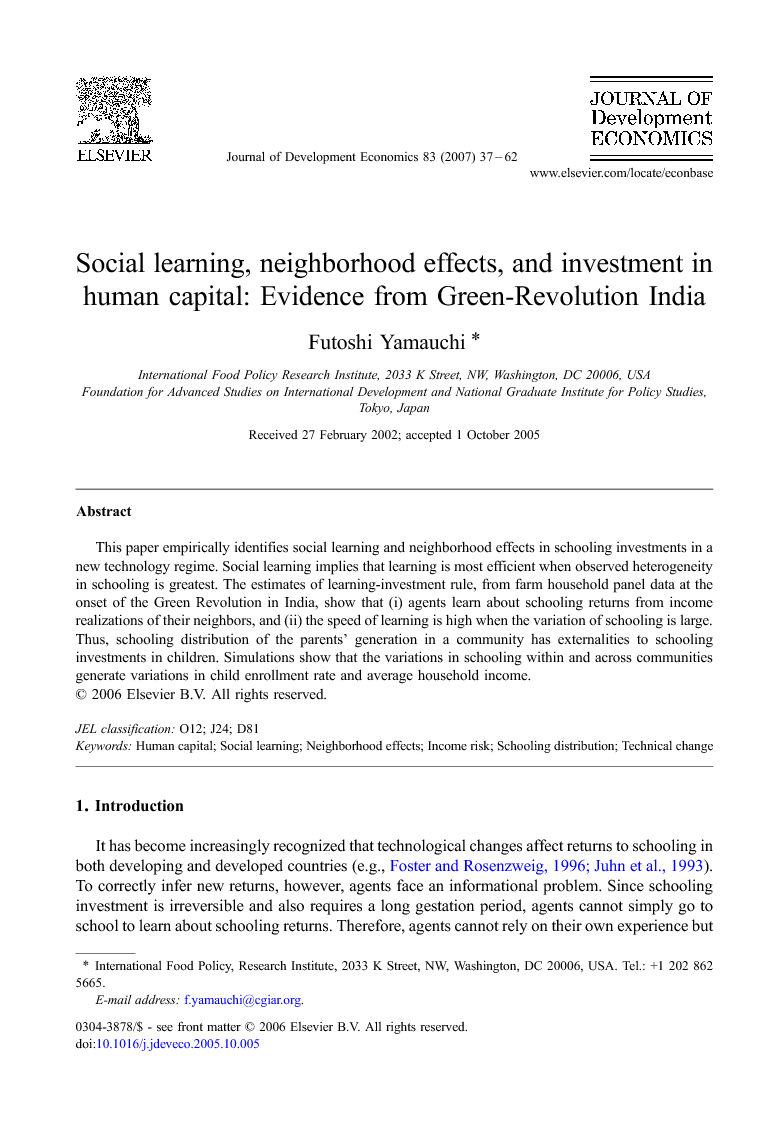 This paper empirically identifies social learning and neighborhood effects in schooling investments in a new technology regime. Social learning implies that learning is most efficient when observed heterogeneity in schooling is greatest. The estimates of learning-investment rule, from farm household panel data at the onset of the Green Revolution in India, show that (i) agents learn about schooling returns from income realizations of their neighbors, and (ii) the speed of learning is high when the variation of schooling is large. Thus, schooling distribution of the parents' generation in a community has externalities to schooling investments in children. Simulations show that the variations in schooling within and across communities generate variations in child enrollment rate and average household income.

This paper shows that neighborhood factors matter in schooling investments, with evidence from farm household panel data from the Green Revolution in India. In the face of the HYV availability that altered schooling returns, agents learned of the benefits of new returns to schooling from neighbors and adjusted schooling investments over time. In this context, the empirical results clarify the importance of schooling distribution of the parents' generation within a community. Observed heterogeneity of schooling in the community increases informativeness on schooling returns, since agents easily compare income changes of differentially educated agents. The homogeneous community with small differences in schooling makes it hard to identify the effect of schooling on income. This intuitive prediction was supported in the empirical analysis of this paper. However, as discussed, identifying social learning is a challenging empirical issue. The situation where schooling returns had exogenously changed provides an ideal empirical setting for investigating the role of social learning in child schooling decisions. However, our conclusion crucially depends on the assumption that the initial prior on changes in schooling returns was uncorrelated with the schooling distribution of the parents' generation. Only if this assumption is satisfied, our empirical findings prove a unique proposition that learning is most efficient when observed heterogeneity in education is greatest. To increase learning efficiency in a society, should the educated and uneducated be integrated or segregated by communities? Our findings imply that the integration of the two heterogeneous populations in a community is more desirable than the segregation. Intuitively, given that a mixture of the two groups in a neighborhood enables the comparison between the groups – schooling returns, in this paper – all communities should have the educated and uneducated. This implication is against a common finding on positive sorting in residential choice behavior (e.g., Fernandez, 2001). If agents are sorted by their types, including education, in the choice of their residential areas, the population becomes more homogeneous in a community and weakens the response of schooling investments to a change in schooling returns. If social learning effects are not internalized in agents' location choice, the evidence of this paper justifies a socially desirable policy intervention. This implication should not only be relevant in the example of education but could be equally applicable to other issues such as social class formation and the division of labor. However, the relevance of the findings in this paper depends on the frequency of structural changes. As stated in Schultz (1975), if the benefit of education generates from situations of disequilibrium such as the Green Revolution, the augmented returns to schooling will eventually decrease as the knowledge of new technologies diffuses evenly and widely in the population. All these issues still remain unexplored and should be examined carefully in the context of developing countries.