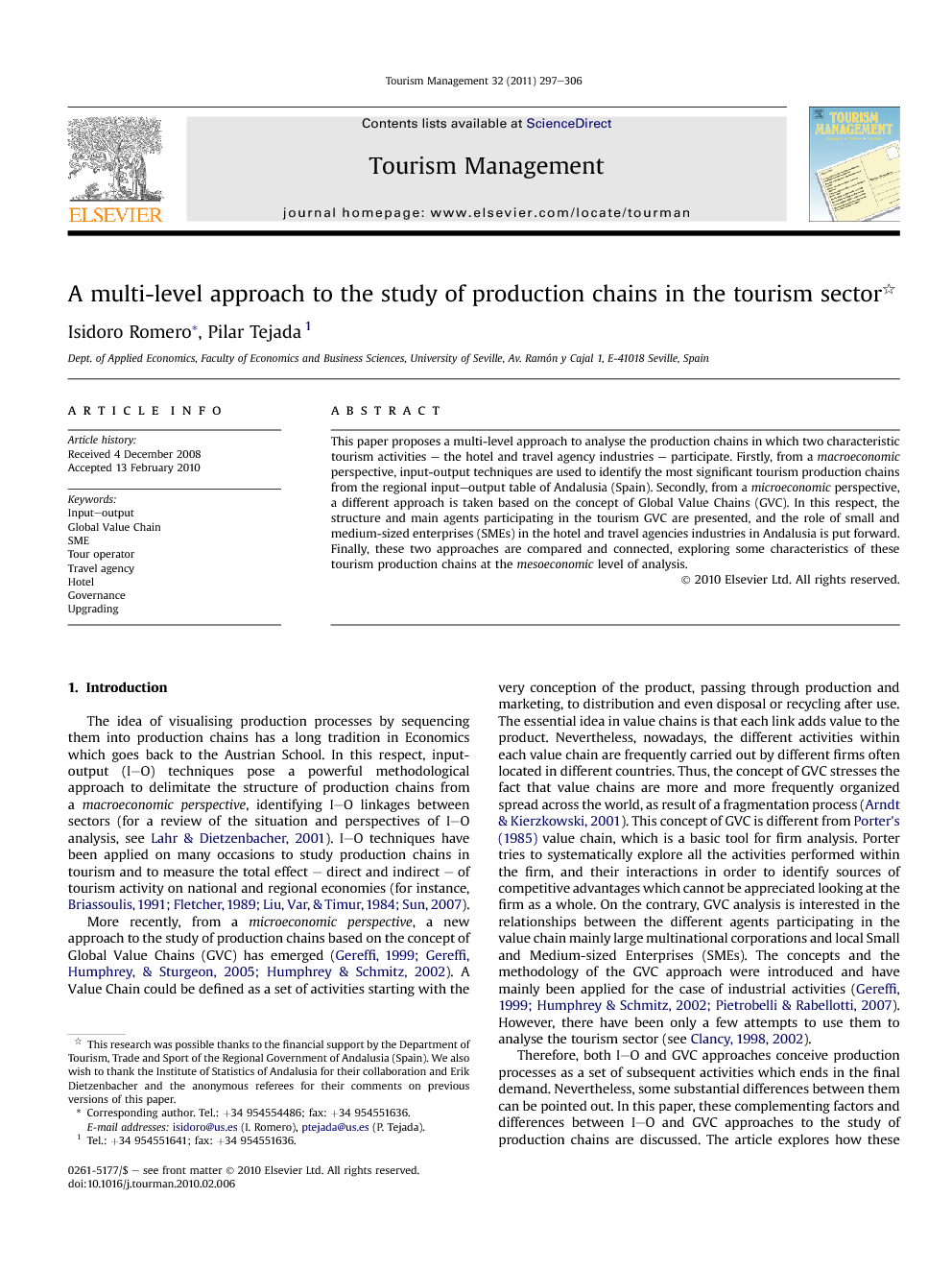 This paper proposes a multi-level approach to analyse the production chains in which two characteristic tourism activities – the hotel and travel agency industries – participate. Firstly, from a macroeconomic perspective, input-output techniques are used to identify the most significant tourism production chains from the regional input–output table of Andalusia (Spain). Secondly, from a microeconomic perspective, a different approach is taken based on the concept of Global Value Chains (GVC). In this respect, the structure and main agents participating in the tourism GVC are presented, and the role of small and medium-sized enterprises (SMEs) in the hotel and travel agencies industries in Andalusia is put forward. Finally, these two approaches are compared and connected, exploring some characteristics of these tourism production chains at the mesoeconomic level of analysis.

The idea of visualising production processes by sequencing them into production chains has a long tradition in Economics which goes back to the Austrian School. In this respect, input-output (I–O) techniques pose a powerful methodological approach to delimitate the structure of production chains from a macroeconomic perspective, identifying I–O linkages between sectors (for a review of the situation and perspectives of I–O analysis, see Lahr & Dietzenbacher, 2001). I–O techniques have been applied on many occasions to study production chains in tourism and to measure the total effect – direct and indirect – of tourism activity on national and regional economies (for instance, Briassoulis, 1991, Fletcher, 1989, Liu et al., 1984 and Sun, 2007). More recently, from a microeconomic perspective, a new approach to the study of production chains based on the concept of Global Value Chains (GVC) has emerged ( Gereffi, 1999, Gereffi et al., 2005 and Humphrey and Schmitz, 2002). A Value Chain could be defined as a set of activities starting with the very conception of the product, passing through production and marketing, to distribution and even disposal or recycling after use. The essential idea in value chains is that each link adds value to the product. Nevertheless, nowadays, the different activities within each value chain are frequently carried out by different firms often located in different countries. Thus, the concept of GVC stresses the fact that value chains are more and more frequently organized spread across the world, as result of a fragmentation process ( Arndt & Kierzkowski, 2001). This concept of GVC is different from Porter's (1985) value chain, which is a basic tool for firm analysis. Porter tries to systematically explore all the activities performed within the firm, and their interactions in order to identify sources of competitive advantages which cannot be appreciated looking at the firm as a whole. On the contrary, GVC analysis is interested in the relationships between the different agents participating in the value chain mainly large multinational corporations and local Small and Medium-sized Enterprises (SMEs). The concepts and the methodology of the GVC approach were introduced and have mainly been applied for the case of industrial activities ( Gereffi, 1999, Humphrey and Schmitz, 2002 and Pietrobelli and Rabellotti, 2007). However, there have been only a few attempts to use them to analyse the tourism sector (see Clancy, 1998 and Clancy, 2002). Therefore, both I–O and GVC approaches conceive production processes as a set of subsequent activities which ends in the final demand. Nevertheless, some substantial differences between them can be pointed out. In this paper, these complementing factors and differences between I–O and GVC approaches to the study of production chains are discussed. The article explores how these two conceptual and methodological frameworks can be combined to provide a more complex picture of the production chains in the tourism industry. In this respect, a multi-level approach to the study of tourism production chains is proposed in this paper which aims at analysing the main characteristics of these chains from the macroeconomic, mesoeconomic and microeconomic perspectives. In order to present this methodological approach, the production/value chains of the tourism industry in Andalusia are analysed in this paper. Specifically, the study presented has a focus on the production chains in which two characteristic tourism sectors participate: the hotel and the travel agency industries. Though these two sectors do not exhaust the whole scope of the tourism phenomenon, they represent the backbone of the tourism industry. Andalusia, a region located in the south of Spain, is an important international destination. In terms of receptive tourism, it is equivalent to Thailand, while it more than doubles other well-known destinations such as Cuba, the Dominican Republic, or Argentina. During 2008, a total of 25.1 million tourists visited the region, according to the Andalusian tourism survey (Instituto de Estadística de Andalucía, 2009a). 61.2% of them were Spanish, whereas the remaining 38.8% were foreigners. The tourism sector -the most significant industry in the region – produced goods and services valued at €18.335 million in 2007, contributing 12.5% to the regional GDP (Exceltur, 2009). This paper is organized in three main sections. The first one illustrates the application of the I–O techniques to analyse production chains in tourism. The second one addresses the issue of GVCs in the tourism industry. In order to do this, a study about the role of SMEs in the tourism industry in Andalusia is put forward as an example of the application of the GVC concepts and methodology in tourism research. The third section compares the previous two methodologies and explores the way to connect them studying production chains at the mesoeconomic level of analysis. The paper concludes with some final considerations about the potential of this methodological approach to the study of the production chains, its limitations and some possible extensions.

This paper proposes a multi-level approach to the study of production chains and explores the potential of this mixed methodology in order to provide a more complex view of the structure and dynamism in the tourism sector. This analytical proposal aims at identifying and connecting the most significant characteristics of the production chains at the macro, meso and microeconomic levels. To illustrate this approach, a study of the tourism production chains in Andalusia – with a focus on hotels and travel agencies – has been presented. In this respect, the I–O application presented in the second section of the paper shows the main regional inter-sectoral linkages within the tourism sector in Andalusia, providing a macroeconomic picture of the tourism production chains. This type of exercise reveals what the main direct and indirect effects of the tourism activity on the production system are and how these effects are transmitted throughout the regional economy. However, I–O analysis, due to its static character and its level of aggregation, provides little information about the inter-firm interactions within production chains. This limitation can be overcome applying the conceptual and theoretical GVC tools to delve into the microeconomic foundations of these production chains. Thus, the study about the participation of Andalusian SMEs in the TGVC presented in the third section of this paper explores the possibilities of applying the GVC approach – originally conceived for industrial activities – to tourism studies. In this respect, the study conducted leads to the conclusion that some categories of GVC analysis need to be adapted to be used in tourism research. Specifically, in this paper it is defended that the governance models proposed in the literature are not suitable to capture the singularities of the TGVC. In this sense, from the perspective of the hotel industry, the tourism production chains have many of the characteristics of Gereffi's ‘buyer-driven’ commodity chain model, whereas, from the perspective of the travel agencies, the configuration of the chain has a resemblance to Gereffi's ‘producer-driven’ chains. Nevertheless, what both groups of facts are showing is the presence of a hybrid model of governance that is characteristic of the tourism industry as a whole, which might be called an ‘intermediary-driven’ value chain. The specificity of this model lies in the fact that the agents exerting the governance are neither situated at the end of the production chain – as in the buyer-driven model – nor at the beginning – as in the producer-driven model. On the contrary, the study cases of SMEs – hotels and travel agencies – in Andalusia presented in this paper show the core role of the large vertically-integrated tour operators assuming the governance in the TGVC. These intermediaries design and assemble the tourism products and coordinate the tourism value chain from their central position between the primary suppliers and the retailers. Nevertheless, the macroeconomic perspective provided by the I–O analysis and the microeconomic perspective provided by the GVC approach leave a gap to be filled at the mesoeconomic level of analysis. Undertaking this interconnection, a more complete and rich picture of the tourism production chains can be achieved, contributing to explain how the microeconomic performance of firms within the tourism sector has certain macroeconomic consequences at an aggregated level. In this paper, a first attempt at developing such an integration has been made, using data for hotels and travel agencies in Andalusia, and some possible applications within this mesoeconomic analysis of production chains have been suggested. In this respect, on the one hand, SMEs in the tourism sector have been shown to have a larger impact on the regional economy in terms of pulling power when compared with large companies in their sector. However, on the other hand, SMEs in the hotel and, especially, in the travel agency industries seems to be characterised by a high level of productive dependency on their main supplier (when compared with SMEs in other sectors). This feature condemns them to a situation of strong subordination to the large vertically-integrated corporations assuming the governance of the TGVC. However, the potential of this multi-level approach to the study of production chains has only partially been exploited in this paper due to data constraints. This represents a limitation of this paper and also a difficulty for developing the methodological approach proposed in it. Certainly, this multi-level analysis of production chains is very demanding in terms of data, especially when trying to link the I–O and the GVC approaches at the mesoeconomic level of analysis. Nevertheless, two different methods have been suggested in the paper to implement such an interconnection in applied research following either a bottom-up strategy or a top-down one. Finally, some extensions within this framework are possible. For instance, it would be interesting to test whether different patterns of GVC governance for the firms operating in regional clusters lead to different sizes for the regional backward and/or forward linkages. Thus, it would be possible to identify those cases in which the integration of local SMEs in GVC can be more beneficial for them and can have a larger impact on local and regional development for the territories in which they operate. These macroeconomic implications of the GVC analysis have not yet been sufficiently considered in the literature and would merit being investigated further. Moreover, it would be interesting to check whether different types of tourism destinations – i.e., coastal areas versus historic and cultural centres and rural areas; or emerging versus mature destinations – are associated with different patterns of governance by large tour operators. If so, the following step would be to explore the consequences in terms of productive dependence for the local SMEs –from a mesoeconomic perspective – and try to measure the subsequent possible differences regarding local economic impact – from a macroeconomic perspective. Further research is also needed to more accurately characterise the ‘intermediary-driven’ value chain model proposed in this paper, investigating the role of large vertically-integrated tour operators in the governance of the GVC.