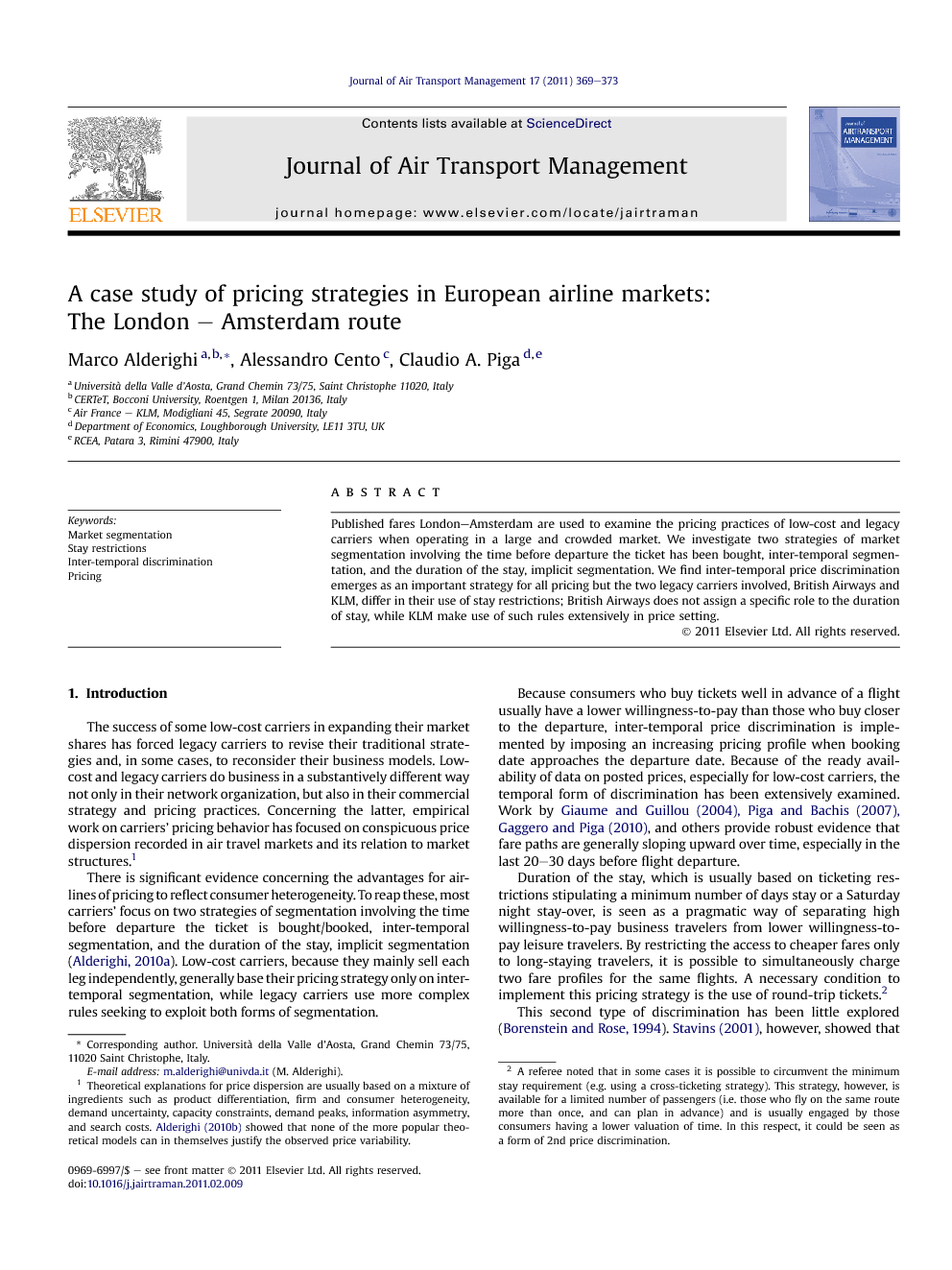 Published fares London–Amsterdam are used to examine the pricing practices of low-cost and legacy carriers when operating in a large and crowded market. We investigate two strategies of market segmentation involving the time before departure the ticket has been bought, inter-temporal segmentation, and the duration of the stay, implicit segmentation. We find inter-temporal price discrimination emerges as an important strategy for all pricing but the two legacy carriers involved, British Airways and KLM, differ in their use of stay restrictions; British Airways does not assign a specific role to the duration of stay, while KLM make use of such rules extensively in price setting.

The success of some low-cost carriers in expanding their market shares has forced legacy carriers to revise their traditional strategies and, in some cases, to reconsider their business models. Low-cost and legacy carriers do business in a substantively different way not only in their network organization, but also in their commercial strategy and pricing practices. Concerning the latter, empirical work on carriers’ pricing behavior has focused on conspicuous price dispersion recorded in air travel markets and its relation to market structures.1 There is significant evidence concerning the advantages for airlines of pricing to reflect consumer heterogeneity. To reap these, most carriers’ focus on two strategies of segmentation involving the time before departure the ticket is bought/booked, inter-temporal segmentation, and the duration of the stay, implicit segmentation (Alderighi, 2010a). Low-cost carriers, because they mainly sell each leg independently, generally base their pricing strategy only on inter-temporal segmentation, while legacy carriers use more complex rules seeking to exploit both forms of segmentation. Because consumers who buy tickets well in advance of a flight usually have a lower willingness-to-pay than those who buy closer to the departure, inter-temporal price discrimination is implemented by imposing an increasing pricing profile when booking date approaches the departure date. Because of the ready availability of data on posted prices, especially for low-cost carriers, the temporal form of discrimination has been extensively examined. Work by Giaume and Guillou, 2004, Piga and Bachis, 2007 and Gaggero and Piga, 2010, and others provide robust evidence that fare paths are generally sloping upward over time, especially in the last 20–30 days before flight departure. Duration of the stay, which is usually based on ticketing restrictions stipulating a minimum number of days stay or a Saturday night stay-over, is seen as a pragmatic way of separating high willingness-to-pay business travelers from lower willingness-to-pay leisure travelers. By restricting the access to cheaper fares only to long-staying travelers, it is possible to simultaneously charge two fare profiles for the same flights. A necessary condition to implement this pricing strategy is the use of round-trip tickets.2 This second type of discrimination has been little explored (Borenstein and Rose, 1994). Stavins (2001), however, showed that Saturday-night stay-over and advance-purchase requirements have a significant impact on prices while Puller et al. (2009) found that minimum and maximum stay restrictions play an important role in revenue generation. Escobari and Jindapon (2008) also found robust evidence that refundable ticket prices are significantly higher than non-refundable ones, which partially supports implicit segmentation (business travelers buy refundable tickets while leisure travelers tend to buy non-refund) because refundability can be also interpreted as an alternative way to implement inter-temporal segmentation. The interest here is on whether there are substantial differences between low-cost and legacy carriers in their segmentation strategies, and on the respective merits of the various segmentation approaches in very competitive market situations. To shed some light on these questions, a case study is conducted on the route linking London and Amsterdam between 1st and 15th March, 2009. This is one of the most important routes in Europe which, being insulated from competition from other transportation modes, features a high degree of intra-modal competition. It is supplied by a mix of low-cost and legacy carriers and used by business and leisure travelers. Two different typologies of tickets are considered: round-trip tickets corresponding to one-day stays and round-trip tickets corresponding to one-week stays.

It emerges that inter-temporal price discrimination is a prominent feature of airline pricing strategies, given that average fares increase by about 3% each day as departure approaches, with a cumulative 80% increase in the last 20 days. Regarding KLM and British Airways there are significant differences in their pricing behavior; KLM uses both the booking time before departure and the minimum stay as a discriminating device, whereas British Airways focuses on inter-temporal price discrimination only. We also find that British Airways’ price setting, at least for its cheapest fares, is similar to the low-cost approach, although it is generally applied using higher fares; we cannot however distinguish whether this is due to a hub premium or a brand premium. KLM’s behavior suggests that other strategies usually employed by legacy carriers to price discriminate, in particular the use of Saturday-night stay-over or minimum stay requirements, can be used effectively and their impacts can be quite significant. Indeed, the long-stay travelers appear to enjoy discounts of about 50% relative to short stay travelers.