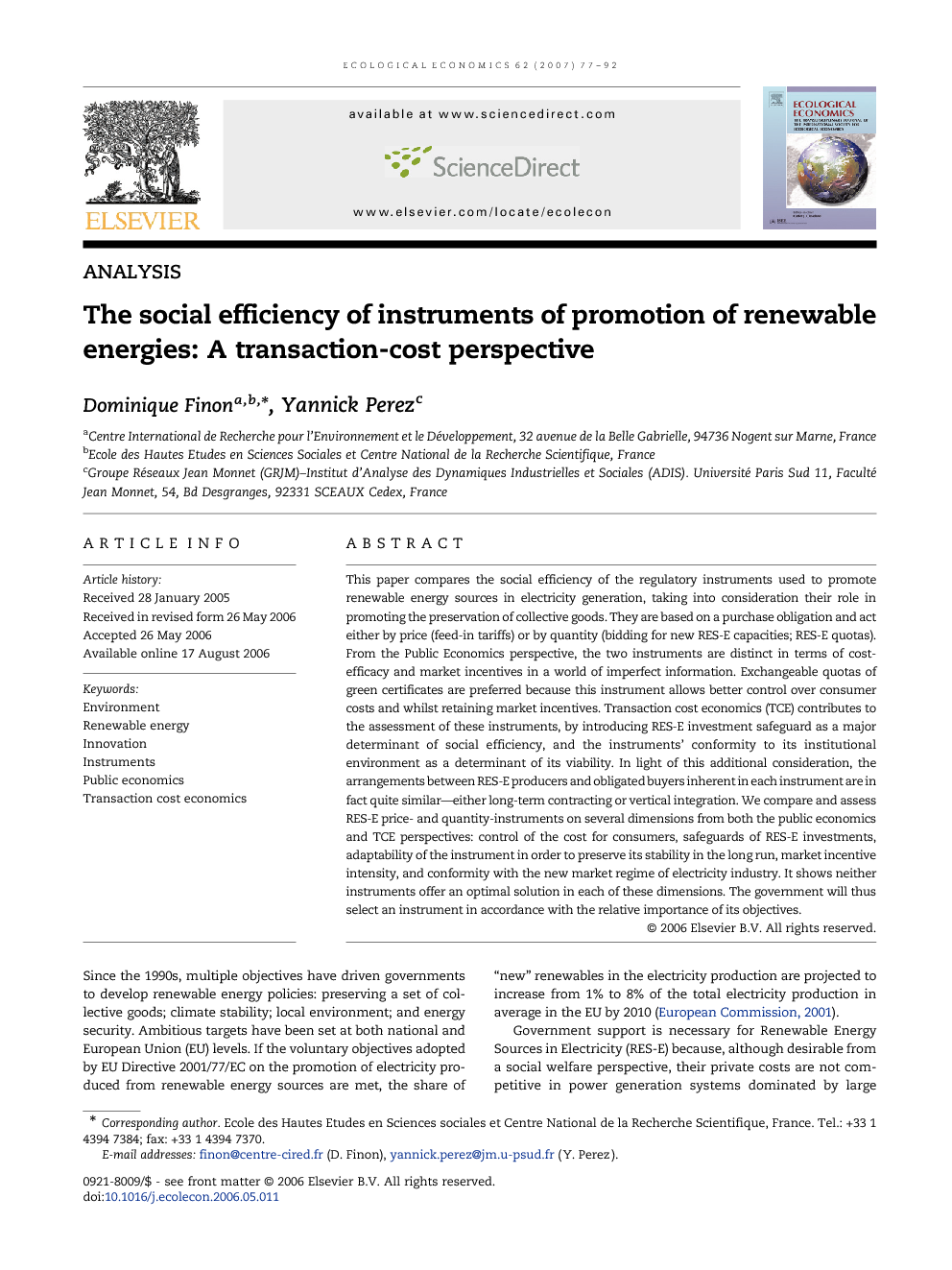 This paper compares the social efficiency of the regulatory instruments used to promote renewable energy sources in electricity generation, taking into consideration their role in promoting the preservation of collective goods. They are based on a purchase obligation and act either by price (feed-in tariffs) or by quantity (bidding for new RES-E capacities; RES-E quotas). From the Public Economics perspective, the two instruments are distinct in terms of cost-efficacy and market incentives in a world of imperfect information. Exchangeable quotas of green certificates are preferred because this instrument allows better control over consumer costs and whilst retaining market incentives. Transaction cost economics (TCE) contributes to the assessment of these instruments, by introducing RES-E investment safeguard as a major determinant of social efficiency, and the instruments' conformity to its institutional environment as a determinant of its viability. In light of this additional consideration, the arrangements between RES-E producers and obligated buyers inherent in each instrument are in fact quite similar—either long-term contracting or vertical integration. We compare and assess RES-E price- and quantity-instruments on several dimensions from both the public economics and TCE perspectives: control of the cost for consumers, safeguards of RES-E investments, adaptability of the instrument in order to preserve its stability in the long run, market incentive intensity, and conformity with the new market regime of electricity industry. It shows neither instruments offer an optimal solution in each of these dimensions. The government will thus select an instrument in accordance with the relative importance of its objectives.

The paper has compared the three RES-E instruments in several dimensions related to the TCE perspective: safeguards of RES-E investments, adaptability of the instrument in order to preserve its stability, market incentive intensity and con- formitywiththenewmarketregimeofelectricityindustry.The TCE approach focuses on the safeguarding of investment specific to a RES-E policy and its balance with incentive in- tensity for controlling the collective cost of the policy and the cost of consumers. This approach shows up other qualities of RES-EregulatorymechanismsthanthosehighlightedbyPublic Economics and recalled in the first part. Public economics approach focuses on collective cost control to determine the clear superiority of exchangeable quotas because of intensive- ness of market incentives and limitation of producers' rent. By focusing on the risks of expropriation of RES-E investors and in particular the regulatory risk, the TCE approach underlines importance of safeguards. Such safeguards must be obtained in two ways: through long-term contracting and credibility of regulation. In the first, there is a de facto convergence of the three instruments towards more hierarchical arrangements. It is intrinsic to the FIT governance structure and in a lesser extent to the bidding system; whereas in the EQ system which a priori is set to capture cost efficiency by markets, producers and obligated buyers are forced to seek long-term contracts or vertical integration ( Table 1 ). In a complementary way, conditions of a successful instru- ment vis-à-vis the regulatory risk include long-term govern- ment's commitment, foreseeability of the instrument and exante flexibility to capture decreasing RES-E cost and correct redistributive effects. Social efficiency must be sought by incompletenessoftheregulatory contract andex ante definition of rules of flexibility rather than in the high-powered market incentiveswhichinfacttendtocreatelargeriskstoinvest.Inthis respect, the FIT instrument is the most suited to adaptability. Moreover, if it is the combination of investment safeguards and the generosity of the support which determine the efficacy in terms of installation of RES-E plants, these two characters are not independent. The generosity of the support must not be abstractedfrom the incurring risksandtransaction cost. Indeed, an instrument must not be the source of excessive transaction costs for preparation of projects, installation and ex post adap- tation of the producers – buyers contracts, as shown by the dif- ficulties met through the experience with bidding instruments and EQ systems. Ifan instrument createsde facto an investment risk and transaction costs, the earnings of the investor – de- velopers should have to be higher than the cost-price of the equipment. In this respect, the bidding system with a tight cost cap and EQ instrument are quite unfavourable to the realisation of plants because of insufficient payments. Finally, in terms of market conformity with the electricity market regimes for which the EQ instrument is unquestion- ably the best, the differentiation between instruments is not so clear. Even if the FIT and bidding instruments appear to lack compatibility with the pure market model, adaptations of the instruments are possible in those of the electricity industries in which market reforms are imperfect and preserve territorial dominant positions. It appears to be sufficient to impose the purchase obligation on incumbents, before viewing to transfer the purchase obligation to a public agency. This paper shows that none of the three instruments offer an optimal solution in all dimens ions: safeguards of RES-E in- vestments, market incentive int ensity, and conformity with the market regime of electricity industry. As a consequence, a government will have to select an instrument and sustain it in the long run in accordance with the relative importance of its objectives.