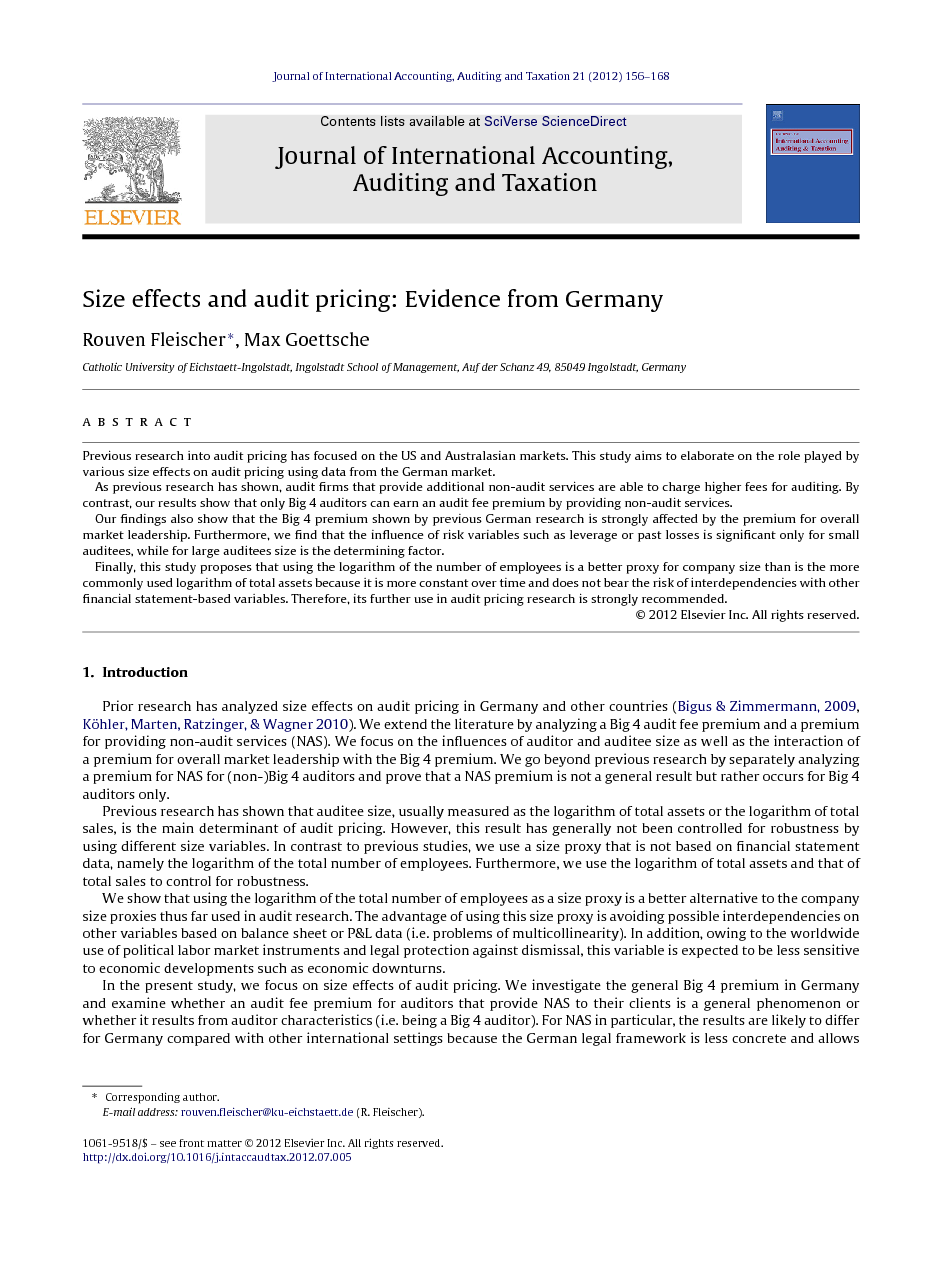 Previous research into audit pricing has focused on the US and Australasian markets. This study aims to elaborate on the role played by various size effects on audit pricing using data from the German market. As previous research has shown, audit firms that provide additional non-audit services are able to charge higher fees for auditing. By contrast, our results show that only Big 4 auditors can earn an audit fee premium by providing non-audit services. Our findings also show that the Big 4 premium shown by previous German research is strongly affected by the premium for overall market leadership. Furthermore, we find that the influence of risk variables such as leverage or past losses is significant only for small auditees, while for large auditees size is the determining factor. Finally, this study proposes that using the logarithm of the number of employees is a better proxy for company size than is the more commonly used logarithm of total assets because it is more constant over time and does not bear the risk of interdependencies with other financial statement-based variables. Therefore, its further use in audit pricing research is strongly recommended.

Prior research has analyzed size effects on audit pricing in Germany and other countries (Bigus & Zimmermann, 2009, Köhler, Marten, Ratzinger, & Wagner 2010). We extend the literature by analyzing a Big 4 audit fee premium and a premium for providing non-audit services (NAS). We focus on the influences of auditor and auditee size as well as the interaction of a premium for overall market leadership with the Big 4 premium. We go beyond previous research by separately analyzing a premium for NAS for (non-)Big 4 auditors and prove that a NAS premium is not a general result but rather occurs for Big 4 auditors only. Previous research has shown that auditee size, usually measured as the logarithm of total assets or the logarithm of total sales, is the main determinant of audit pricing. However, this result has generally not been controlled for robustness by using different size variables. In contrast to previous studies, we use a size proxy that is not based on financial statement data, namely the logarithm of the total number of employees. Furthermore, we use the logarithm of total assets and that of total sales to control for robustness. We show that using the logarithm of the total number of employees as a size proxy is a better alternative to the company size proxies thus far used in audit research. The advantage of using this size proxy is avoiding possible interdependencies on other variables based on balance sheet or P&L data (i.e. problems of multicollinearity). In addition, owing to the worldwide use of political labor market instruments and legal protection against dismissal, this variable is expected to be less sensitive to economic developments such as economic downturns. In the present study, we focus on size effects of audit pricing. We investigate the general Big 4 premium in Germany and examine whether an audit fee premium for auditors that provide NAS to their clients is a general phenomenon or whether it results from auditor characteristics (i.e. being a Big 4 auditor). For NAS in particular, the results are likely to differ for Germany compared with other international settings because the German legal framework is less concrete and allows auditors to provide a wider range of NAS. Therefore, NAS are generally supposed to play a more important role in audit pricing in Germany. The focus of prior global audit pricing research has been on two areas: how the pricing of audit services is affected by auditor size and by providing additional NAS to clients. Previous studies have shown that being defined as a Big 4 auditor (or formerly Big 8 or Big 6) has a positive effect on chargeable audit fees, the so-called Big 4 premium (Francis, 1984, Francis and Simon, 1987, Gul, 1999, Palmrose, 1986a and Simunic, 1980), but the degree of this Big 4 premium has been shown to differ. Simunic (1980) showed an audit fee premium for the Big 8 auditor that has the highest fees on average. In more recent studies, Bigus and Zimmermann (2009) and Köhler et al. (2010) provided the first evidence of a Big 4 audit fee premium in Germany. Our analyses go beyond these studies because we provide a closer analysis of a Big 4 premium and its interaction with auditors that provide NAS to their clients. We also conduct a closer analysis on the influence of the premium for overall market leadership on the Big 4 premium. Using a German data set, we confirm previous research findings on the existence of both a Big 4 premium and a premium for the provision of NAS by auditors. Furthermore, previous German research only analyzed the effects of the sum of NAS provided by an auditor on audit fees. By separately analyzing the fees for other attestation services, fees for tax consultancy and fees for other services, mandatorily published according to German commercial law, we prove that auditors earn a premium for providing NAS in any of these categories. Although we show a Big 4 and a NAS premium for both our complete data set and for subsets of large and small1 auditees, we find that audit pricing clearly differs between large and small auditees. We find that the audit pricing of small auditees is also affected by risk variables (i.e. leverage or past losses), whereas the audit pricing of large auditees is not significantly affected by these variables, but by their sizes only. Furthermore, we show that providing NAS results in a significant audit fee premium for Big 4 auditors only, not for non-Big 4 auditors providing NAS. By further investigating the Big 4 premium, we show that the market leader in our sample is able to obtain an audit fee premium not only compared with non-Big 4 auditors but also compared with the remaining Big 4 auditors. Thus, this finding indicates the existence of a market leader premium. This paper is organized as follows. Section 2 presents the literature overview and develops the research questions. In Section 3 the research design of this study is presented, including an overview of the data available for the German market and the model specification. The data analysis and results are found in Section 4. A summary of this study and the conclusion is then presented in the final section.

The results of this study confirm previous audit pricing research for the German market by showing an audit fee premium for Big 4 auditors and by finding that providing NAS to audit clients results in a premium. Because German regulations on NAS are less concrete than regulations in other countries and allow auditors to provide a wider range of NAS, NAS are generally supposed to play a more important role in audit pricing in a German setting. However, as we have shown, the NAS premium in Germany is not substantially different from other international settings. Furthermore, it is unsteady and differs along with auditee and auditor size, namely for Big 4 auditors. Our results also show that for large auditees, audit pricing is generally determined by size proxies alone, whereas for small auditees audit pricing is also determined by variables indicating audit risk. We find that a higher leverage and past losses result in higher audit fees for small companies. For large auditees, we show that these parameters have no statistically significant influence. In light of this finding, future audit pricing research should more closely analyze the differences in risk perception along with auditee size. In our opinion, risk factors such as leverage should be applied for any size of auditee. We also show that providing NAS to large auditees results in a higher audit fee premium than is the case for small auditees, which is in line with previous research showing that premiums for NAS may vary dependent on auditee size (Hay et al., 2006 and Palmrose, 1986b). We examined whether premiums for auditors that provide NAS to their audit clients are associated with auditor size. We find that providing NAS does not automatically result in an audit fee premium. We show that in the case of Big 4 auditors that provide NAS, an audit fee premium results, while for non-Big 4 auditors no statistically significant evidence of such a premium can be shown. Future audit pricing research should consider this finding when analyzing the influence of NAS in audit pricing. We examined whether the results concerning the Big 4 premium in Germany are influenced by a premium for overall market leadership. Our study shows that the audit fee premium is not homogeneous among Big 4 auditors. Although we find an audit fee premium for the group of Big 4 auditors that are not the market leader, we also show an even higher audit fee premium for the overall market leader in our sample. Regarding the huge impact of the market leadership premium on the described Big 4 premium, future research should generally control for interactions between a premium for Big 4 auditors and for market leadership. This study is not without limitations. First, when analyzing differences in the audit pricing of large and small firms restrictions in our data set do not allow to define large and small firms as the top and bottom quartiles of our data set. Rather we have to use the median of our size variable to define large and small firms. Still, our result on a Big 4 premium among large firms may be influenced by the small number of non-Big 4 observations in the group of large firm observations. Second, we hypothesize that auditors may be “locked in” with larger audit clients and that due to a longer customer relationship auditors may be able to provide more NAS. As our data set does not allow to control for mandate tenure, we cannot control for this hypothesis. Third, we assume that the high market leader premium, compared to the Big 4 premium, can be explained by more differentiated services but we cannot control for the nature of services offered. As shown by previous research as well as by our results, audit pricing is strongly influenced by auditee size. In this study, we show that non-financial statement-based data (i.e. the logarithm of the number of employees) is a better size proxy for audit pricing research. In comparison to the size variables used thus far, using the logarithm of the number of employees does not change the results achieved and minimizes the probability of interdependencies with other variables based on balance sheet or P&L data. Further, such a variable is less sensitive to economic developments because of the worldwide use of political labor market instruments. In European settings, and in Germany in particular, we expect even less sensitivity because legal protection against dismissal is more restrictive than it is in other international settings. To conclude, this study shows how the size of both auditee and auditor affects audit pricing and presents a better alternative to the commonly used size proxy for future audit pricing research.