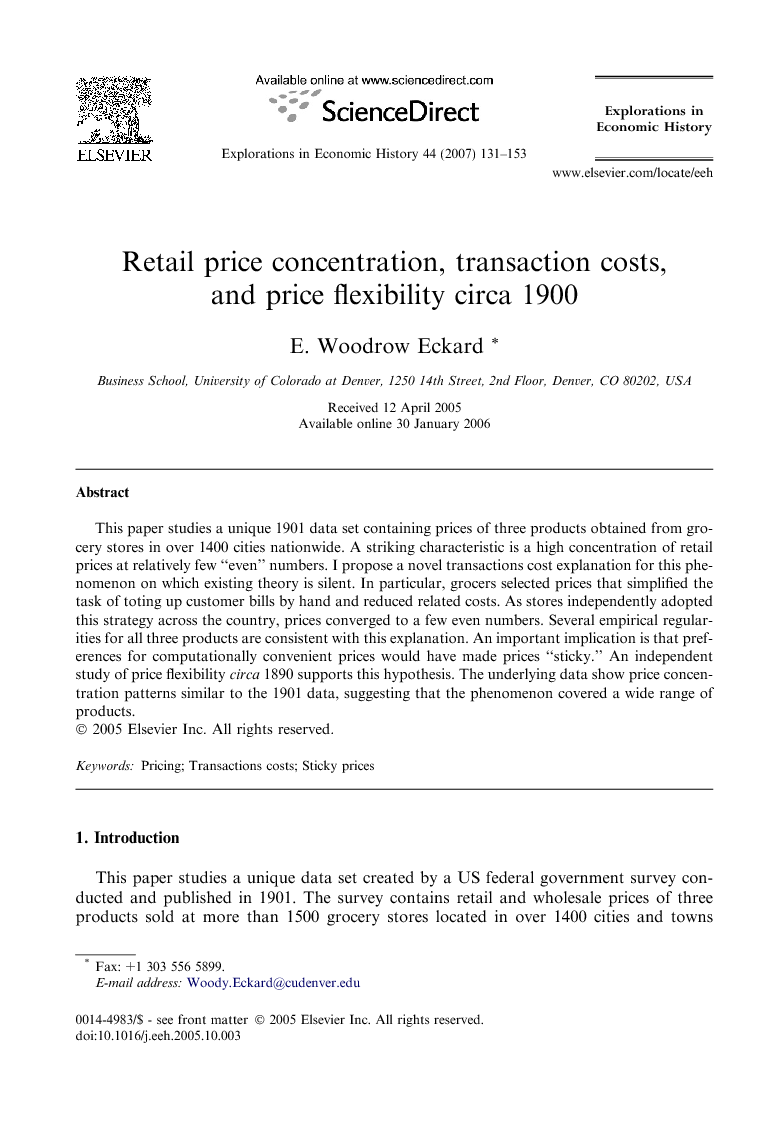 This paper studies a unique 1901 data set containing prices of three products obtained from grocery stores in over 1400 cities nationwide. A striking characteristic is a high concentration of retail prices at relatively few “even” numbers. I propose a novel transactions cost explanation for this phenomenon on which existing theory is silent. In particular, grocers selected prices that simplified the task of toting up customer bills by hand and reduced related costs. As stores independently adopted this strategy across the country, prices converged to a few even numbers. Several empirical regularities for all three products are consistent with this explanation. An important implication is that preferences for computationally convenient prices would have made prices “sticky.” An independent study of price flexibility circa 1890 supports this hypothesis. The underlying data show price concentration patterns similar to the 1901 data, suggesting that the phenomenon covered a wide range of products.

This paper studies a unique data set created by a US federal government survey conducted and published in 1901. The survey contains retail and wholesale prices of three products sold at more than 1500 grocery stores located in over 1400 cities and towns nationwide. A striking characteristic of the data is a high concentration of retail prices at relatively few “even” numbers. For one product, three prices account for 56% of stores (10, 12, and 15 cents), and for a second three prices account for 59% View the MathML source(6,612,and7cents). The most dramatic case involves only two prices accounting for 91% of stores (45 and 50 cents). I propose a transactions cost explanation for this phenomenon. In particular, since computing devices were still rare circa 1900, grocers selected even-number prices to simplify the task of toting up customer bills by hand and making change, and reduce related costs. As stores independently adopted this strategy across the country, prices converged to a few even numbers. Existing economic theory, such as the “law of one price,” predicts concentrated prices within markets. 1 Absent search costs, competition compels sellers to charge a single price (equal to their common supply cost); i.e., there should be zero dispersion or perfect concentration. The first point is that the argument applies to individual markets, i.e., it cannot explain high concentration across markets. A large number of localities throughout the country could have a large number of different prices (low concentration), even if only one price exists within each market (perfect concentration). Second, the theory says nothing about the particular “one price” that should obtain. For example, it says nothing about the relative frequency of markets that might converge to a price of View the MathML source638versus612, or View the MathML source1412versus15, or 49 versus 50 cents. It is these issues that motivate the present paper. Empirical regularities in the price distributions for all three products are consistent with economizing on computation-related transactions costs. For example, among prices that include fractions, “even” fractions are preferred (e.g., View the MathML source612cents). Moving from lower to higher prices, integers replace fractions, then nickel prices replace other integers. Also, the data indicate that even-numbered retail prices were not simply an artifact of adding even markups to even wholesale prices. Among other findings, profit margins are broadly comparable to similar modern products, and the percentage markups over wholesale prices and implied elasticities are consistent with profit maximization by retailers and the nature of the product (i.e., commodity or branded). Also, there is no evidence of demand-based “pricing points,” as apparently exist today. These findings may be the first evidence of a cost of changing price that existed prior to the introduction of computing devices and is not present in modern times. Retailers interested in maintaining even-numbered prices would be reluctant to alter them unless demand or supply (cost) changes were large enough to warrant a move to another even price. The upshot would be “sticky” prices characterized by a reduced sensitivity to fluctuating market conditions. 2 Such fluctuations therefore would have a greater impact on quantities produced and sold. If sufficiently widespread, the phenomenon would exacerbate the output and employment effects of economic downturns, making recessions of the era deeper and longer than otherwise. The implication that prices were less flexible a century ago compared to today is supported by Kackmeister (2005), whose early-period prices (1889–1891) show a pattern of concentration that closely parallels that of my 1901 data. Although containing many fewer prices per product, his sample includes many more products, suggesting that the phenomenon was common. To my knowledge, this is the first study to focus on retail pricing per se during the period prior to World War I. Previous work has viewed data on individual product prices as a means to other ends. For example, several papers covering this era use data from various sources to construct retail price indexes, with the ultimate goal of evaluating inter-temporal and inter-regional variations in the cost of living.3 The “administered price” controversy initiated by Gardiner Means in 1935 concerned price rigidity allegedly created by the monopoly power of large manufacturing corporations.4 While it spawned an empirical literature that includes my study period, these papers focus on inter-temporal comparisons and involve primarily industrial commodities rather than retail goods.5 The recent paper by Kackmeister (2005) uses retail prices circa 1890, but also focuses on inter-temporal comparisons to measure price flexibility. Finally, Eckard (2004) uses a subset of the present paper’s data to compare city-market price dispersion in 1901 and 2001 from the perspective of the above-mentioned law-of-one-price literature. The present paper proceeds as follows. Section 2 describes the 1901 survey and data that provide the main foundation for the present study. Sections 3 and 4 present the retail and wholesale price distributions and profit margins. Section 5 analyzes the evidence supporting the transactions cost interpretation, followed by a discussion of the price flexibility implications. Section 7 provides evidence that computing devices were most likely rare among grocers in 1901. The last section concludes.

A unique century-old US Industrial Commission survey yields retail transactions price data for three products sold at over one thousand grocery stores nation-wide. For all three products, retail prices are concentrated at a surprisingly few ‘‘even num- bers,’’ a phenomenon that cannot be explained by existing theory. While other explana- tions cannot be definitively ruled out, the price distributions and other empirical evidence are consistent with a prominent role for computation-related transactions costs. Specifically, retailers selected prices to economize on the costs of computing customer bills by hand. For example, integer prices were preferred to fractions, and nickel prices were preferred to other integers. The opportunity cost of pricing to economize on com-putation costs is the foregone profits of greater precision, and is proportionately less at higher prices. The 1901 data clearly show that the movement from fractional to integer to nickel prices is positively related to price magnitude. The relation is repeated and extended to quarter, 50 cents, and $1.00 concentration points in the 1889 Aldrich Report data that include higher prices and many more products. Also, 1901 wholesale prices, where computation costs are a much smaller proportion of the total transaction value, are much less concentrated than retail prices. The evidence indicates that even-numbered prices are not simply an artifact of adding even markups to even wholesale prices. The deviations from profit-maximizing prices implied by this theory are well within reported retail margins. The apparent preference for computationally convenient prices would have made prices circa 1900 more ‘‘sticky,’’ i.e., less responsive to changes in demand and supply (cost). Lower price flexibility in turn would have exacerbated output reactions to fluctuations in aggregate demand, possibly resulting in deeper and longer recessions. The sticky-price hypothesis is supported by an independent study whose early-period prices show concen- tration patterns quite similar to the 1901 data, and whose broader product coverage sug- gests that the phenomenon was common. Among other findings, the percentage markups over wholesale prices are consistent with profit maximization by retailers. Also, the reported retail margins and implied price elasticities are broadly comparable to modern products of a similar nature. Last, there is no evidence in these data of demand-based ‘‘pricing points’’ that apparently exist in mod- ern retail pricing.