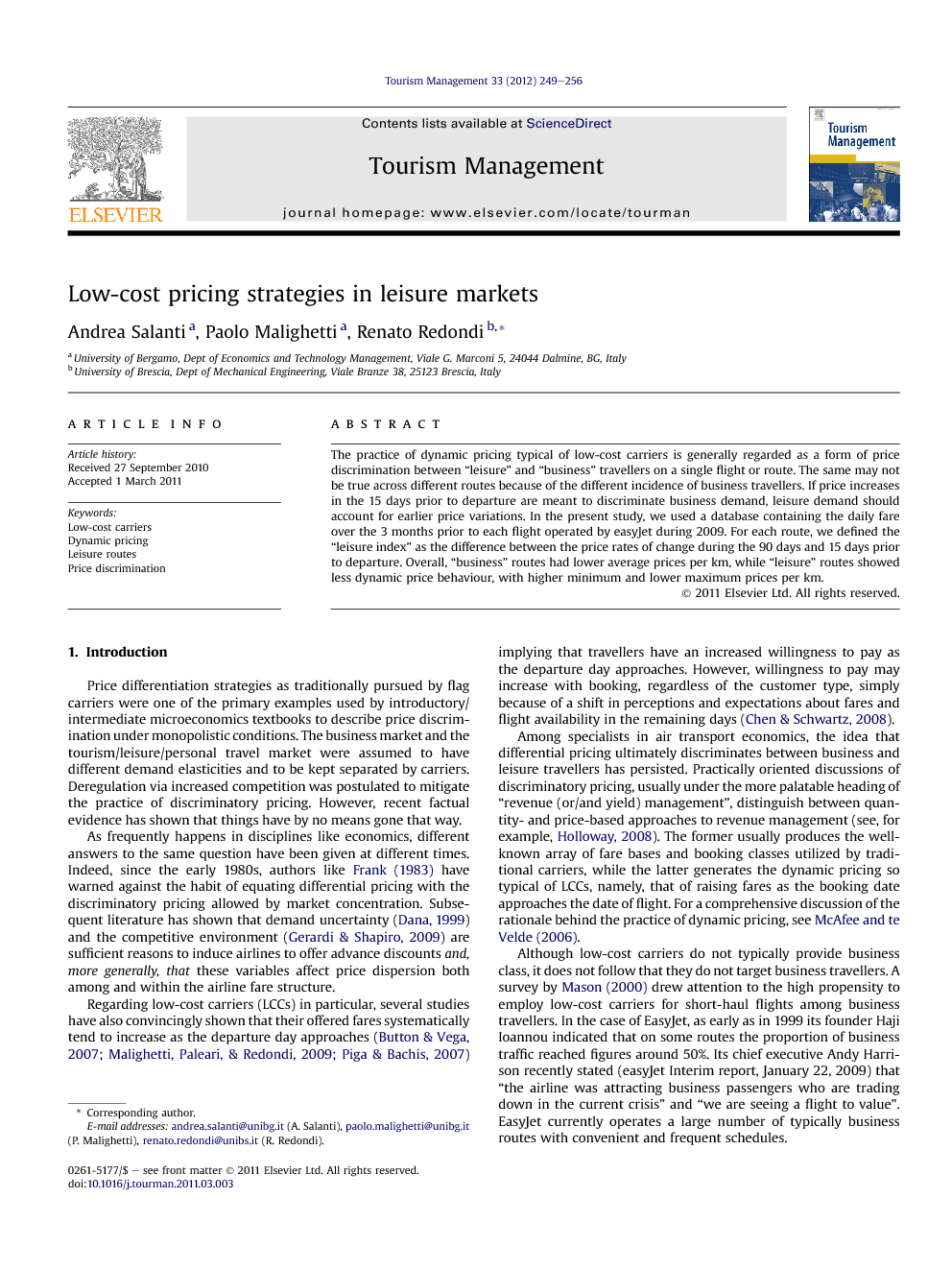 The practice of dynamic pricing typical of low-cost carriers is generally regarded as a form of price discrimination between “leisure” and “business” travellers on a single flight or route. The same may not be true across different routes because of the different incidence of business travellers. If price increases in the 15 days prior to departure are meant to discriminate business demand, leisure demand should account for earlier price variations. In the present study, we used a database containing the daily fare over the 3 months prior to each flight operated by easyJet during 2009. For each route, we defined the “leisure index” as the difference between the price rates of change during the 90 days and 15 days prior to departure. Overall, “business” routes had lower average prices per km, while “leisure” routes showed less dynamic price behaviour, with higher minimum and lower maximum prices per km.

As far as differences of revenue management between leisure and business routes are concerned, the above empirical results indicate that: i) leisure routes have higher average prices per km, and (ii) prices on leisure routes show a less dynamic behaviour than on business routes, with higher minimum and lower maximum prices per km. These findings are easily understood from the carrier’s perspective. Dynamic pricing seeks to approximate the high-fare (business) demand for each flight, keeping back an appropriate number of seats for the last days before departure. Because other seats are sold at lower prices in earlier periods, if a flight has a higher level of expected business demand, the carrier can afford to sell the other seats at lower fares. This explains why maximum prices for business flights reach a higher level and dynamic pricing activities appear to be more pronounced than for leisure flights. In the latter case, since the expected business demand is low or not existent, price dispersion for leisure passengers must be lower to allow carriers to reach the target revenue. We also find robust evidence of higher average fares on leisure routes, suggesting a much less obvious form of price discrimination between leisure and business routes. Our sensitivity analysis shows under what conditions the carrier’s revenues on leisure routes are higher than on business routes, and appears to confirm the robustness of our conclusions. However, it does not follow that the carrier could increase its profitability by offering only leisure routes. The two kinds of routes are often offered on a complementary basis in order to increase the aircraft turnover and utilization. The same aircraft could be employed in business routes earlier in the morning or later in the evening and in leisure routes during the central hours of the day. For the same reason, on a year basis, a specific aircraft could operate leisure routes during summer and business routes during winter. From a carrier perspective, the most relevant variable for pricing on leisure routes is the setting of the initial fare, three months before departure. If it is set to a too low level, the risk is that too many seats are sold at highly discounted prices and, as a consequence, flight revenue does not reach the break-even level. For business routes the most critical variable is the setting of the rate of increase in prices during the last days before departure. The carrier ability to discriminate business demand depends on it. In this case, the initial price could be set to lower levels since most of the revenue comes from the last days before departure. So, it is more probable to find highly discounted fares for advance bookings on business routes than on leisure routes. As a final point let us observe how these findings are intriguing from the perspective of leisure travellers. The best deals can be found on business routes, especially for advanced bookings. On average, it is cheaper to fly to large capital cities (typical destinations of business travellers) than to exotic islands in Greece or Egypt, and cheaper to fly during the week, earlier in the morning, or later in the evening. In other words, it pays to stick as close as possible to business travellers since they are taking a bigger share of the burden. In this respect, temporal price discrimination is not so different from traditional quantity discrimination.