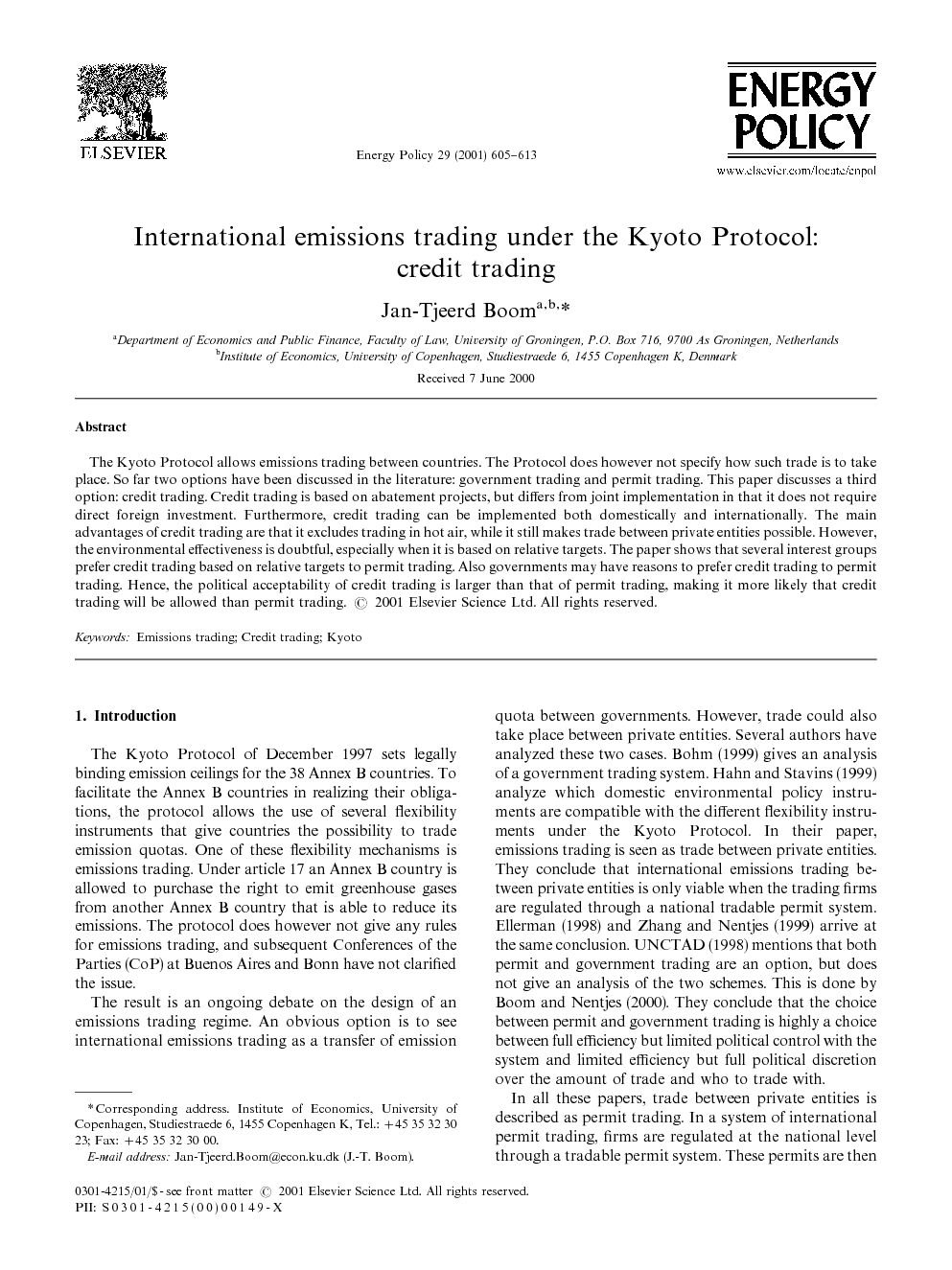 The Kyoto Protocol of December 1997 sets legally binding emission ceilings for the 38 Annex B countries. To facilitate the Annex B countries in realizing their obligations, the protocol allows the use of several flexibility instruments that give countries the possibility to trade emission quotas. One of these flexibility mechanisms is emissions trading. Under article 17 an Annex B country is allowed to purchase the right to emit greenhouse gases from another Annex B country that is able to reduce its emissions. The protocol does however not give any rules for emissions trading, and subsequent Conferences of the Parties (CoP) at Buenos Aires and Bonn have not clarified the issue. The result is an ongoing debate on the design of an emissions trading regime. An obvious option is to see international emissioning trads as a transfer of emission quota between governments. However, trade could also take place between private entities. Several authors have analyzed these two cases. Bohm (1999) gives an analysis of a government trading system. Hahn and Stavins (1999) analyze which domestic environmental policy instruments are compatible with the different flexibility instruments under the Kyoto Protocol. In their paper, emissions trading is seen as trade between private entities. They conclude that international emissions trading between private entities is only viable when the trading firms are regulated through a national tradable permit system. Ellerman (1998) and Zhang and Nentjes (1999) arrive at the same conclusion. UNCTAD (1998) mentions that both permit and government trading are an option, but does not give an analysis of the two schemes. This is done by Boom and Nentjes (2000). They conclude that the choice between permit and government trading is highly a choice between full efficiency but limited political control with the system and limited efficiency but full political discretion over the amount of trade and who to trade with. In all these papers, trade between private entities is described as permit trading. In a system of international permit trading, firms are regulated at the national level through a tradable permit system. These permits are then made tradable not only domestically, but also internationally. The advantages of such a system are clear. Nationally, a cap is put on total emissions, ensuring that the Kyoto obligations will be met. Because trade is conducted at the firm level, there will be many traders, ensuring that an efficient market will come about. Hence, an international permit trading system gives a very efficient method to realize a given level of abatement. However, there are also disadvantages connected to such a system. The main ones are that it limits the use of national instruments to tradable permits and it allows for the trade in hot air. This paper shows that besides permit and government trading, there is a third option: credit trading. With credit trading, trade takes place between private entities. However, it differs from permit trading in that the emission credits that are traded are based on abatement projects that have to be approved by an agency before trading can take place. This also means that every credit is backed by genuine emission reductions. These characteristics make that credit trading is different from both permit and government trading and might make it attractive to several interest groups.1 Although credit trading shares many characteristics with joint implementation, it is different from it because with credit trading, a firm invests in a project at one of its own plants to receive credits and to sell them on the market. With joint implementation, the funding of the project comes from another firm than that where the project is implemented. So far, credit trading has been treated solely as an international instrument. However, it can as well be used, and has been used, at the national level. In that case, the government regulates emission sources with a certain instrument, e.g. performance standards, emission ceilings, technical standards or taxes, and on top of that allows firms to trade emissions reductions from projects. It is exactly in this way the early emissions trading schemes in the US have functioned (see Svendsen, 1998; UNCTAD, 1998). In the following section an outline of a credit trading scheme is given, followed by an analysis of the advantages and disadvantages of such a system in Section 3. In Section 4 we discuss the political acceptability of the scheme by analyzing the preferences on some interest groups. Finally, in Section 5 some conclusions and policy recommendations are given.

There are several important advantages of an international credit trading scheme. First of all, it makes the trade in hot air impossible because credits have to be backed by genuine emission reductions. Therefore, environmental organizations support the instrument. Furthermore, trade is conducted between firms, which makes regular trades possible and enhances the flexibility and the cost efficiency of the system. Another major advantage is that credit trading is compatible with all national instruments. The latter two advantages are important for industry, which for these reasons also support credit trading. Disadvantages are that the scheme is not fully efficient, mainly because of the evaluation of every abatement project that is needed before credits can be issued. Furthermore, the preparation time needed to set up a credit-trading system is rather long. The evaluation of projects and the set-up of the system are to be done by the environmental bureaucracy. Since this involves a large amount of labor, the environmental bureaucracy also supports credit trading. A major problem with credit trading is that the overall environmental effectiveness of the instrument is doubtful. When credit trading is based on soft targets and not on an emission cap, the resulting total level of emissions becomes uncertain, and may well lie above the level intended by the policy maker. Furthermore, it may keep inefficient firms in the market. Hence, both from an economic and from an environmental point of view, credit trading seems to be the wrong road to take. Once chosen it will be hard to revert to a permit trading system which is more efficient and also is environmentally more effective than credit trading based on performance standards. The analysis above does however suggest that political acceptability works in favor of credit trading in combination with relative targets. Credit trading is favored by most interest groups. Furthermore, policy often evolves incrementally, which also, at least in Europe, points to credit trading. Finally, the hesitation by the US to ratify the Kyoto Protocol may make other countries cautious to introduce hard ceilings on the emissions of domestic emission sources. This would then be another reason for using credit trading.