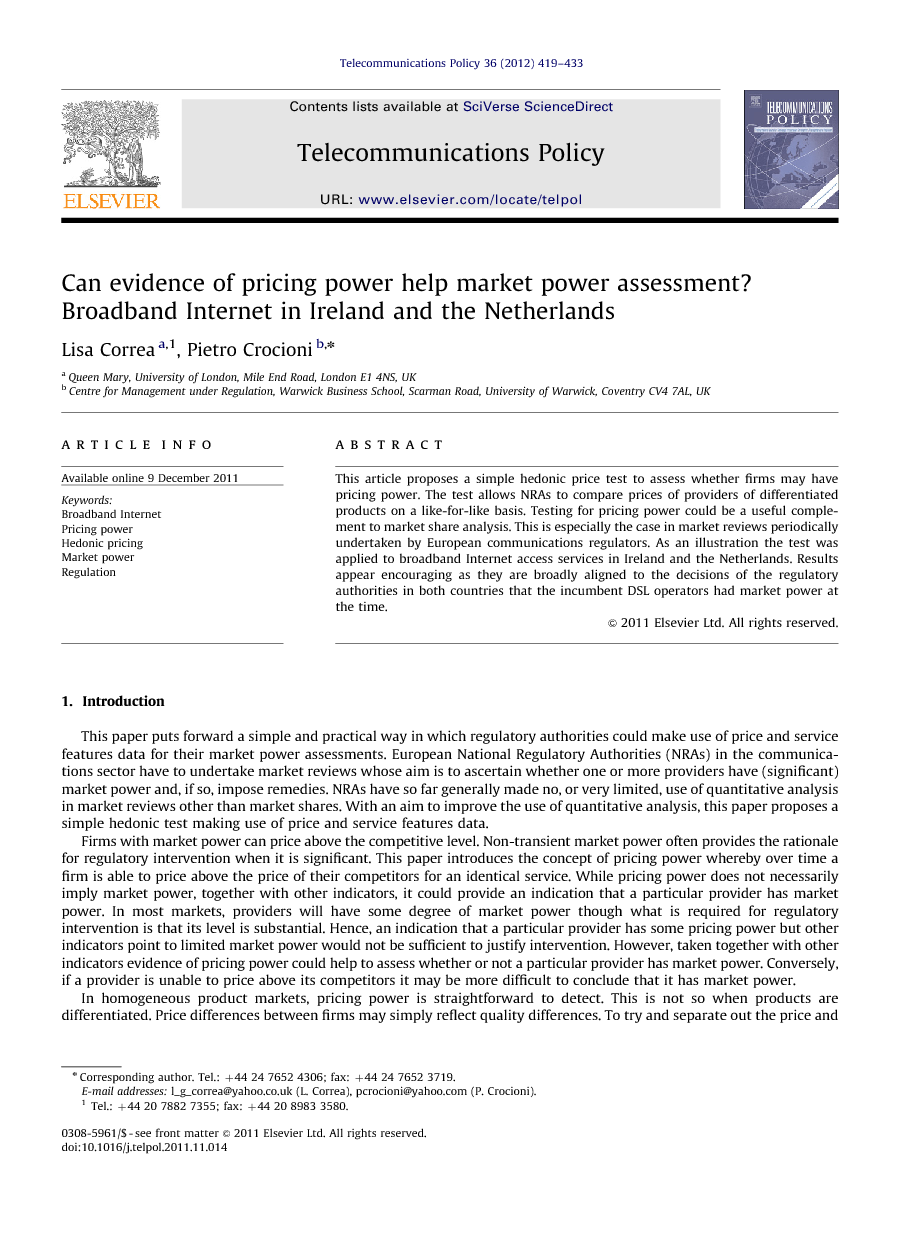 This article proposes a simple hedonic price test to assess whether firms may have pricing power. The test allows NRAs to compare prices of providers of differentiated products on a like-for-like basis. Testing for pricing power could be a useful complement to market share analysis. This is especially the case in market reviews periodically undertaken by European communications regulators. As an illustration the test was applied to broadband Internet access services in Ireland and the Netherlands. Results appear encouraging as they are broadly aligned to the decisions of the regulatory authorities in both countries that the incumbent DSL operators had market power at the time.

This paper puts forward a simple and practical way in which regulatory authorities could make use of price and service features data for their market power assessments. European National Regulatory Authorities (NRAs) in the communications sector have to undertake market reviews whose aim is to ascertain whether one or more providers have (significant) market power and, if so, impose remedies. NRAs have so far generally made no, or very limited, use of quantitative analysis in market reviews other than market shares. With an aim to improve the use of quantitative analysis, this paper proposes a simple hedonic test making use of price and service features data. Firms with market power can price above the competitive level. Non-transient market power often provides the rationale for regulatory intervention when it is significant. This paper introduces the concept of pricing power whereby over time a firm is able to price above the price of their competitors for an identical service. While pricing power does not necessarily imply market power, together with other indicators, it could provide an indication that a particular provider has market power. In most markets, providers will have some degree of market power though what is required for regulatory intervention is that its level is substantial. Hence, an indication that a particular provider has some pricing power but other indicators point to limited market power would not be sufficient to justify intervention. However, taken together with other indicators evidence of pricing power could help to assess whether or not a particular provider has market power. Conversely, if a provider is unable to price above its competitors it may be more difficult to conclude that it has market power. In homogeneous product markets, pricing power is straightforward to detect. This is not so when products are differentiated. Price differences between firms may simply reflect quality differences. To try and separate out the price and quality differences, this paper proposes a simple hedonic estimation procedure that allows for a price comparison on a like-for-like basis by adjusting for differences in product quality. A firm dummy variable is introduced for the firm(s) that may be the best candidate to have market power. If this turns out to be positive it might indicate that the firm(s) have some degree of pricing power that goes beyond simple differences in product features. The examples of fixed broadband Internet access services in the Netherlands and Ireland are used to illustrate how the test may work. Broadband Internet services are differentiated along many different features and provide a useful example to test the concept and methodology. The article is organized as follows: • Section 2 briefly describes the process under which European NRAs assess (significant) market power. • Section 3 briefly introduces the concepts of market and pricing power, how they are related and their measurement. • Section 4 describes the test. • Section 5 applies the test to the market for fixed broadband in the Netherlands and Ireland. • Section 6 concludes.

This article has proposed a simple test for pricing power, which allows NRAs to test whether on a like-for-like basis some providers price above their competitors. This test could be a useful complement when authorities need to assess whether specific firms have market power in the provision of differentiated services. Other techniques can also play an important role, but either they are simplistic – that is market share analysis – are subject to a high degree of error – that is q-ratios, profitability analysis, or international benchmarking – or are data and computationally demanding – that is residual demand analysis. The test was applied to broadband Internet in Ireland and the Netherlands to illustrate its possible contribution. Although some providers of these services were at the time subject to some access regulation, the test should be applicable also in these cases as long as results are interpreted within the correct framework. This is an important consideration as often market power assessment has to take place in contexts where NRAs have already attempted to constrain the market power of some firms. Results suggest that DSL providers in both countries have some degree of pricing power, although results are clearer for Ireland than for the Netherlands. This should perhaps not be surprising given that the extent of network competition is considerably stronger in the Netherlands than in Ireland. This conforms to the NRAs' conclusion that DSL incumbents have market power in both countries. Whilst it was not the purpose of the paper to prove the NRAs' analysis right or wrong, it is nonetheless encouraging that the analysis is broadly in line with the more traditional assessment made by them. Whilst the NRAs' analysis is mainly based on market shares and a qualitative analysis, this is done repeatedly over time while the pricing power illustration was just undertaken at a particular point in time. Further this analysis showed that there were also differences, especially in the Netherlands, where there are three areas where the independent cable operators competed with KPN. This is an interesting result because while the assessment at a national level was aligned to the analysis of the Dutch NRA, the assessment could differ depending on the sub-national area being considered. This may suggest, therefore, that the proposed test could be a useful complement to the traditional analysis that was undertaken by the NRAs. Although this is an encouraging result, further research in the area may, however, be needed due to the limitations of this illustration. In carrying out the pricing power test, published tariffs were used and an index taking account of discounts that were available at the time was constructed. One possible concern about using tariff data instead of actual sales data is that it is not known which of these tariffs on offer were actually bought by consumers. In other words, some tariffs may be bought by many consumers, while others may be purchased only by a few consumers. Thus, it is possible that considering existing tariffs (at one point in time) may give too much weight to tariffs that consumers do not choose. It is also plausible that the time dimension of offers is important in that tariffs will first be launched (often on an experimental basis), then remain available for a while and finally disappear, if unsuccessful. In addition the illustration provided has considered the situation at only one point in time. Should NRAs use this test it may be appropriate to repeat the exercise at different points in time in order to ensure that pricing power is not-transient. NRAs could also gather further information on take-up of different tariffs to better understand the weight that some tariffs may have. The illustration relied on the available data relating to late 2007. This was the last date where the Irish and Dutch broadband markets were unaffected by tight wholesale regulation, which could be expected to have had an impact on relative retail prices. Hence, more recent data could potentially have been distorted by regulation. On the other hand, earlier data was unavailable. In addition, the illustrative cases considered did not lend themselves to panel data estimation, as broadband offers change their name very frequently or are only offered for short periods of time. For example, in the Netherlands at the time of the analysis, KPN offered 11 broadband packages. However, in July 2011, only 9 packages were offered by KPN and with the exception of 4 packages with largely similar names, it is not clear what would be the 2011 equivalent of the 2007 packages. A similar issue would arise with the packages of the other providers in the sample. Furthermore, given the fast-moving nature of communications, it is also likely that the range of providers would have changed over the years. For example, in the Netherlands at the time of the analysis, there were 27 different providers. However, in July 2011, only 11 providers from 2007 could still be identified. This suggests that 16 providers from 2007 are no longer operating and there were an additional 8 new providers that did not exist in 2007. In summary, given the changing nature of the packages and providers over time, running the proposed test using panel data would not have been feasible. However, this may well be possible and advisable in other cases. The purpose of this paper was to provide an illustration of a pricing power test that may be a useful complementary tool for European NRAs for the purposes of SMP assessment. It was not the purpose of the paper to provide a definitive or thorough assessment of the Dutch or Irish situation. Notwithstanding, should an NRA consider applying this test, then it should do so at different points in time (either via running discrete cross-sectional data at different points in time or, if appropriate, via panel data analysis) in order to ensure that any finding of pricing power is non-transient.