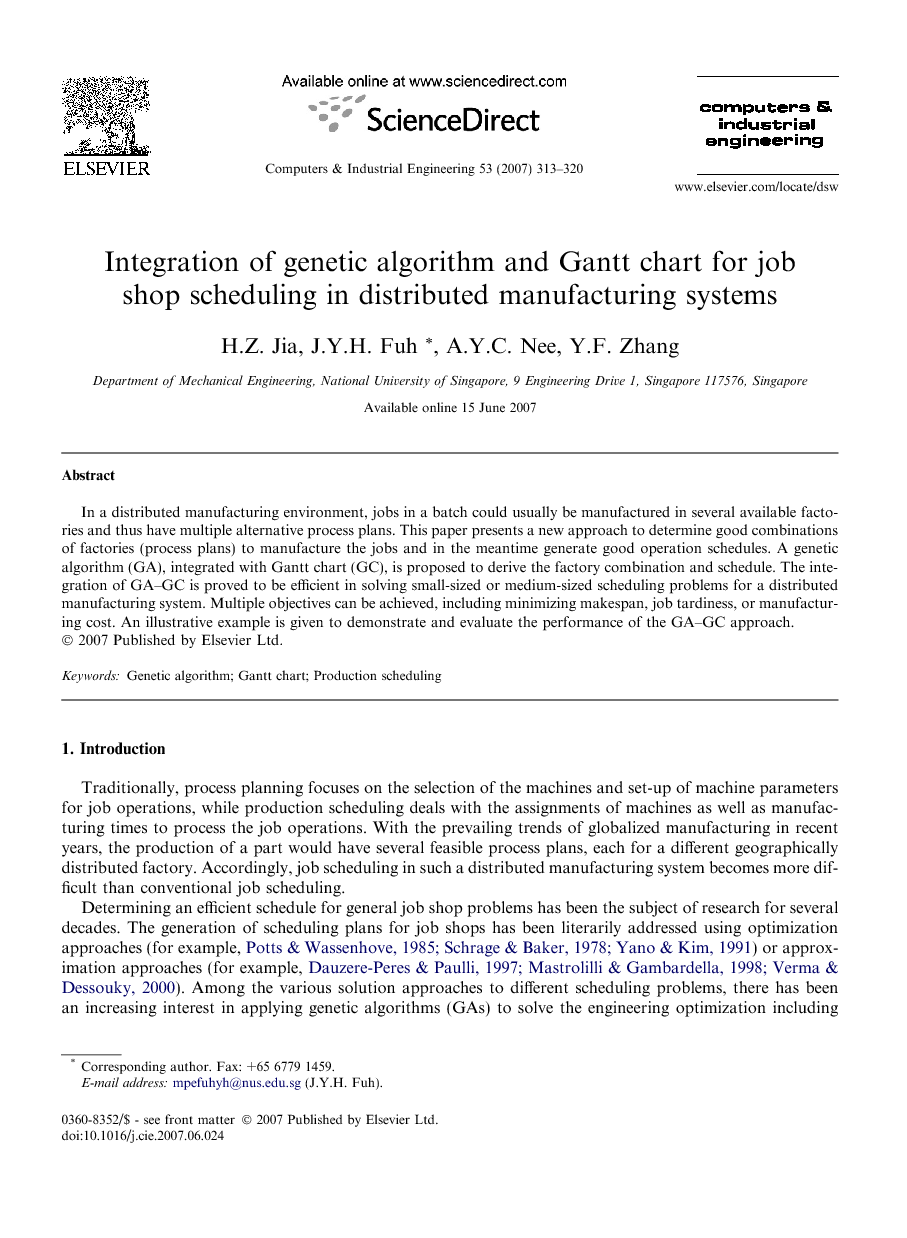 In a distributed manufacturing environment, jobs in a batch could usually be manufactured in several available factories and thus have multiple alternative process plans. This paper presents a new approach to determine good combinations of factories (process plans) to manufacture the jobs and in the meantime generate good operation schedules. A genetic algorithm (GA), integrated with Gantt chart (GC), is proposed to derive the factory combination and schedule. The integration of GA–GC is proved to be efficient in solving small-sized or medium-sized scheduling problems for a distributed manufacturing system. Multiple objectives can be achieved, including minimizing makespan, job tardiness, or manufacturing cost. An illustrative example is given to demonstrate and evaluate the performance of the GA–GC approach.

Traditionally, process planning focuses on the selection of the machines and set-up of machine parameters for job operations, while production scheduling deals with the assignments of machines as well as manufacturing times to process the job operations. With the prevailing trends of globalized manufacturing in recent years, the production of a part would have several feasible process plans, each for a different geographically distributed factory. Accordingly, job scheduling in such a distributed manufacturing system becomes more difficult than conventional job scheduling. Determining an efficient schedule for general job shop problems has been the subject of research for several decades. The generation of scheduling plans for job shops has been literarily addressed using optimization approaches (for example, Potts and Wassenhove, 1985, Schrage and Baker, 1978 and Yano and Kim, 1991) or approximation approaches (for example, Dauzere-Peres and Paulli, 1997, Mastrolilli and Gambardella, 1998 and Verma and Dessouky, 2000). Among the various solution approaches to different scheduling problems, there has been an increasing interest in applying genetic algorithms (GAs) to solve the engineering optimization including manufacturing scheduling (for example, Fang et al., 1993, Hou et al., 1994, Zalzala and Fleming, 1997, Park et al., 2003 and Srikanth and Barkha, 2004). Frequently, genetic algorithms are able to outperform many optimization or approximation approaches. When dealing with the scheduling problem in a distributed manufacturing system, in which one job could be manufactured in several available factories, and thus have multiple alternative process plans, the commonly used genetic algorithms appear not flexible enough to choose a good factory (process plan) combination and in the meantime give good job processing schedule. Considering the above aspects, this paper addresses an innovative GA, which applies crossover operator once and mutation operator twice to simultaneously improve the factory selections and job sequence selections. When integrated with Gantt chart (GC), the proposed genetic algorithm could generate good scheduling results with different objectives including makespan minimization, cost minimization, etc. in a reasonable computational time. Jia, Nee, Fuh, and Zhang (2003) proposed a modified GA to solve the job shop scheduling problems in a distributed manufacturing environment. The GA developed in this paper is an extension of the pervious work and it uses the integration of the GA with the GC in order to solve the small-sized or medium-sized scheduling problems in an more efficient and effective manner. The rest of the paper is organized as follows. In Section 2, we introduce the characteristics of a general distributed manufacturing system. In Section 3, the proposed GA is described in detail. Moreover, the integration of the GA and the GC is presented. Section 4 gives an illustrative example to demonstrate the use of the proposed GA in solving the scheduling problems for distributed manufacturing systems. Finally, we give conclusions in Section 5.

Due to the trend of globalized job outsourcing, job scheduling in a distributed manufacturing environment has become much more complicated than its traditional counterpart. The challenges faced by the scheduling in a distributed manufacturing environment require the job scheduler to not only sequence the job operations in an optimal way, but also select the best factory combinations to manufacture the jobs. In this paper, a modified GA, integrated with GC, is proposed and implemented for dealing with the newly emerged distributed scheduling problems. The information of the selected factories for the jobs and the job operations are encoded, respectively, and then combined to form the genes. The mixture of all the jobs’ genes makes up a chromosome that represents a feasible schedule for the distributed scheduling problem, including the sub-schedules for all the available factories. “Once” gene crossover and “twice” gene mutation are employed, respectively, in an attempt to change the operations’ processing sequence and the selected factories for the jobs. The GC is applied to efficiently and effectively translate the chromosomes into feasible schedules. Experimental results show that the application of the GC is able to facilitate the chromosome evaluation procedures and thus improve the computational performance of the proposed GA.