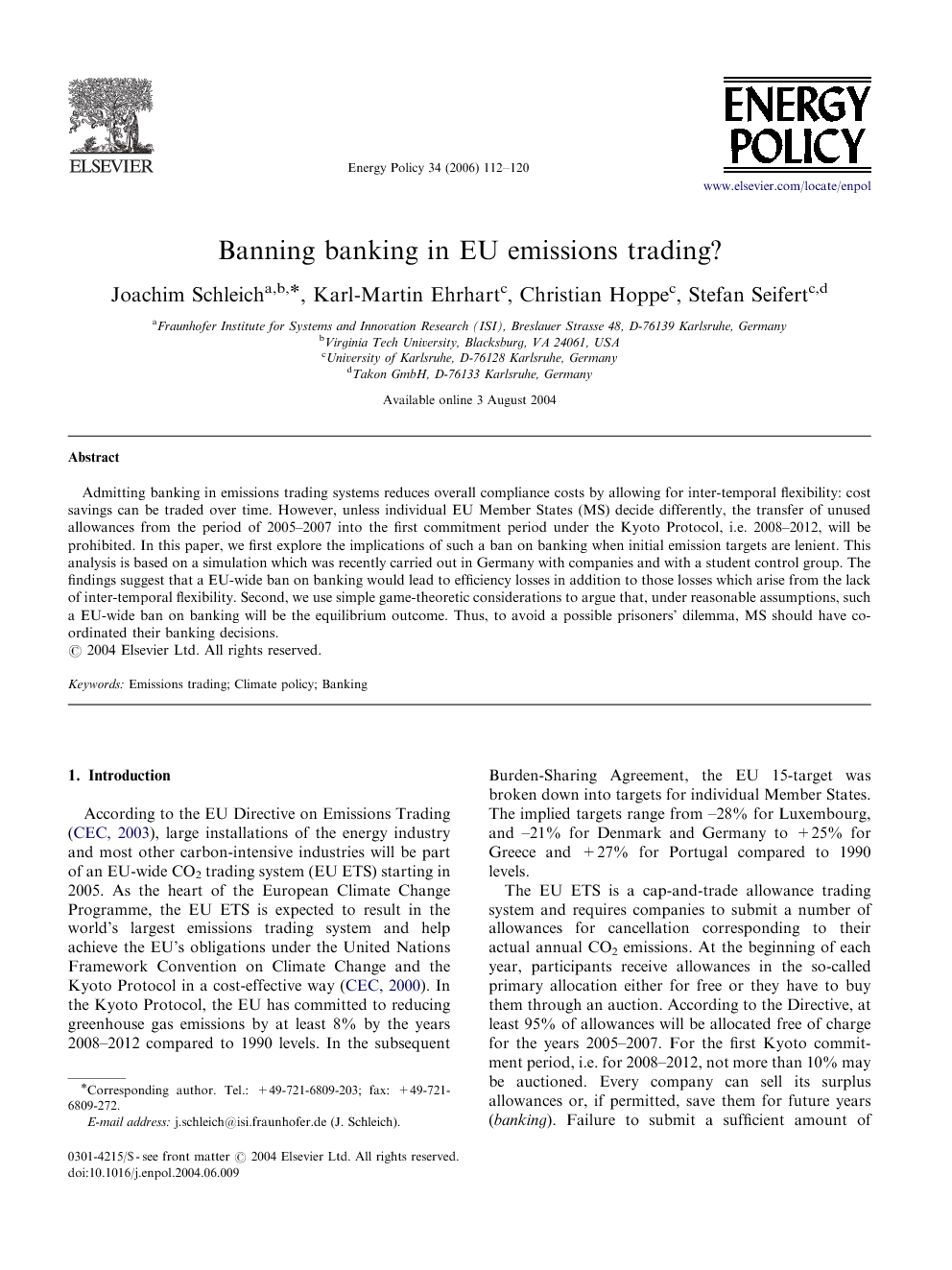 Admitting banking in emissions trading systems reduces overall compliance costs by allowing for inter-temporal flexibility: cost savings can be traded over time. However, unless individual EU Member States (MS) decide differently, the transfer of unused allowances from the period of 2005–2007 into the first commitment period under the Kyoto Protocol, i.e. 2008–2012, will be prohibited. In this paper, we first explore the implications of such a ban on banking when initial emission targets are lenient. This analysis is based on a simulation which was recently carried out in Germany with companies and with a student control group. The findings suggest that a EU-wide ban on banking would lead to efficiency losses in addition to those losses which arise from the lack of inter-temporal flexibility. Second, we use simple game-theoretic considerations to argue that, under reasonable assumptions, such a EU-wide ban on banking will be the equilibrium outcome. Thus, to avoid a possible prisoners’ dilemma, MS should have co-ordinated their banking decisions.

According to the EU Directive on Emissions Trading (CEC, 2003), large installations of the energy industry and most other carbon-intensive industries will be part of an EU-wide CO2 trading system (EU ETS) starting in 2005. As the heart of the European Climate Change Programme, the EU ETS is expected to result in the world's largest emissions trading system and help achieve the EU's obligations under the United Nations Framework Convention on Climate Change and the Kyoto Protocol in a cost-effective way (CEC, 2000). In the Kyoto Protocol, the EU has committed to reducing greenhouse gas emissions by at least 8% by the years 2008–2012 compared to 1990 levels. In the subsequent Burden-Sharing Agreement, the EU 15-target was broken down into targets for individual Member States. The implied targets range from –28% for Luxembourg, and –21% for Denmark and Germany to +25% for Greece and +27% for Portugal compared to 1990 levels. The EU ETS is a cap-and-trade allowance trading system and requires companies to submit a number of allowances for cancellation corresponding to their actual annual CO2 emissions. At the beginning of each year, participants receive allowances in the so-called primary allocation either for free or they have to buy them through an auction. According to the Directive, at least 95% of allowances will be allocated free of charge for the years 2005–2007. For the first Kyoto commitment period, i.e. for 2008–2012, not more than 10% may be auctioned. Every company can sell its surplus allowances or, if permitted, save them for future years (banking). Failure to submit a sufficient amount of allowances results in severe sanction payments and, in addition, companies have to surrender the missing allowances in the following year. From an economic point of view, emissions trading is expected to achieve efficiency gains in reaching the emissions target: companies which can abate their emissions at low cost have an incentive to do this to an increasing extent, since they can sell their surplus allowances at a profit to companies with high abatement costs. Since abatement measures will be realised where they are cheapest, environmental targets can—under ideal conditions—be met at minimum costs. This property is also called static efficiency property. Clearly, “abatement-cost heterogeneity is a fundamental determinant of the potential cost-savings associated with market-based policy instruments” ( Newell and Stavins, 2003, p. 44). Since participants in the EU ETS not only include large power producers but also refineries, or producers of cement, lime, steel, or paper, these potential cost-savings are expected to be high for the EU ETS. The idea to use market-based allowance trading goes back to Dales (1968) and Montgomery (1972). So far, allowance trading has primarily been applied in the US, where it has become a key policy instrument to address air quality problems as well as nutrient pollution in water bodies at federal and state level. More specifically, cap-and-trade programs for air quality include (i) the trading of NOx and SOx in the Regional Clean Air Incentives Market (RECLAIM) program in the Los Angeles area from 1994 on; (ii) the SO2 allowance trading under the Acid Rain Program for fossil-based power plants in the US which was created by the 1990 Clean Air Act amendments and started in 1995; and (iii) the more recent NOx trading scheme under the North-eastern Ozone Transport Commission Budget Program which began in 1999 (see Ellerman et al., 2003). Estimated cost savings for the Acid Rain Program, which is the most well-known and most intensively-studied trading system, range around 50% compared to command-and-control regulation ( Ellerman et al., 2000; Carlson et al., 2000). In most existing emissions trading programs, banking, i.e. the transfer of unused allowances into future years, has been permitted (Boemare and Quirion, 2002). Theoretical and empirical analyses from existing programs suggest that banking (and borrowing) reduces overall compliance costs by allowing inter-temporal flexibility: cost savings can be traded over time (Kling and Rubin, 1997; Tietenberg, 1999; Ellerman et al., 2003; Ellerman, 2002; Ellerman and Montero, 2002; Akhurst et al., 2003). Likewise, since it provides a safety cushion for unexpected high demand in the future, banking tends to dampen price fluctuations. In this paper, we explore the implications of a potential ban on banking from the first commitment period to the second commitment period in the EU ETS when initial emission targets are lenient. The analysis is based on a simulation game with a company group and a student control group which was recently carried out in Germany (Schleich et al., 2002). The results of the simulation suggest that a ban on banking in the EU ETS would be a major source of inefficiency and may prevent cost savings potentials from being realised. In addition, based on simple game theoretic considerations, we argue that—unless MS co-ordinate their actions—the outcome is likely to be an EU-wide ban on banking from 2007 to 2008. This prediction differs from the findings of a recent survey by Mullins and Karas (2003) according to which “individual countries seem likely to take different approaches to banking” (Mullins and Karas, 2003, p. 25). The UK, however, which was the first MS to publish its Draft National Allocation Plan (Department for Environment Food and Rural Affairs (DEFRA), 2004) does not allow for banking and may have sent a signal to other MS. In fact, a first analysis of the National Allocation Plans which were submitted to the Commission or which were available as draft versions in May 2004 concludes that most, possibly all, MS will actually prohibit banking from 2007 to 2008 (Betz et al., 2004). The remainder of the paper is organised as follows. In Section 2, we discuss possible banking procedures in the EU ETS and the stringency of the targets in the first commitment period. In Section 3, the design of the emissions trading simulation is described. Results of the simulation game are presented in Section 4. Section 5 offers policy implications which arise from the simulation. In Section 6, we model the banking decision as a normal form game and explore the equilibrium outcome. Conclusions are provided in Section 7.

Admitting banking in emissions trading systems reduces overall compliance costs by allowing for inter-temporal flexibility because cost savings can be traded over time. However, unless individual EU Member States (MS) decide differently, transferring unused allowances from the period of 2005–2007 into the first commitment period under the Kyoto Protocol, i.e. 2008–2012, will be prohibited in the EU ETS. Results of a simulation game conducted with actual company participants and with a student control group suggest that such a ban on banking combined with a generous allocation at the beginning of the EU emissions trading system result in inefficient abatement choices and overall costs which are well above the theoretical optimum. In particular, efficiency losses accrue in addition to those losses which arise from the lack of inter-temporal flexibility. In addition, based on simple game-theoretic considerations we argue that, under reasonable assumptions, an EU-wide ban on banking would be the equilibrium outcome. This conjecture, together with the assumption that the initial allocation in the EU ETS will be generous, is supported by an analysis of the National Allocation Plans (Betz et al., 2004). In order to avoid such a possible prisoners’ dilemma, MS may have been better off if they had co-ordinated their banking decisions. In the actual EU ETS there are various mechanisms in place which prevent a price bubble after a ban on banking which was observed in SET UP. First, according to the so-called “Linking Directive”, companies will be able to use relatively low-cost credits from project-based mechanisms (Clean Development Mechanism) as early as 2005. Thus, if there is sufficient supply of these relatively low-cost credits, their price can be expected to set an upper limit for EU allowance prices. Second, in SET UP the set of available measures was, for technical reasons, assumed to be fixed. However, if there is increasing scarcity in the market because emission targets become tighter and because the potential for existing measures becomes exploited, prices for allowances will rise. In this case there will be an increasing incentive for companies to develop and invest in new abatement measures which will give rise to price-induced technological progress as described by Hicks (1932). Finally, as Ehrhart et al. (2004) argue in the context of the potential ban on banking in the EU ETS, if forward markets exist or if part of the allowances are auctioned off prior to the start of the periods, reliable price signals for the future scarcity of allowances may be generated which would lead to lower overall abatement costs. However, in the actual EU ETS these mechanisms may not be readily available: (i) the EU ETS only allows for a small portion of allowances to be auctioned off by MS, and (ii) a generous allocation of allowances may lead to a thin spot market which may only prevent forward and other derivative markets from developing sufficiently enough to allow for robust price signals and hedging.