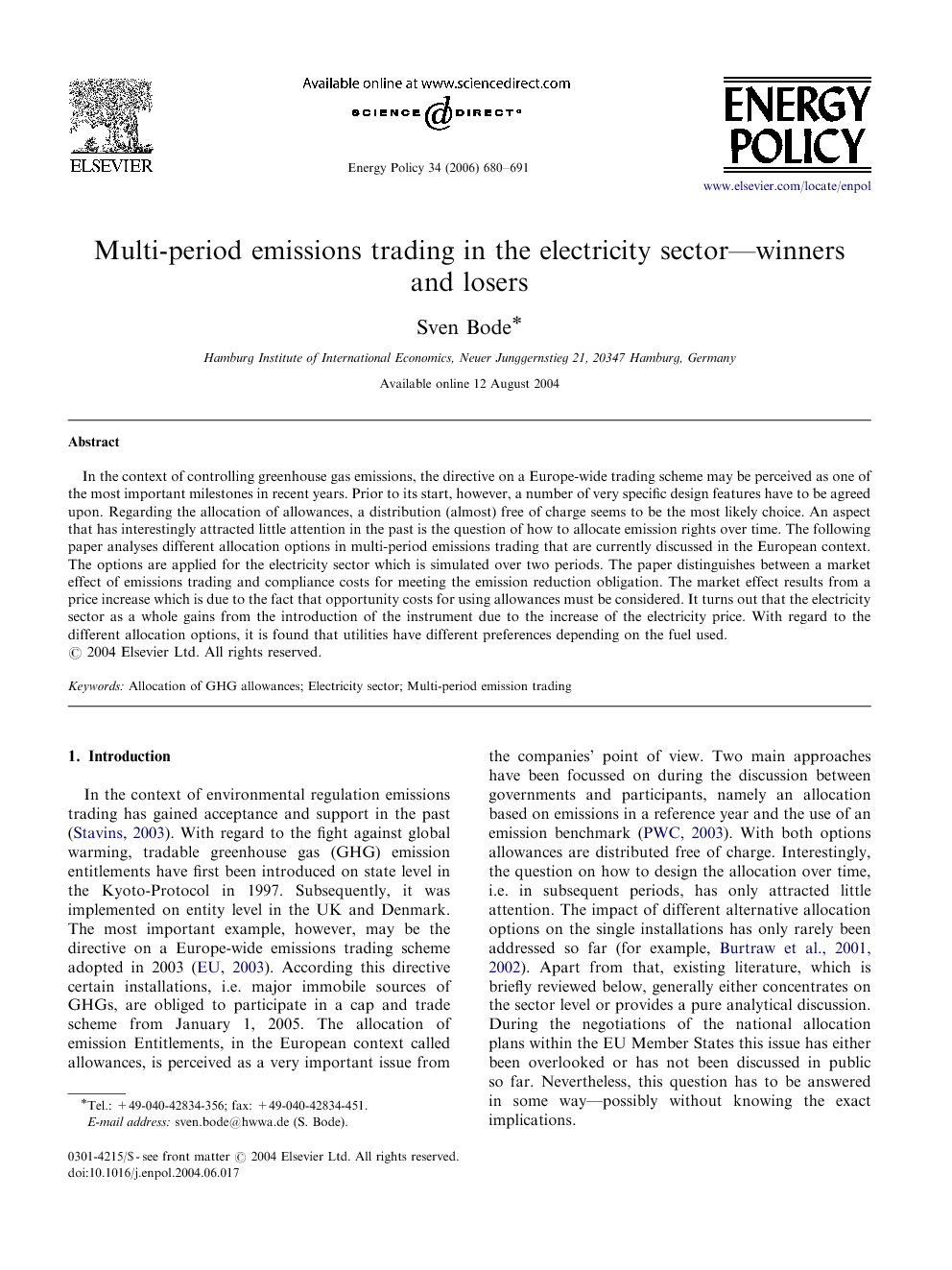 In the context of controlling greenhouse gas emissions, the directive on a Europe-wide trading scheme may be perceived as one of the most important milestones in recent years. Prior to its start, however, a number of very specific design features have to be agreed upon. Regarding the allocation of allowances, a distribution (almost) free of charge seems to be the most likely choice. An aspect that has interestingly attracted little attention in the past is the question of how to allocate emission rights over time. The following paper analyses different allocation options in multi-period emissions trading that are currently discussed in the European context. The options are applied for the electricity sector which is simulated over two periods. The paper distinguishes between a market effect of emissions trading and compliance costs for meeting the emission reduction obligation. The market effect results from a price increase which is due to the fact that opportunity costs for using allowances must be considered. It turns out that the electricity sector as a whole gains from the introduction of the instrument due to the increase of the electricity price. With regard to the different allocation options, it is found that utilities have different preferences depending on the fuel used.

In the context of environmental regulation emissions trading has gained acceptance and support in the past (Stavins, 2003). With regard to the fight against global warming, tradable greenhouse gas (GHG) emission entitlements have first been introduced on state level in the Kyoto-Protocol in 1997. Subsequently, it was implemented on entity level in the UK and Denmark. The most important example, however, may be the directive on a Europe-wide emissions trading scheme adopted in 2003 (EU, 2003). According this directive certain installations, i.e. major immobile sources of GHGs, are obliged to participate in a cap and trade scheme from January 1, 2005. The allocation of emission Entitlements, in the European context called allowances, is perceived as a very important issue from the companies’ point of view. Two main approaches have been focussed on during the discussion between governments and participants, namely an allocation based on emissions in a reference year and the use of an emission benchmark (PWC, 2003). With both options allowances are distributed free of charge. Interestingly, the question on how to design the allocation over time, i.e. in subsequent periods, has only attracted little attention. The impact of different alternative allocation options on the single installations has only rarely been addressed so far (for example, Burtraw et al., 2002 and Burtraw et al., 2001). Apart from that, existing literature, which is briefly reviewed below, generally either concentrates on the sector level or provides a pure analytical discussion. During the negotiations of the national allocation plans within the EU Member States this issue has either been overlooked or has not been discussed in public so far. Nevertheless, this question has to be answered in some way—possibly without knowing the exact implications. Against this background this article deals with the analysis of the impact of different allocation options on installations in the electricity sector. Electricity generation has been chosen as it is a major source of GHG emissions in Europe and plays an important role in the planned trading scheme. The focus is on the relative impacts of the allocation on different power generation technologies rather than on absolute effects of the allocation on this sector compared to other sectors covered by a trading scheme. It thus addresses equity issues within the electricity sector and does not discuss efficiency aspects. The analysis is based on a simulation of an artificial but realistic electricity market. As the focus is on the impacts of the allocation, only a few technical issues are considered. Transmission losses, for example, are fully neglected. The analysis is limited to a short-term perspective only. On the one hand, this is due to the fact that politically a short-term perspective is likely to influence current legislation the most. On the other hand the path for auctioning the allowances is already slightly paved in the European scheme. With a 100% auctioning, however, the problems discussed below, do not exist anymore.1 The paper first discusses the impact of emissions trading on firms from a theoretical perspective. Section 3 reviews different options for allocation allowances free of charge. Multi-period emissions trading in the electricity sector is analysed in detail in Section 4. Section 5 concludes.

Emission trading offers the opportunity to limit GHG emissions into the atmosphere cost-efficiently. This is one reason why the EU decided to implement a Europe-wide trading scheme for major sources such as combustion plants with a thermal power larger than 20 MW. Thus, the majority of the electricity sector must participate. However, many detailed design issues have not been decided yet. The question of how to allocate emission allowance over time is one of them. This paper has analysed this point using the electricity sector as an example. Using a stylised power market, four different allocation options have been used to analyse the resulting impact on different types of plants. It turned out that the electricity sector as a whole is likely to benefit from the introduction of the trading scheme as long as the allowances are distributed free of charge. The results, however, must be interpreted with caution as some simplified assumptions were made. If, for example, the assumption of the inelastic demand was released, the additional costs from emitting CO2 would not translate in a corresponding increase of the electricity price. Thus, the change in the variable gross margin would be smaller. Additionally, the incentive to increase output with an output-based allocation as described by Fischer (2001) and Burtraw et al. (2002) would have to be considered. Non-emitting facilities such as hydro or nuclear plants are indifferent with regard to the allocation rule. They always realise windfall profits as long as the marginal plant is fossil-fuelled. With regard to the later group of plants, it was shown that the preferences depend on the fossil fuel used as well as on the carbon costs. The result may serve decision makers in industry and policy during the negotiations on the design of the scheme. Future work will use more specific data on both, supply and demand side. Furthermore, the time period may be extended to allow new plants to enter the market. A more detailed distinction on installation level between abatement costs and compliance costs is also of interest though such data may be hard to collect.