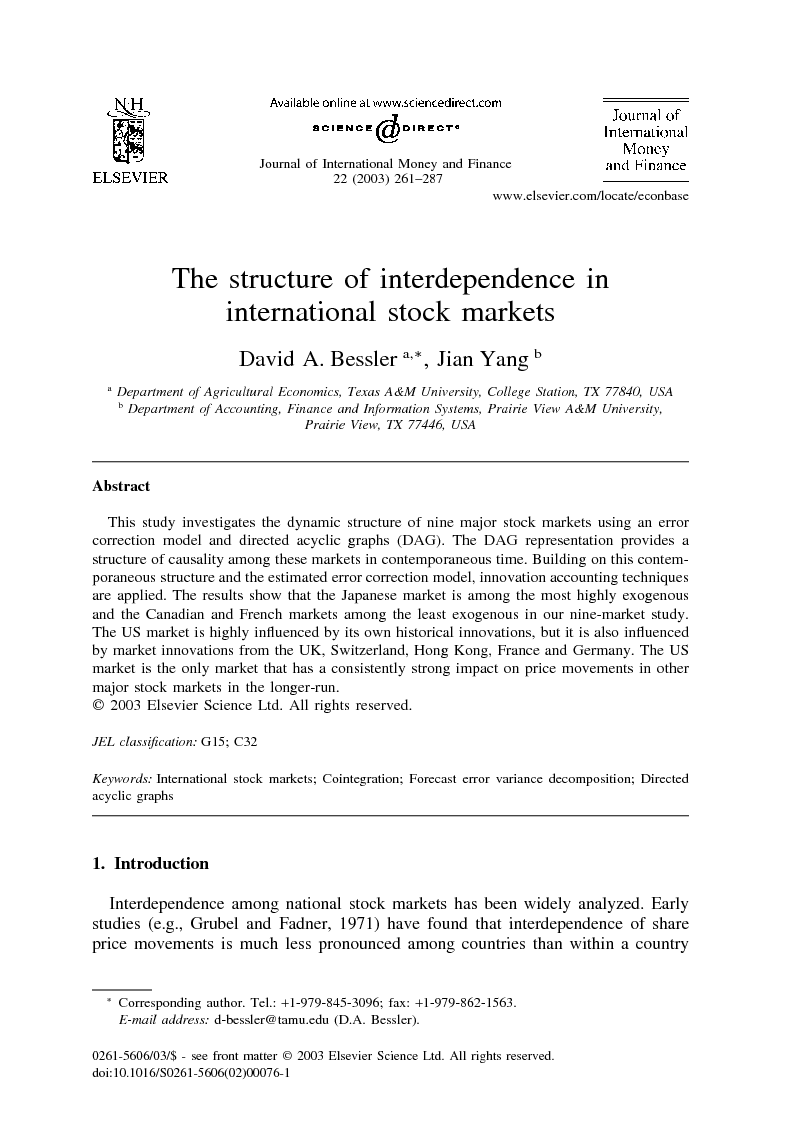 This study investigates the dynamic structure of nine major stock markets using an error correction model and directed acyclic graphs (DAG). The DAG representation provides a structure of causality among these markets in contemporaneous time. Building on this contemporaneous structure and the estimated error correction model, innovation accounting techniques are applied. The results show that the Japanese market is among the most highly exogenous and the Canadian and French markets among the least exogenous in our nine-market study. The US market is highly influenced by its own historical innovations, but it is also influenced by market innovations from the UK, Switzerland, Hong Kong, France and Germany. The US market is the only market that has a consistently strong impact on price movements in other major stock markets in the longer-run.

Interdependence among national stock markets has been widely analyzed. Early studies (e.g., Grubel and Fadner, 1971) have found that interdependence of share price movements is much less pronounced among countries than within a country (see also Eun and Shim, 1989).1 More recent works have paid considerable attention to the structure of interdependence among national stock markets. Two branches of research along this more recent line have emerged. As noted by Kasa (1992) and Francis and Leachman (1998), most empirical work on international stock markets has focused on stock returns and/or returns volatility rather than stock prices. A partial list of such work includes Eun and Shim, 1989, Hamao et al., 1990, Campbell and Hamao, 1992, Chan et al., 1992, King et al., 1994, Longin and Solnik, 1995 and Bekaert and Harvey, 1995, and Ammer and Mei (1996). Recognition of the nonstationary property of stock prices has led other researchers to explore possible long-run relations among national stock markets, using the notion of cointegration, as formally defined in Engle and Granger (1987). Taylor and Tonks, 1989, Kasa, 1992, Malliaris and Urrutia, 1992, Arshanapalli and Doukas, 1993 and Francis and Leachman, 1998, among others, found evidence of long run interdependence of major stock market prices. These studies generally fail to address the contemporaneous structure of interdependence (i.e., at the level of stock return innovations) in international stock markets, though the significant contemporaneous correlation among national stock market innovations has been documented in the literature (to be discussed below).2 Our contribution is to combine error correction modeling and directed acyclic graphs to facilitate a more in-depth exploration of the structure of interdependence in international stock markets. Particularly, we explore the direction of causality between innovations across stock markets (i.e., we study the direction of causal flow among residual returns from a vector autoregression (VAR)-type model). The fact that strong contemporaneous correlations exist across stock markets has been well documented in the literature (Eun and Shim, 1989, Koch and Koch, 1991 and Hasbrouck, 1995). The existence of such correlation makes the introduction of methods that can handle causal flow without the requirement of time lags (as is required by Granger-type causality) particularly important. Building on recent advances in statistical analysis of directed graphs (Spirtes et al., 1993, Pearl, 1995 and Swanson and Granger, 1997), this study proposes application of directed acyclic graphs to examine the causal structure among innovations in various stock markets from an error correction model. It is noteworthy that the empirical framework applied here can be used with any VAR representation of three or more time series. This may improve our ability to sort out empirical relationships in areas of application such as price discovery (Harris et al., 1995 and Hasbrouck, 1995) and interest rate linkages (Uctum, 1999), where strong correlation among innovations has also been documented3 The procedure suggested here may serve as a useful alternative to the widely used Choleski factorization of contemporaneous correlation, as the latter may yield unwarranted findings if the world does not present itself to us in lower triangular form.4 This study examines linkages among nine world major stock markets, using data from the late 1990s. The rest of this paper is organized as follows: Section 2 discusses the empirical methodology; Section 3 describes the data and related issues; Section 4 presents empirical findings on the long-run structure of interdependence; Section 5 presents empirical findings on the short-run structure and the contemporaneous structure of interdependence; and finally, Section 6 concludes.

This study is the first to apply directed acyclic graphs to help sort out causal ordering on innovations from a VAR or an error correction model using financial data. To investigate the structure of interdependence on the nine major stock markets, we apply an empirical framework that combines cointegration, error correction modeling, innovation accounting and directed acyclic graphs in a relatively novel way. Consistent with more recent work (e.g., Francis and Leachman, 1998), we find that stock index prices from nine countries (with exchange rate adjustments to US dollars) are cointegrated with one cointegrating vector. The hypothesis that Australia, Switzerland, Japan, and probably France and Germany are excluded from this long run relation cannot be rejected. Further, we show that it is only the US and Canadian markets that respond to perturbations in this long-run relation. To our knowledge such restrictions on the long-run relations between world major equity markets have not been discussed in the literature. We further explore the contemporaneous causal structure on innovations from these markets, that explicitly makes allowance for the real time differences of trading and correlation and partial correlation patterns between innovations from these markets. This contemporaneous structure is helpful in innovation accounting procedures. Several model specifications are explored and yield similar inference based on the forecast error variance decompositions, as summarized below. The dynamic structure shows that the Japanese market is the most highly exogenous in the sense that price information from other major stock markets explains a modest proportion of the stock price movement in this country. Also, innovations from the Japanese market explain relatively little of the stock price movement in other markets. This finding is consistent with Francis and Leachman (1998) in that the Japanese stock market is the least open or responsive to the other major stock markets and with Malliaris and Urrutia (1992), who find that the Japanese market plays a passive role in transmitting information to other stock markets. However, it does not support the argument that Japan has come to share leadership with the US (e.g., Koch and Koch, 1991) or that Japan acts like a follower in the world stock market (e.g., Eun and Shim, 1989). We find markets in Canada and France are among the least exogenous of nine markets in the sense that information from other national stock markets is most prevalent in explaining the stock price movement in these countries compared to other countries under study. By contrast, Eun and Shim (1989) find that Canada is highly endogenous but France is quite exogenous. Much of previous literature (e.g., Eun and Shim, 1989) emphasized the leading role of the US market in the world stock market. Eun and Shim (1989) reported that the US market is the most exogenous market. Innovation accounting results in our study show that, though the US market is highly influenced by its own historical innovations, it is also influenced by market innovations from the UK, Switzerland, Hong Kong, France, and Germany. Considering the increasing degree of integration between the US economy and the world economy, the result should not be too surprising. More importantly, it is found that the US market is probably the only market that has a consistently strong impact on price movements in other major stock markets in the longer-run (30 days). Arguably, this can be interpreted, consistent with Eun and Shim (1989), as the evidence of the US market’s role as the leader in world markets. Finally, the study shows that international stock markets are neither fully integrated nor completely segmented, which immediately suggests the potential for international diversification. The partial segmentation pattern among major stock markets (as specifically revealed in the innovation accounting results) may be particularly helpful for international investors to make diversification ecisions. For example, the Japanese market is found to be relatively isolated from other markets in this study, which might suggest Japan to be a good candidate for the purpose of international diversification.