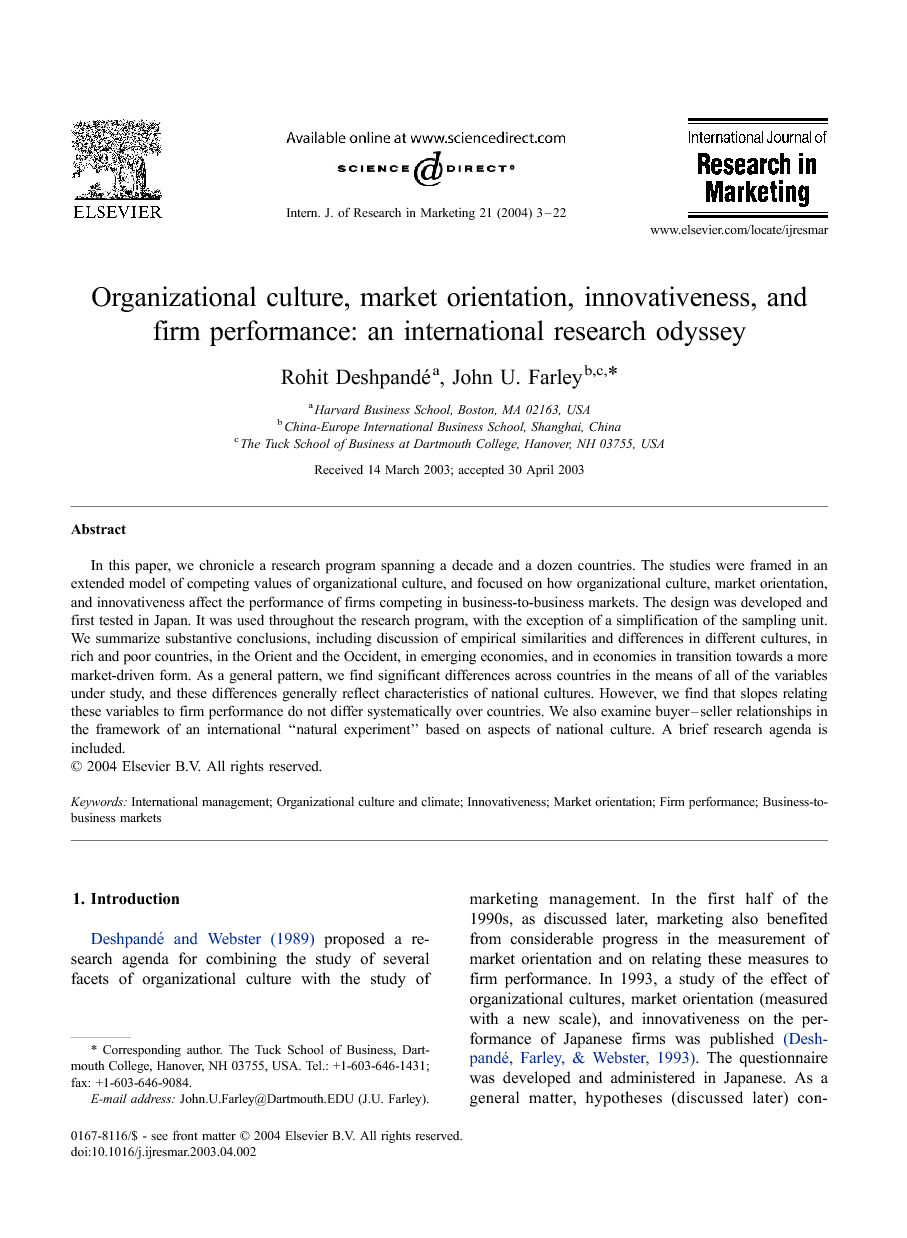 In this paper, we chronicle a research program spanning a decade and a dozen countries. The studies were framed in an extended model of competing values of organizational culture, and focused on how organizational culture, market orientation, and innovativeness affect the performance of firms competing in business-to-business markets. The design was developed and first tested in Japan. It was used throughout the research program, with the exception of a simplification of the sampling unit. We summarize substantive conclusions, including discussion of empirical similarities and differences in different cultures, in rich and poor countries, in the Orient and the Occident, in emerging economies, and in economies in transition towards a more market-driven form. As a general pattern, we find significant differences across countries in the means of all of the variables under study, and these differences generally reflect characteristics of national cultures. However, we find that slopes relating these variables to firm performance do not differ systematically over countries. We also examine buyer–seller relationships in the framework of an international “natural experiment” based on aspects of national culture. A brief research agenda is included.

Deshpandé and Webster (1989) proposed a research agenda for combining the study of several facets of organizational culture with the study of marketing management. In the first half of the 1990s, as discussed later, marketing also benefited from considerable progress in the measurement of market orientation and on relating these measures to firm performance. In 1993, a study of the effect of organizational cultures, market orientation (measured with a new scale), and innovativeness on the performance of Japanese firms was published (Deshpandé, Farley, & Webster, 1993). The questionnaire was developed and administered in Japanese. As a general matter, hypotheses (discussed later) concerning the relationship of performance to elements of the modified competing values model (also described later) were supported both quantitatively and qualitatively. In the latter half of the same decade, the field of management in general (Management Science, 1994) and the field of marketing in particular (Marketing Science, 1995) turned attention to knowledge generalization—that is, to how existing knowledge can be used to predict what will happen in new, partially analogous product/market situations (Aharoni & Burton, 1994). The Marketing Science Institute (MSI) recognized the need for integration of organizational culture, market orientation, and innovation as linked to firm performance by designating interdisciplinary research leading to a better understanding of customer-oriented organizations as a highest research priority (Marketing Science Institute, 1994). Since this was also a period of intense interest in the rapid progress of globalization, there was particular interest in developing global generalizations of marketing knowledge (Winer, 1998). Work expanded throughout the 1990s along the lines of testing a series of geographic generalizations of the research methodology and of substantive results developed in Japan. In the design of these extensions, the decision was made to maintain the same research methodology, retaining the advantages of direct comparability of measures, but at the same time losing the ability to really capitalize on the ongoing work in fields from which the research design was derived. Table 1 lists 9 published or forthcoming articles, which involved 10 countries (including pre-handover Hong Kong) and 17 cities. (To avoid highly repetitive citations in this paper, these articles and more recent working papers by the authors will be cited by the last initials and the year of publication—e.g. Deshpandé & Farley, 2002c and Deshpandé et al., 1993; other citations will be spelled out.) The articles are linked together by an effort to generalize conclusions, to the degree possible, quantitatively and non-contingently. The choice of countries and cities was largely driven by our research interests at the time, combined with some concerns with costs and the availability of skilled research suppliers.The first step in the sequence was a test of generalizability in four other industrial countries (Deshpandé, Farley, & Webster, 2000), a near replication which is discussed in detail later in this paper to illustrate both the research methodology and the substantive conclusions. Later studies (chronological in completion but not necessarily in publication) focused on different issues. Second was a test, which turned out to be successful, as to whether the methodology generalized to the industrializing world—in this case India (Deshpandé & Farley, 1999a). After a major simplification of the methodologies, two research streams followed. One stream involved Asian market economies (Hong Kong, India, and Thailand; Deshpandé & Farley, 2001) and the other focused on economies in transition from centralized economic planning to more market-driven structures (Vietnam, Deshpandé & Farley, 1999b, and China, Deshpandé & Farley, 2000). Finally, a comparison of six different cities was executed in culturally diverse China (Deshpandé & Farley, 2002a). Later, two studies reanalyzed some of the data to examine the interplay of national cultures and buyer–seller relationships (Deshpandé & Farley, 2002a; SDF, 2000).

We do not attempt to catalogue details of the results from the studies listed in Table 1. Rather, we attempt to identify common elements from which we can draw generalizations, supplemented by some of what we consider the more interesting specific findings. Section 4 contains the following: 1.Basic approach to analysis of cross-national differences on the measured values of the elements of the modified competing values model and analysis of country differences in how these elements affect performance. 2.Review of published comparisons in five industrial countries. 3. Discussion of consistencies in general patterns of results in six different settings. 4. Some of the more interesting specific results—for example, the degree of heterogeneity of cities in a culturally diverse country and potential usefulness of convenience samples. 5. Secondary research using part of the information to examine cross-cultural patterns of relationships in marketing