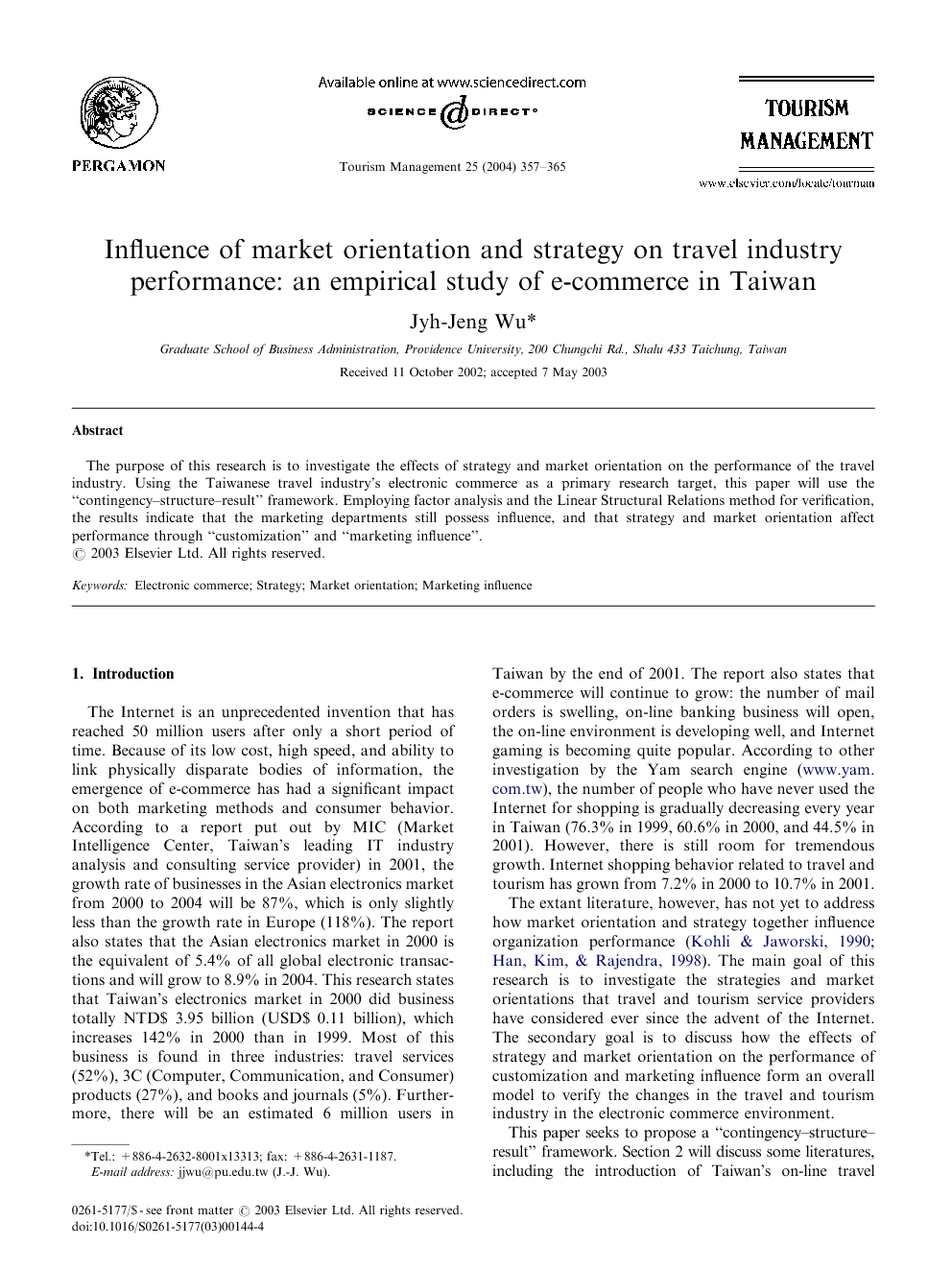 The purpose of this research is to investigate the effects of strategy and market orientation on the performance of the travel industry. Using the Taiwanese travel industry’s electronic commerce as a primary research target, this paper will use the “contingency–structure–result” framework. Employing factor analysis and the Linear Structural Relations method for verification, the results indicate that the marketing departments still possess influence, and that strategy and market orientation affect performance through “customization” and “marketing influence”.

The Internet is an unprecedented invention that has reached 50 million users after only a short period of time. Because of its low cost, high speed, and ability to link physically disparate bodies of information, the emergence of e-commerce has had a significant impact on both marketing methods and consumer behavior. According to a report put out by MIC (Market Intelligence Center, Taiwan's leading IT industry analysis and consulting service provider) in 2001, the growth rate of businesses in the Asian electronics market from 2000 to 2004 will be 87%, which is only slightly less than the growth rate in Europe (118%). The report also states that the Asian electronics market in 2000 is the equivalent of 5.4% of all global electronic transactions and will grow to 8.9% in 2004. This research states that Taiwan's electronics market in 2000 did business totally NTD$ 3.95 billion (USD$ 0.11 billion), which increases 142% in 2000 than in 1999. Most of this business is found in three industries: travel services (52%), 3C (Computer, Communication, and Consumer) products (27%), and books and journals (5%). Furthermore, there will be an estimated 6 million users in Taiwan by the end of 2001. The report also states that e-commerce will continue to grow: the number of mail orders is swelling, on-line banking business will open, the on-line environment is developing well, and Internet gaming is becoming quite popular. According to other investigation by the Yam search engine (www.yam.com.tw), the number of people who have never used the Internet for shopping is gradually decreasing every year in Taiwan (76.3% in 1999, 60.6% in 2000, and 44.5% in 2001). However, there is still room for tremendous growth. Internet shopping behavior related to travel and tourism has grown from 7.2% in 2000 to 10.7% in 2001. The extant literature, however, has not yet to address how market orientation and strategy together influence organization performance (Kohli & Jaworski, 1990; Han, Kim, & Rajendra, 1998). The main goal of this research is to investigate the strategies and market orientations that travel and tourism service providers have considered ever since the advent of the Internet. The secondary goal is to discuss how the effects of strategy and market orientation on the performance of customization and marketing influence form an overall model to verify the changes in the travel and tourism industry in the electronic commerce environment. This paper seeks to propose a “contingency–structure–result” framework. Section 2 will discuss some literatures, including the introduction of Taiwan’s on-line travel industry, market orientation and strategy typology, marketing influence and customization, and performance and concept framework. Section 3 will analyze research designs, including pilot-test, measurement of variables, and sampling method. Section 4 will show the research result, including factor analysis and structure model fit. The discussion of the result and a conclusion will be presented in Section 5. We argue that the marketing departments still possess influence, and that strategy and market orientation affect performance through “customization” and “marketing influence”.

Our research discusses how marketing's influence and cross-functional interactions function in the electronic market. There are two differences in our research in comparison to past research. First, most of the past research on e-commerce concentrates on discussing the application of the Internet, and merely examines either the use of net tools related to the application and performance of marketing activities, or on-line consumer behavior. Few of them refer to what happens to the inside of a company when e-commerce is introduced (Richardson, 2001). Second, most of the past marketing research draws more attention to the analysis of how market orientation influences business performance than to the discussion of how market orientation and strategy typology function together on business performance through the mediating roles of marketing's influence and cross-functional interactions. The result of our empirical research indicates marketing's influence and cross-functional interactions are mediating factors between market orientation and strategy typology and performance. Our findings support not only the concept of Jaworski and Kohli (1993) and Walker and Ruekert (1987), but also the model of contingency theory. We also find that marketing's influence and cross-functional interactions continue to play an important role even in the on-line environment (Day, 1994), and also as Porter (2001) states, strategy is still the core of e-commerce. There are also some managerial implications in our research. The marketing department is good at understanding the outside environment. If a strategy of a company can fit into its surroundings, its performance is usually improved. Thus, a marketing department in a company becomes crucial for a company to make its strategies fit with its surroundings. This idea is also useful in the Internet age, which is a new era for all companies. This is especially true when there are more and more companies participating in on-line industries and considering e-commerce as a tool to help them create a new competitive advantage. However, many companies fail to take into consideration the effects of introducing e-commerce. This oversight causes conflicts between departments, and hence negatively influences their business performance. As a result, companies have to consider, in various ways, the impact of their outside environment when they take part in the on-line industry, and employ the appropriate management, arrangement of departments, and mechanism of organization to improve their performance (Pfeffer, 1992). The objective of this research is to examine if the relationship between contingency determinants and performance depends on marketing's influence and cross-functional interactions in the electronic market. Our work can be extended in several directions. First, the research focuses only on the discussion of business-to-consumer commerce; further research might examine business-to-business e-commerce. Second, because marketing's influence discussed in this research is limited to the influence of marketing on the decision-making process of main issues in business, further research might focus on the influence of other functions, such as R&D. Finally, as the scope of marketing's influence seems too broad, future research might narrow down the scope of research to specifics like the discussion of relationship marketing.