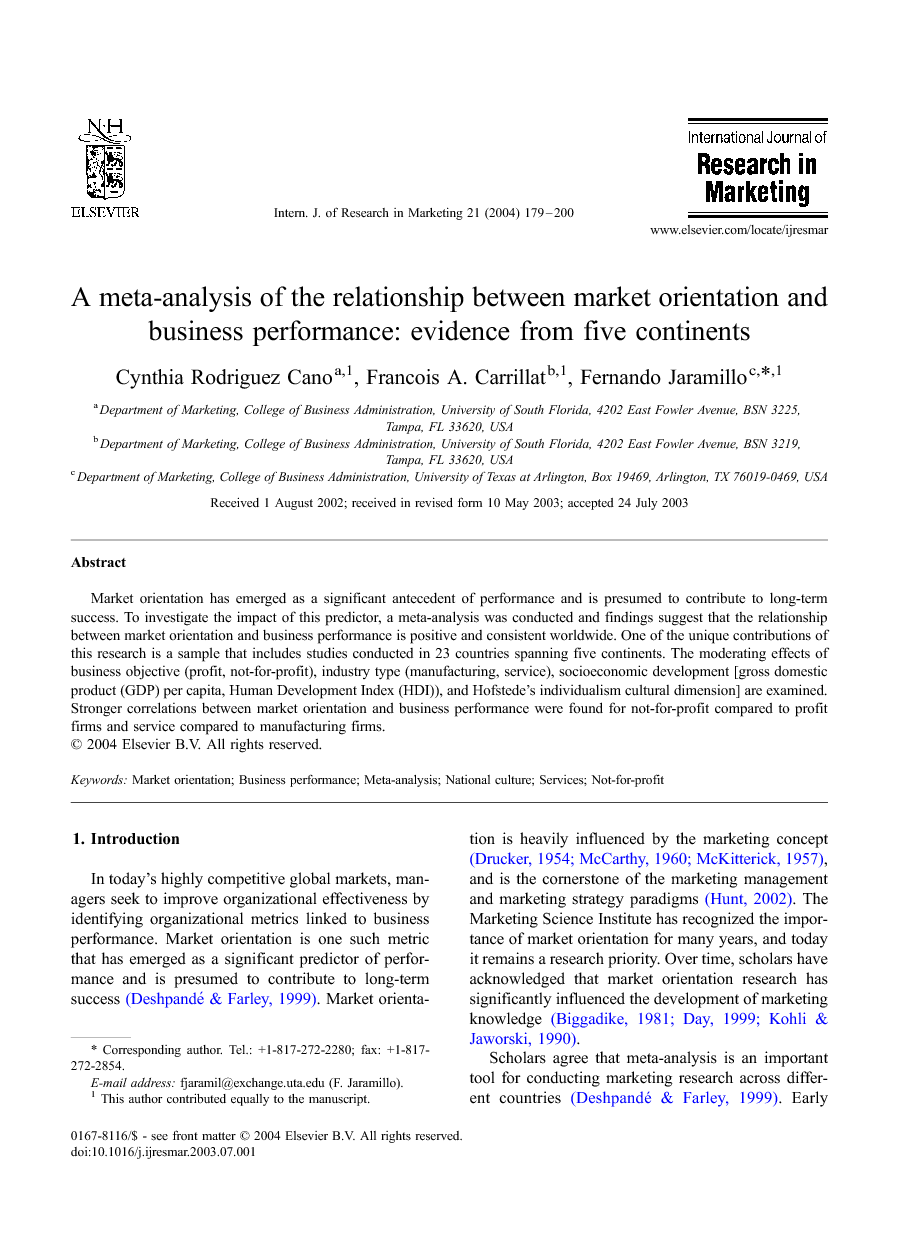 Market orientation has emerged as a significant antecedent of performance and is presumed to contribute to long-term success. To investigate the impact of this predictor, a meta-analysis was conducted and findings suggest that the relationship between market orientation and business performance is positive and consistent worldwide. One of the unique contributions of this research is a sample that includes studies conducted in 23 countries spanning five continents. The moderating effects of business objective (profit, not-for-profit), industry type (manufacturing, service), socioeconomic development [gross domestic product (GDP) per capita, Human Development Index (HDI)), and Hofstede's individualism cultural dimension] are examined. Stronger correlations between market orientation and business performance were found for not-for-profit compared to profit firms and service compared to manufacturing firms.

The findings of this study support the widely held marketing notion that the attainment of organizational goals is achieved by satisfying the needs of customers more efficiently and effectively than competitors. A rapidly changing environment requires quick and continual adaptation by management, whose ability to enhance operational efficiencies may lie in their ability to develop and embrace an organization-wide commitment to market orientation (Wood, Bhuian, and Kiecker, 2000). The results of this meta-analysis support Sheth's (2001) argument that powerful macroeconomic forces are reshaping the world and national boundaries are becoming obsolete in determining differential marketing practices. Regional integration, ideology-free world, technology advances, and borderless markets (Sheth, 2001) contribute to the findings that, across countries, the relationship between market orientation and business performance is significantly positive and not influenced by the various degrees of socioeconomic development and national culture (i.e., individualism). The movement to a borderless world brings forward the importance of defining other elements that impact the relationship between market orientation and business performance. Two such elements are uncovered in this meta-analysis: organizational objective (profit, not-for-profit) and industry type (service, manufacturing). The fact that the relationship between market orientation and business performance is stronger in a service setting than in a manufacturing setting and stronger for not-for-profit organizations compared to profit organizations brings support to the broadening of the marketing concept (Kotler & Levy, 1969). However, a limitation of this study is that due to the high correlation between industry type and organization objective (ρ=0.62), this study cannot determine which one of the two variables is the true moderator.