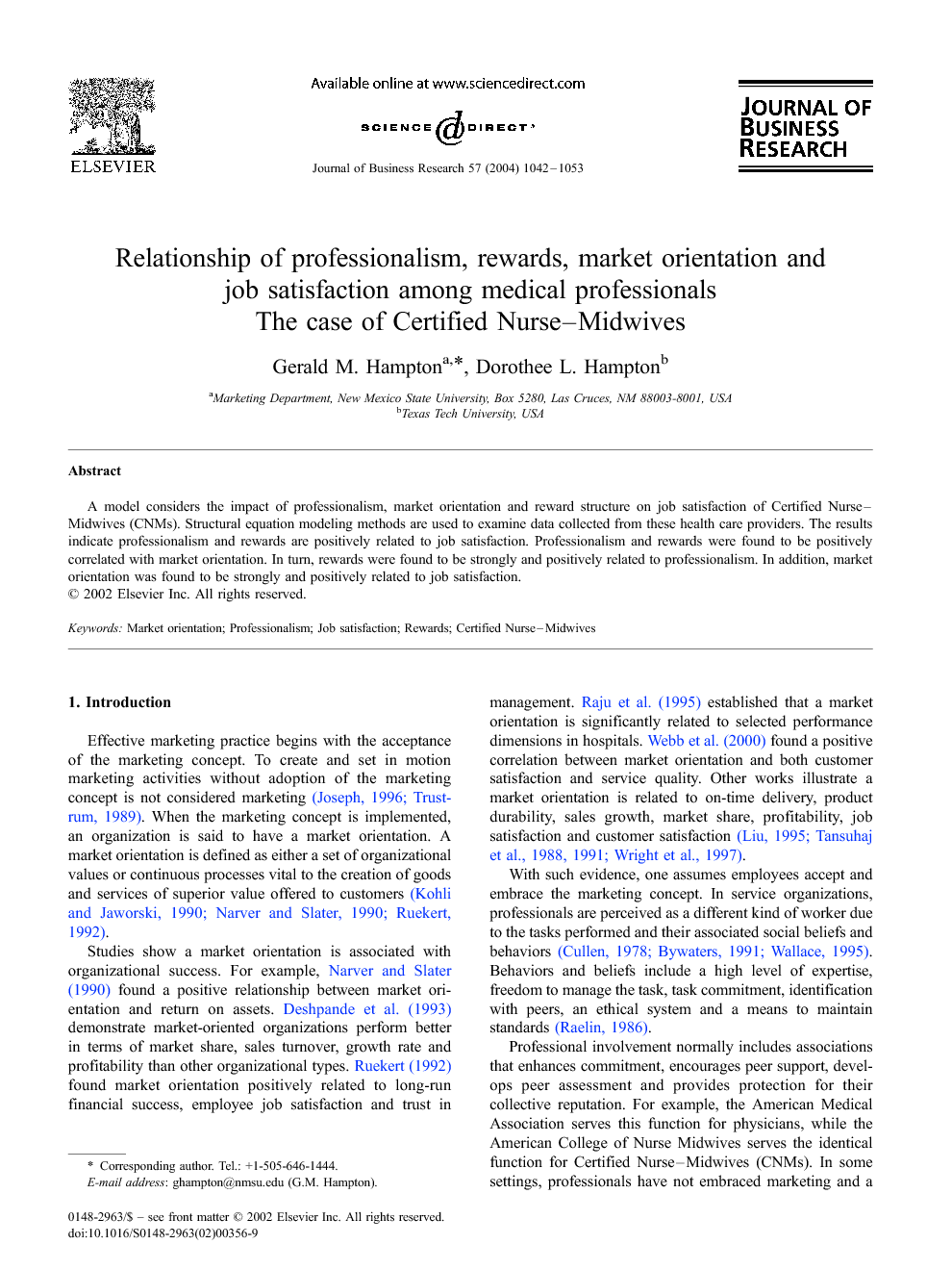 Effective marketing practice begins with the acceptance of the marketing concept. To create and set in motion marketing activities without adoption of the marketing concept is not considered marketing Joseph, 1996 and Trustrum, 1989. When the marketing concept is implemented, an organization is said to have a market orientation. A market orientation is defined as either a set of organizational values or continuous processes vital to the creation of goods and services of superior value offered to customers Kohli and Jaworski, 1990, Narver and Slater, 1990 and Ruekert, 1992. Studies show a market orientation is associated with organizational success. For example, Narver and Slater (1990) found a positive relationship between market orientation and return on assets. Deshpande et al. (1993) demonstrate market-oriented organizations perform better in terms of market share, sales turnover, growth rate and profitability than other organizational types. Ruekert (1992) found market orientation positively related to long-run financial success, employee job satisfaction and trust in management. Raju et al. (1995) established that a market orientation is significantly related to selected performance dimensions in hospitals. Webb et al. (2000) found a positive correlation between market orientation and both customer satisfaction and service quality. Other works illustrate a market orientation is related to on-time delivery, product durability, sales growth, market share, profitability, job satisfaction and customer satisfaction Liu, 1995, Tansuhaj et al., 1988, Tansuhaj et al., 1991 and Wright et al., 1997. With such evidence, one assumes employees accept and embrace the marketing concept. In service organizations, professionals are perceived as a different kind of worker due to the tasks performed and their associated social beliefs and behaviors Cullen, 1978, Bywaters, 1991 and Wallace, 1995. Behaviors and beliefs include a high level of expertise, freedom to manage the task, task commitment, identification with peers, an ethical system and a means to maintain standards (Raelin, 1986). Professional involvement normally includes associations that enhances commitment, encourages peer support, develops peer assessment and provides protection for their collective reputation. For example, the American Medical Association serves this function for physicians, while the American College of Nurse Midwives serves the identical function for Certified Nurse–Midwives (CNMs). In some settings, professionals have not embraced marketing and a market orientation since it challenges aspects of professionalism, especially job autonomy and freedom to develop and establish processes for the tasks performed Dawson, 1994, Morgan and Piercy, 1991 and Whittington and Whipp, 1992. Mayer (1997) emphasizes this point when he says that the most important organizational issue today is how can a modern society, deeply dependent on its professional class, assure itself that professional work—law, medicine, architecture, accountancy, engineering, teaching—will be done skillfully in the right quantities for the right reasons at the right price? In other words, how can we be sure professional service firms will be market-oriented, thereby creating the environment many feel essential for delivering customer value and consumer satisfaction? This study proposes and tests a conceptual framework that considers the impact of professionalism, market orientation and reward structure on job satisfaction for one group of medical professionals, CNMs. It also examines the relationship between rewards and professionalism. Section 2 develops the conceptual framework for this research.