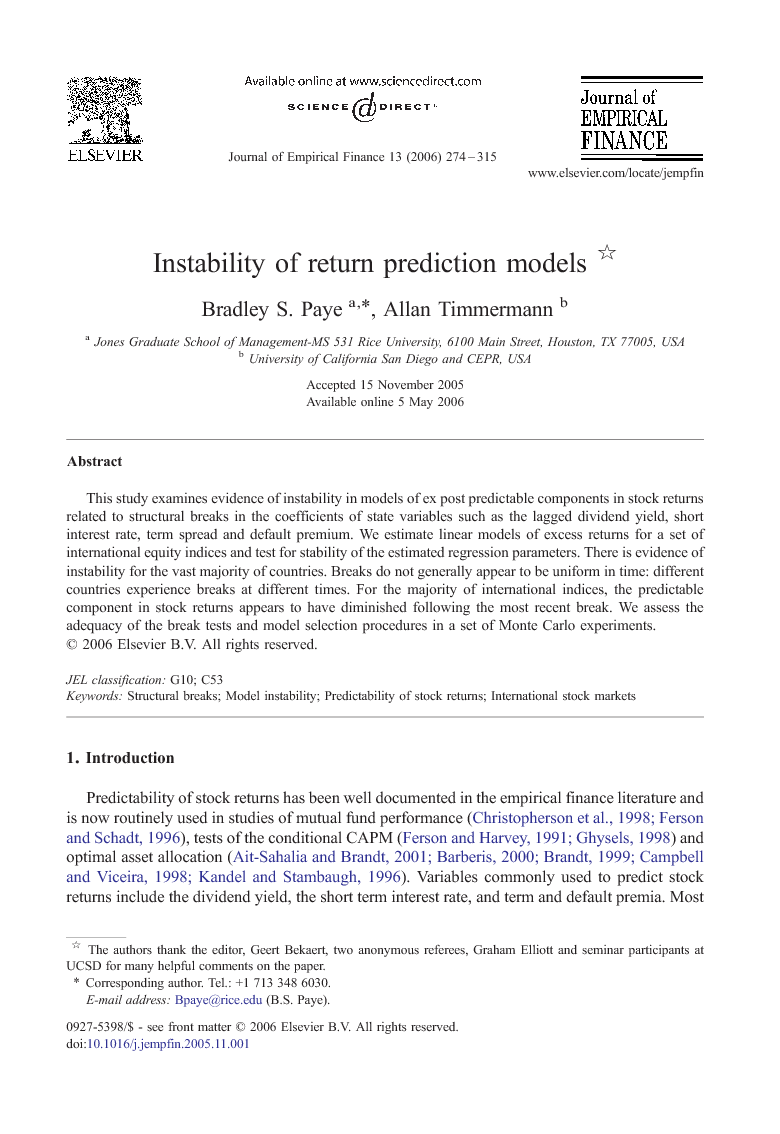 This study examines evidence of instability in models of ex post predictable components in stock returns related to structural breaks in the coefficients of state variables such as the lagged dividend yield, short interest rate, term spread and default premium. We estimate linear models of excess returns for a set of international equity indices and test for stability of the estimated regression parameters. There is evidence of instability for the vast majority of countries. Breaks do not generally appear to be uniform in time: different countries experience breaks at different times. For the majority of international indices, the predictable component in stock returns appears to have diminished following the most recent break. We assess the adequacy of the break tests and model selection procedures in a set of Monte Carlo experiments.

This study presents systematic empirical evidence of structural breaks in models of predictable components in international stock returns based on the lagged dividend yield, short interest rate, term spread and default premium. We find evidence of breaks for the vast majority of countries in multivariate regression models for excess returns. Further, our results indicate that the relationship between particular state variables and stock returns may change substantially following a break. Empirical evidence of predictability is not uniform over time and is concentrated in certain periods. For a number of the countries examined in our study ex post predictability appears to be substantially weaker after the most recent break, although a few exceptions exist. Using a longer historical dataset for the UK and US we find evidence of a common break around 1974–1975, which we relate to the oil price shock. Additionally, there is some evidence of a common break experienced by a number of European stockmarkets during the period 1978–1982.We suggest that this breakmay be related to the introduction of the European Monetary System in 1979 and the associated constraints imposed on monetary and fiscal policy in member nations. The presence of structural breaks in predictive return regressions raises several economically interesting issues. First, how should conditional expected returns be estimated in the presence of breaks? One possibility is to use data after the most recently identified break date. Pesaran and Timmermann (2002) propose a procedure that reverses the ordering of the data in the prediction model and estimates themodel parameters using only post-break data. This method determines the break date using a Cusum-squared test and directly addresses the question of how much historical data to use. Such an approach is, however, unlikely to work well if the data sample after the most recent break is very short. For this case, Pesaran and Timmermann (in press) prove that it can be optimal to use prebreak data provided that the break is not very large (so the bias in the predictive return regression does not get too large). They propose viewing the length of the data window used in estimation of the conditional mean as a separate parameter that is optimally chosen to trade-off (squared) bias against reduction in parameter estimation error resulting from using pre-break data. Avery active strand in the finance literature considers asset allocation problems in the presence of predictable asset returns (see, e.g., Ait-Sahalia and Brandt, 2001; Barberis, 2000; Brandt, 1999; Campbell and Viceira, 1998; Kandel and Stambaugh, 1996). The predominant approach in the literature is to presume a time-invariant relationship between forecasting variables and expected returns. Clearly, the possibility of breaks and time-variation in the conditional mean function for asset returns complicates the portfolio allocation problem. Thus, a second question is how to adjust portfolio weights in the presence of breaks to the return forecasting equation. Answering this question requires a full-blown model for the underlying breakpoint process since the predictive density of future stock returns now becomes a mixture of the return distribution conditional on no future breaks (i.e., remaining in the current regime) and the return distribution given that a break occurs. Hence the probability of a future breakmust be computed and the parameters of the return predictionmodel after a break must be drawn from some ‘meta distribution’ characterizing the parameters across the various break segments. This is best accomplished using a Bayesian approach, but relies on distributional assumptions about the regressor variables, error terms and the underlying breakpoint process that go beyond the present paper. These issues are addressed by Pettenuzzo and Timmermann (2005) who find that structural breaks can have significant effects on the optimal asset allocation.