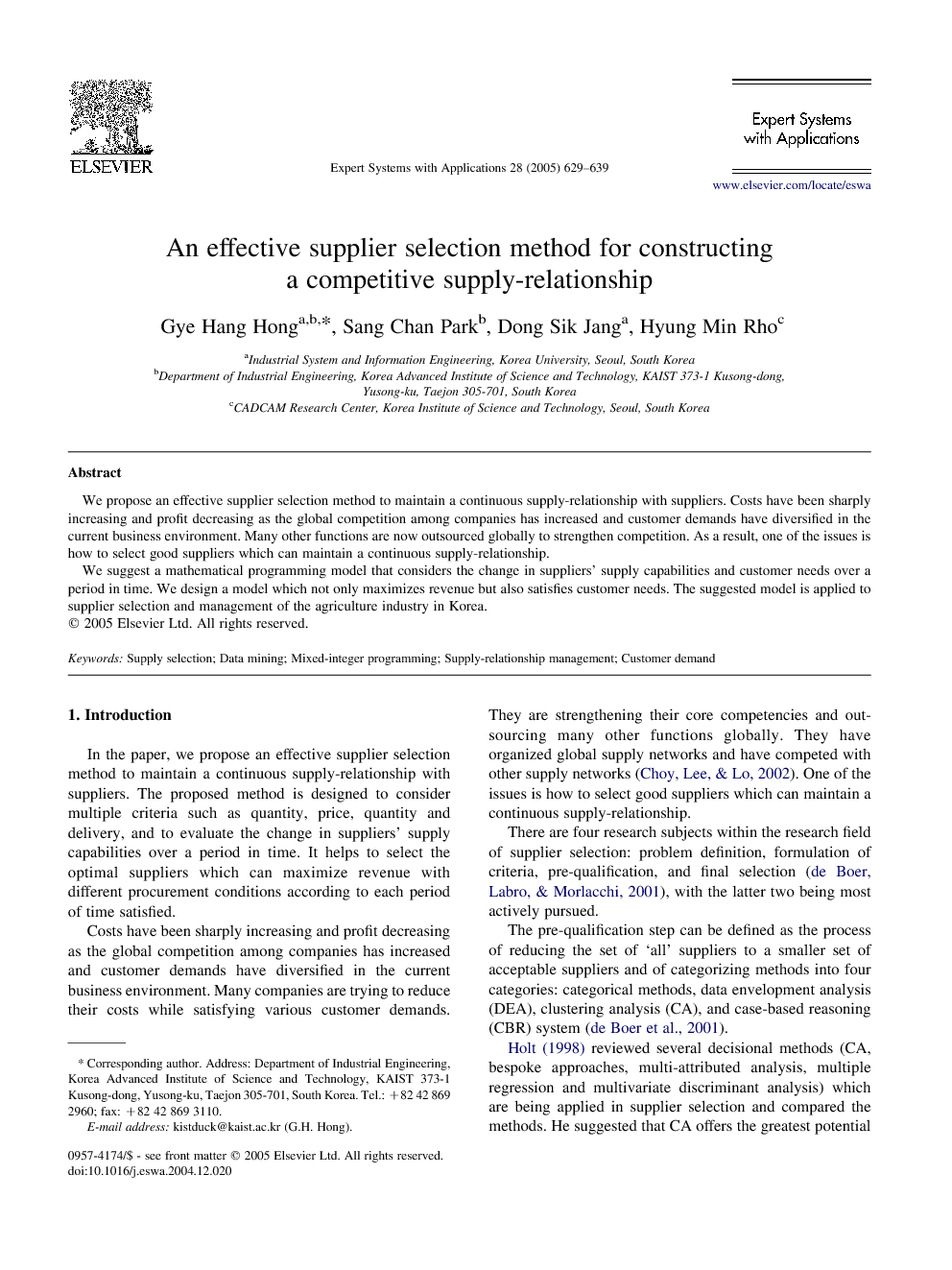 We propose an effective supplier selection method to maintain a continuous supply-relationship with suppliers. Costs have been sharply increasing and profit decreasing as the global competition among companies has increased and customer demands have diversified in the current business environment. Many other functions are now outsourced globally to strengthen competition. As a result, one of the issues is how to select good suppliers which can maintain a continuous supply-relationship. We suggest a mathematical programming model that considers the change in suppliers' supply capabilities and customer needs over a period in time. We design a model which not only maximizes revenue but also satisfies customer needs. The suggested model is applied to supplier selection and management of the agriculture industry in Korea.

In the paper, we propose an effective supplier selection method to maintain a continuous supply-relationship with suppliers. The proposed method is designed to consider multiple criteria such as quantity, price, quantity and delivery, and to evaluate the change in suppliers' supply capabilities over a period in time. It helps to select the optimal suppliers which can maximize revenue with different procurement conditions according to each period of time satisfied. Costs have been sharply increasing and profit decreasing as the global competition among companies has increased and customer demands have diversified in the current business environment. Many companies are trying to reduce their costs while satisfying various customer demands. They are strengthening their core competencies and outsourcing many other functions globally. They have organized global supply networks and have competed with other supply networks (Choy, Lee, & Lo, 2002). One of the issues is how to select good suppliers which can maintain a continuous supply-relationship. There are four research subjects within the research field of supplier selection: problem definition, formulation of criteria, pre-qualification, and final selection (de Boer, Labro, & Morlacchi, 2001), with the latter two being most actively pursued. The pre-qualification step can be defined as the process of reducing the set of ‘all’ suppliers to a smaller set of acceptable suppliers and of categorizing methods into four categories: categorical methods, data envelopment analysis (DEA), clustering analysis (CA), and case-based reasoning (CBR) system (de Boer et al., 2001). Holt (1998) reviewed several decisional methods (CA, bespoke approaches, multi-attributed analysis, multiple regression and multivariate discriminant analysis) which are being applied in supplier selection and compared the methods. He suggested that CA offers the greatest potential for pre-qualifying all suppliers because it reduces the probability of rejecting a ‘good’ supplier too early in the process via subjective reduction of the often large original set. CA enlarges the scope for rationalization of the selection process by identifying the criteria involved. Because of these merits, we use one of the several CA methods for evaluating all available suppliers in the pre-qualification step. The methods suggested in the final selection step are categorized into the following models: linear weighting, total cost of ownership, mathematical programming (MP), statistics, and AI. Most methods belong to linear weighting and MP models. MP allows the decision-maker to formulate the decision problem in terms of a mathematical objective function that subsequently needs to be maximized (e.g. maximizing profit) or minimized (e.g. minimizing costs) by varying the values of variables in the objective function (e.g. the amount ordered with supplier X). Weber and Desai (1996) illustrated how a parallel axis analysis can be used to identify alternative paths in which inefficient vendors can become efficient providers of a product. Weber, Current, and Desai (1998) expanded their models to negotiate with suppliers selected by the MOP model under non-cooperative negotiation strategy. Especially, they showed that values of supplier selection changed according to the number of suppliers. In linear weighting models weights are given to the criteria, where the biggest weight indicates the highest importance. Ratings on the criteria are multiplied by their weights and summed in order to obtain a single figure for each supplier. The supplier with the highest overall rating can then be selected. Lee, Ha, and Kim (2001) suggested the supplier selection and management system (SSMS) which used the linear weighting model to calculate the weights of tangible and intangible criteria and to rank the suppliers' performance. The characteristic of the system is the process which identifies the weak criteria of selected suppliers by comparing with alternative suppliers. SSMS informs us of the directions for improving supplier performance. We have formulated the following conjectures by carefully examining the existing research results. (1) We must evaluate the change in suppliers' supply capabilities over a period in time. (2) Suppliers should be evaluated with more than one criterion (e.g. price, quality, delivery performance). (3) We should design a multi-steps model for reducing the complexity of the supplier selection problem. (4) We must select suppliers which can maximize the revenue with different procurement conditions by each period in time satisfied. (5) We identify the changing supply conditions of the selected suppliers over the period in time for taking necessary actions. We suggest an MP model that considers the change in suppliers' supply capabilities and customer needs over a period in time. We design the model which not only maximizes revenue but does so while satisfying customer needs.

We suggested an effective supplier selection method for maximizing revenue while satisfying the procurement condition. We identified three problems and suggested a method for their solution. (1) Evaluating the change in suppliers' capability conditions and customer needs (i.e. procurement condition) over the period in time. (2) Defining the important criteria and using them step-by-step to reduce the complexity of the problem. (3) Selecting suppliers to maximize revenue while satisfying the procurement condition and maintaining the supplier-relationship for a long period in time. The method consists of three steps: preparation, pre-qualification, and final selection. In the preparation step, we summarize the data by the unit period in terms of weeks or packs of 10 days. In the pre-qualification step, we divide the total analyzing period into several MPUs, identify customer needs by MPU, and segment suppliers into several groups sharing similar features. Then we evaluate the features of each group. In the final selection step, we finally select the optimal set of suppliers for maximizing the revenue of the company and minimizing the supply risk of the final selected set of suppliers. We applied the method in the case of the agriculture industry in Korea and compared it to the revised Weber model in terms of the shortage of order, revenue, and the number of managing suppliers. The shortage of order did not occur in our method, but did in the revised Weber model except the first MPU. Because of the shortage, the number of managing suppliers was increased and the order amount of each supplier was decreased in the revised Weber model. As a result, the revenue of the revised Weber model was less than that of our method. Our method informed us of the changes of future supply condition and the directions for managing the suppliers. Although we applied the method in the case of the Korean agriculture industry, we can further expand the range of application to other industries in which the supply condition undergoes excessive change over period in time. Because many supplied products are aggregated to one final product in several cases of these industries, it is very difficult to measure the profit of the final product which is affected by each supplied product. We estimated the suppliers and their order quantities in the next year by analyzing the data of the past year. However, we could not determine whether it is better to use data of the past single year for the analysis or data of the past several years. Further research is necessary to answer this question.