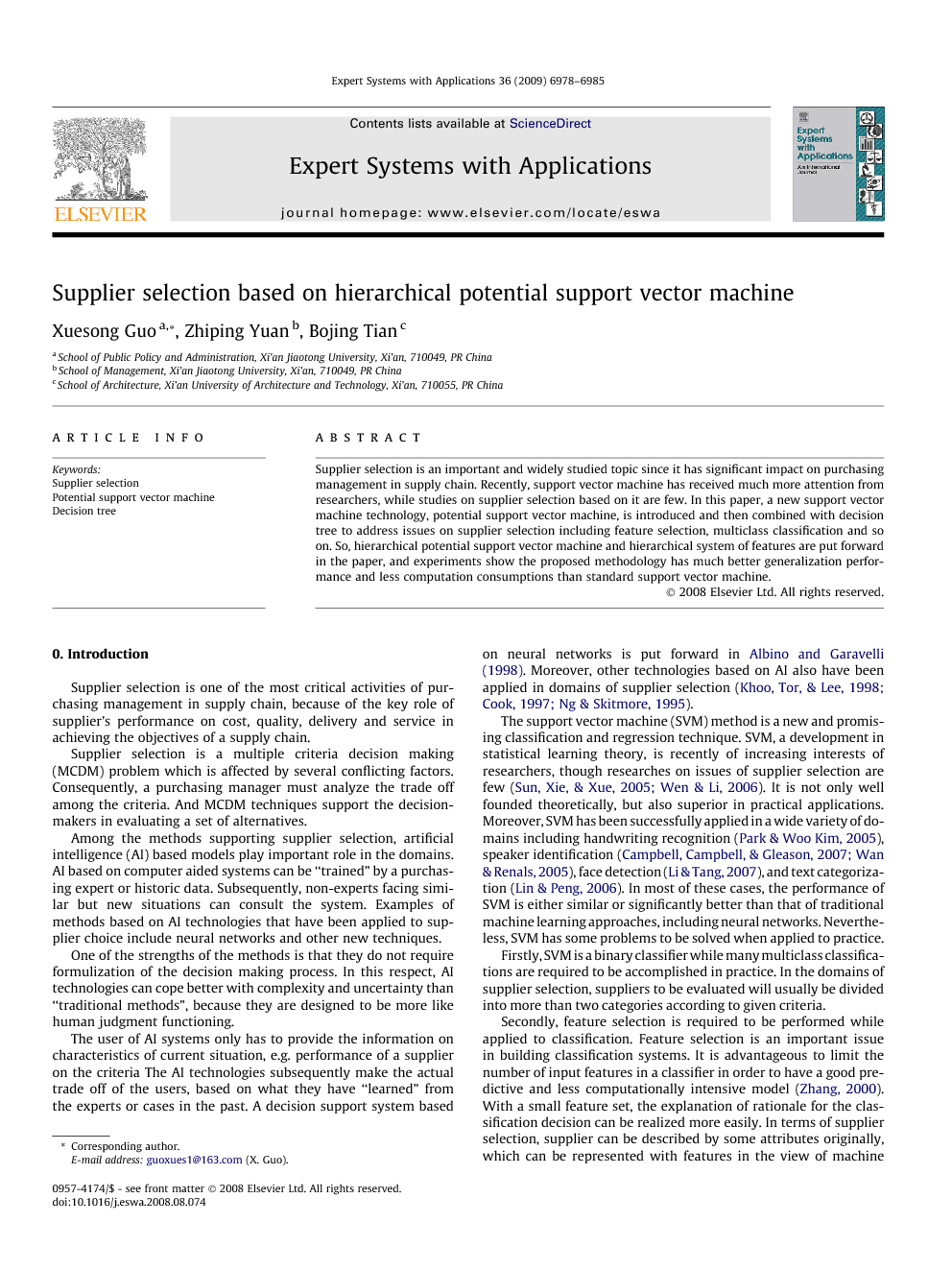 Supplier selection is one of the most critical activities of purchasing management in supply chain, because of the key role of supplier’s performance on cost, quality, delivery and service in achieving the objectives of a supply chain. Supplier selection is a multiple criteria decision making (MCDM) problem which is affected by several conflicting factors. Consequently, a purchasing manager must analyze the trade off among the criteria. And MCDM techniques support the decision-makers in evaluating a set of alternatives. Among the methods supporting supplier selection, artificial intelligence (AI) based models play important role in the domains. AI based on computer aided systems can be “trained” by a purchasing expert or historic data. Subsequently, non-experts facing similar but new situations can consult the system. Examples of methods based on AI technologies that have been applied to supplier choice include neural networks and other new techniques. One of the strengths of the methods is that they do not require formulization of the decision making process. In this respect, AI technologies can cope better with complexity and uncertainty than “traditional methods”, because they are designed to be more like human judgment functioning. The user of AI systems only has to provide the information on characteristics of current situation, e.g. performance of a supplier on the criteria The AI technologies subsequently make the actual trade off of the users, based on what they have “learned” from the experts or cases in the past. A decision support system based on neural networks is put forward in Albino and Garavelli (1998). Moreover, other technologies based on AI also have been applied in domains of supplier selection (Khoo et al., 1998, Cook, 1997 and Ng and Skitmore, 1995). The support vector machine (SVM) method is a new and promising classification and regression technique. SVM, a development in statistical learning theory, is recently of increasing interests of researchers, though researches on issues of supplier selection are few (Sun et al., 2005 and Wen and Li, 2006). It is not only well founded theoretically, but also superior in practical applications. Moreover, SVM has been successfully applied in a wide variety of domains including handwriting recognition (Park & Woo Kim, 2005), speaker identification (Campbell et al., 2007 and Wan and Renals, 2005), face detection (Li & Tang, 2007), and text categorization (Lin & Peng, 2006). In most of these cases, the performance of SVM is either similar or significantly better than that of traditional machine learning approaches, including neural networks. Nevertheless, SVM has some problems to be solved when applied to practice. Firstly, SVM is a binary classifier while many multiclass classifications are required to be accomplished in practice. In the domains of supplier selection, suppliers to be evaluated will usually be divided into more than two categories according to given criteria. Secondly, feature selection is required to be performed while applied to classification. Feature selection is an important issue in building classification systems. It is advantageous to limit the number of input features in a classifier in order to have a good predictive and less computationally intensive model (Zhang, 2000). With a small feature set, the explanation of rationale for the classification decision can be realized more easily. In terms of supplier selection, supplier can be described by some attributes originally, which can be represented with features in the view of machine learning. And a subset of attributes by which suppliers are described should be selected from original ones so as to establish a system of criteria because some features are too noisy or not conveying correct information and can’t be used in subsequent evaluation procedures. In order to accomplish feature selection when standard SVM is applied, many complex algorithms, i.e., GA (Huang & Wang, 2006), chaos optimization etc., have to be used only to improve computation consumption. In this paper, a novel SVM approach, potential support vector machine (P-SVM) (Hochreiter & Obermayer, 2006) which can accomplish binary classifiers construction and feature selection simultaneously, is introduced to the study at first. And method proposed in the paper combines P-SVM and decision tree into a new algorithm, called as hierarchical potential support vector machine, which can accomplish multiclass classification and feature selection simultaneously. Therefore, a new system of criteria represented as hierarchical structure, which can be applied to supplier description, established with the method employed to solve problems of standard SVM mentioned above is put forward in the paper.

Supplier selection is affected by too many factors whose effects are too complex to be identified by traditional methods. By introducing P-SVM with high performance of feature extraction, the most “informative” features are selected from all original ones while the optimal classifier is being selected. In this paper, a novel method based on P-SVM combined with decision tree, which is applied by transforming supplier selection to multiclass classification problem, is introduced. And results based on it provide not only the classification function but also the list of most “informative” criteria represented with features selected from original ones. Therefore, the proposed method improves performance in the following two ways. Firstly, number of binary classifiers is reduced greatly by introducing hierarchical structure. In the paper, the hierarchical structure is generated with adapted Kruskal algorithm to improve classification accuracy and reduce computation consumption. Secondly, the most “informative” features are selected by P-SVM to establish classifiers to improve generalization performance greatly. Moreover, computation consumption is reduced further due to reduction of numbers of features applied to actual classification. In the end of the paper, experiments on the data from China illustrate both procedures of the proposed methodology and its advantages against standard SVM.