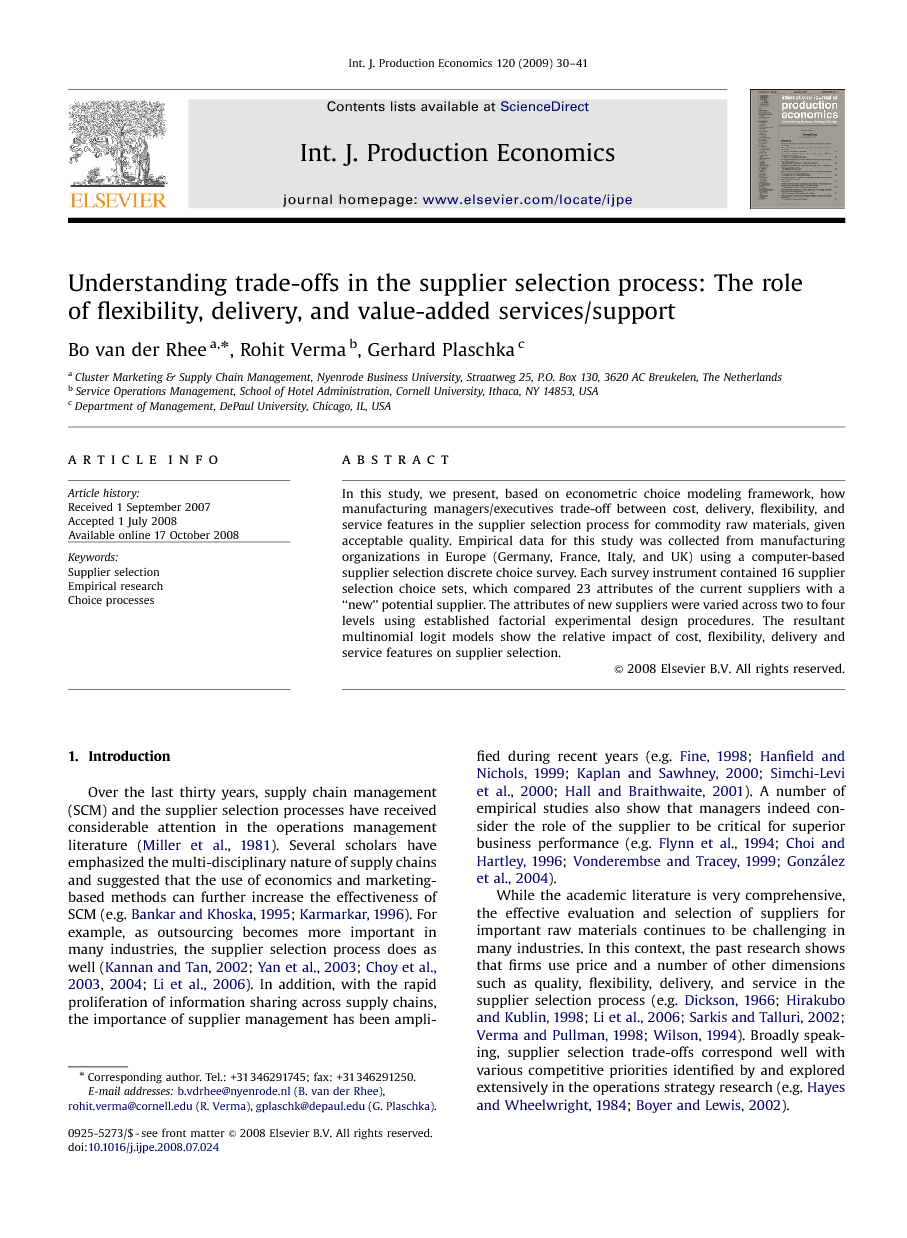 In this study, we present, based on econometric choice modeling framework, how manufacturing managers/executives trade-off between cost, delivery, flexibility, and service features in the supplier selection process for commodity raw materials, given acceptable quality. Empirical data for this study was collected from manufacturing organizations in Europe (Germany, France, Italy, and UK) using a computer-based supplier selection discrete choice survey. Each survey instrument contained 16 supplier selection choice sets, which compared 23 attributes of the current suppliers with a “new” potential supplier. The attributes of new suppliers were varied across two to four levels using established factorial experimental design procedures. The resultant multinomial logit models show the relative impact of cost, flexibility, delivery and service features on supplier selection.

Leading publications in business management emphasize the need for understanding manufacturing and supply chain related decisions and practices for improving the competitive position of a firm. Various publications argue that it is necessary for these managerial decisions and choices to be consistent with the corporate strategy for effective operations management. The objective of this research was to understand one strategic operating decision area: the supplier selection process. As more manufacturing organizations adopt extended-enterprise concepts, the role of supplier and supply chain management becomes even more important. Our study was designed primarily to study how managers’ trade-off among cost, value-added, delivery performance, and flexibility attributes when choosing a supplier for major components and/or raw materials, given acceptable quality. The results presented in this paper have important implications for operations strategy and supply chain management research. We found that overall the managers valued the suppliers’ flexibility the most, and in particular the attributes of manufacturing tolerances, product ranges, acceptance of small orders, and expertise with the use of alloys. Flexibility was followed by the cost variable in importance; especially respondents from Italy (and to a somewhat lesser degree those from France and the UK) indicated that the price was very important in the supplier selection process. Thus, our results do not only show which attributes are important in the supplier selection process, they also show a level of agreement with previous studies in cultural differences (Hofstede, 2003; Schroeder and Flynn, 2001). In this context it is interesting to note that although the Germans valued the cost subgroup as the least important out of the seven subgroups; the other respondents valued this attribute as the third most important overall. Furthermore, our research shows some interesting differences with past research. First of all we used the DCA approach in an innovative way as we had our respondents choose between their current supplier and a hypothetical new one, a method to our knowledge never applied before in the supplier selection literature. Also, past literature mostly agrees that quality, cost and delivery performance are the most important variables when selecting a supplier (except for Verma and Pullman, 1998), while in our research the quality was assessed as “conforming to specifications” and therefore not part of the attributes. As a result, we found that flexibility was the most important variable overall, followed by cost and delivery performance.