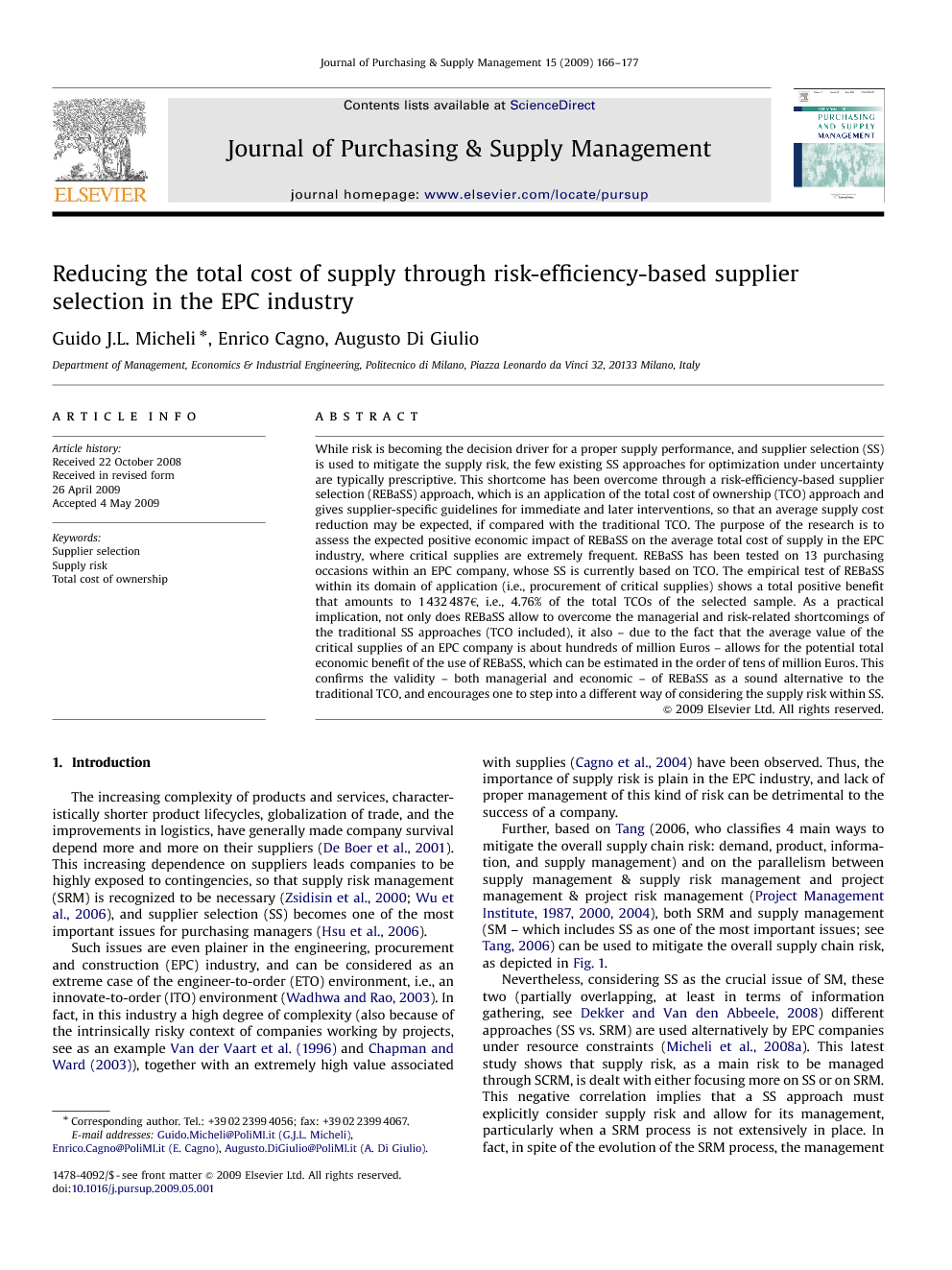 While risk is becoming the decision driver for a proper supply performance, and supplier selection (SS) is used to mitigate the supply risk, the few existing SS approaches for optimization under uncertainty are typically prescriptive. This shortcome has been overcome through a risk-efficiency-based supplier selection (REBaSS) approach, which is an application of the total cost of ownership (TCO) approach and gives supplier-specific guidelines for immediate and later interventions, so that an average supply cost reduction may be expected, if compared with the traditional TCO. The purpose of the research is to assess the expected positive economic impact of REBaSS on the average total cost of supply in the EPC industry, where critical supplies are extremely frequent. REBaSS has been tested on 13 purchasing occasions within an EPC company, whose SS is currently based on TCO. The empirical test of REBaSS within its domain of application (i.e., procurement of critical supplies) shows a total positive benefit that amounts to 1 432 487€, i.e., 4.76% of the total TCOs of the selected sample. As a practical implication, not only does REBaSS allow to overcome the managerial and risk-related shortcomings of the traditional SS approaches (TCO included), it also – due to the fact that the average value of the critical supplies of an EPC company is about hundreds of million Euros – allows for the potential total economic benefit of the use of REBaSS, which can be estimated in the order of tens of million Euros. This confirms the validity – both managerial and economic – of REBaSS as a sound alternative to the traditional TCO, and encourages one to step into a different way of considering the supply risk within SS.

The increasing complexity of products and services, characteristically shorter product lifecycles, globalization of trade, and the improvements in logistics, have generally made company survival depend more and more on their suppliers (De Boer et al., 2001). This increasing dependence on suppliers leads companies to be highly exposed to contingencies, so that supply risk management (SRM) is recognized to be necessary (Zsidisin et al., 2000; Wu et al., 2006), and supplier selection (SS) becomes one of the most important issues for purchasing managers (Hsu et al., 2006). Such issues are even plainer in the engineering, procurement and construction (EPC) industry, and can be considered as an extreme case of the engineer-to-order (ETO) environment, i.e., an innovate-to-order (ITO) environment (Wadhwa and Rao, 2003). In fact, in this industry a high degree of complexity (also because of the intrinsically risky context of companies working by projects, see as an example Van der Vaart et al. (1996) and Chapman and Ward (2003)), together with an extremely high value associated with supplies (Cagno et al., 2004) have been observed. Thus, the importance of supply risk is plain in the EPC industry, and lack of proper management of this kind of risk can be detrimental to the success of a company. Further, based on Tang (2006, who classifies 4 main ways to mitigate the overall supply chain risk: demand, product, information, and supply management) and on the parallelism between supply management & supply risk management and project management & project risk management (Project Management Institute, 1987, Project Management Institute, 2000 and Project Management Institute, 2004), both SRM and supply management (SM – which includes SS as one of the most important issues; see Tang, 2006) can be used to mitigate the overall supply chain risk, as depicted in Fig. 1. Full-size image (22 K) Fig. 1. Five ways to mitigate the overall supply chain risk (adapted from Tang, 2006). Figure options Nevertheless, considering SS as the crucial issue of SM, these two (partially overlapping, at least in terms of information gathering, see Dekker and Van den Abbeele, 2008) different approaches (SS vs. SRM) are used alternatively by EPC companies under resource constraints (Micheli et al., 2008a). This latest study shows that supply risk, as a main risk to be managed through SCRM, is dealt with either focusing more on SS or on SRM. This negative correlation implies that a SS approach must explicitly consider supply risk and allow for its management, particularly when a SRM process is not extensively in place. In fact, in spite of the evolution of the SRM process, the management of supply risk is still strongly related with risks arising from improper supplier selection (Smeltzer and Siferd, 1998; Giunipero and Eltantawy, 2004). Therefore, a new SS approach (risk-efficiency-based supplier selection – REBaSS) as a way to mitigate the overall supply risk has been proposed (Micheli, 2008), which is as practical (Bhutta and Huq, 2002) as a total cost of ownership (TCO) approach (e.g., see Ellram, 1994; Degraeve and Roodhooft, 1999a and Degraeve and Roodhooft, 1999b) and, at the same time, a real support for SS as a decision-making issue, rather than an additional constraint for the decision maker (Matos, 2007). The paper is structured as follows. In Section 2, the issue of “supply risk” within both SS and SRM is discussed in an EPC context, and the transition from a TCO approach towards the need for a risk-efficiency-based supplier selection is presented; thereafter, the REBaSS approach is described, so that its managerial and practical implications are evidenced, as well as its expected positive economic impact on the total cost of supply. In Section 3 the purpose of the research is stated and in Section 4 the research methodology is reported. Section 5 of the paper includes the results and the discussion of the empirical research aimed at assessing the expected positive economic impact of the REBaSS approach on the average total cost of supply. Finally, a conclusion is drawn in Section 6.

Even for a peculiar and complex economic context such as the EPC supply chain, some ways to mitigate the overall supply chain risk have been highlighted by the literature. Among these ways, both SRM and SS pertain to supply chain risk management (SCRM), and they have been acknowledged to have a positive impact on the mitigation of the overall supply risk. However, SS, similarly to SRM, is considered a method for supply chain risk management, but as an alternative way under resource constraints (Micheli et al., 2008a). This negative correlation necessarily implies that an SS approach must consider the risk related to the supply, particularly when an SRM process is not extensively in place. As for the state of the art, supply risk has been seldom explicitly considered in SS, but this is no longer possible in such a turbulent business environment, where “risk” becomes the decision driver and measure of the attainment of a proper supply performance. Risk-efficiency-based supplier selection (REBaSS; Micheli, 2008) is a TCO application, which overcomes the weaknesses of the currently available approaches (traditional TCO included), most of all with respect to the need for a risk-comprehensive SS approach, which should be no longer be a meta-decision, and it allows a decision maker to make decisions taking risk in a conscious way, and to deal with a quantitative and economic evaluation of the potential suppliers as needed by the practitioners, as well. Following the steps of Matos (2007), the decisions are not univocal because they depend on the risk proneness of the decision maker. This feature of REBaSS is a powerful way to exploit the skills and the experience of the decision maker, who is the centre of the approach: the approach is a real support for the supplier selection as a decision-making issue, rather than an additional constraint for the decision maker. The decision maker is also given information about the risk/opportunity related to the expected variability of the effects of the interventions depending on the potential supplier. In fact, as far as the authors know, this is the only supplier selection approach that explicitly takes into account the variability of the output of the supplier evaluation in terms of varying attitudes of each supplier in order to render a planned mitigation intervention successful. This is something that a supplier selection approach must necessarily accomplish when a supply risk management process is not in place, in order to mitigate the overall supply risk. Furthermore, for the first time the concept of risk-efficiency (that originates in the research field of project risk management) has been shifted into the research field of procurement: by using REBaSS, the decision maker can make risk-efficient decisions when, through mitigation/exploitation interventions, a cost profile of a potential supplier is the best possible one both in EV and in probability distribution. In addition to the managerial effectiveness of REBaSS, the approach is easy to implement and does not show any negative economic implications. In fact, the possible organizational extra-cost in the case of Snamprogetti is nearly null, and this is likely to be so in all the EPC companies, where knowledge management systems are typically well established. As for positive implications, the REBaSS feature that guidelines for immediate and later interventions are given, once the potential supplier has been selected, provides an average reduction of the total supply cost, when compared with the traditional TCO. In fact, not only the selected supplier is the best one available in terms of total cost, reduced (with respect to TCO) through immediate mitigation interventions but, in addition, the list of later interventions can assist the procurement department in implementing supply risk management. The empirical test of REBaSS within its domain of application (procurement of critical supplies) shows a total positive benefit that amounts to 1 432 487€. This relevant benefit is 4.76% of the sum of the selected sample TCOs. This implies that the potential total benefit in the use of REBaSS can be estimated at approximately 2% of the turnover of an EPC company, which is tens of million Euros. In conclusion, by giving confirmation of the validity – both managerial and economic – of the REBaSS approach, the research has provided a sound alternative to the traditional TCO, and encourages one to step into a different way of considering the supply risk within SS.