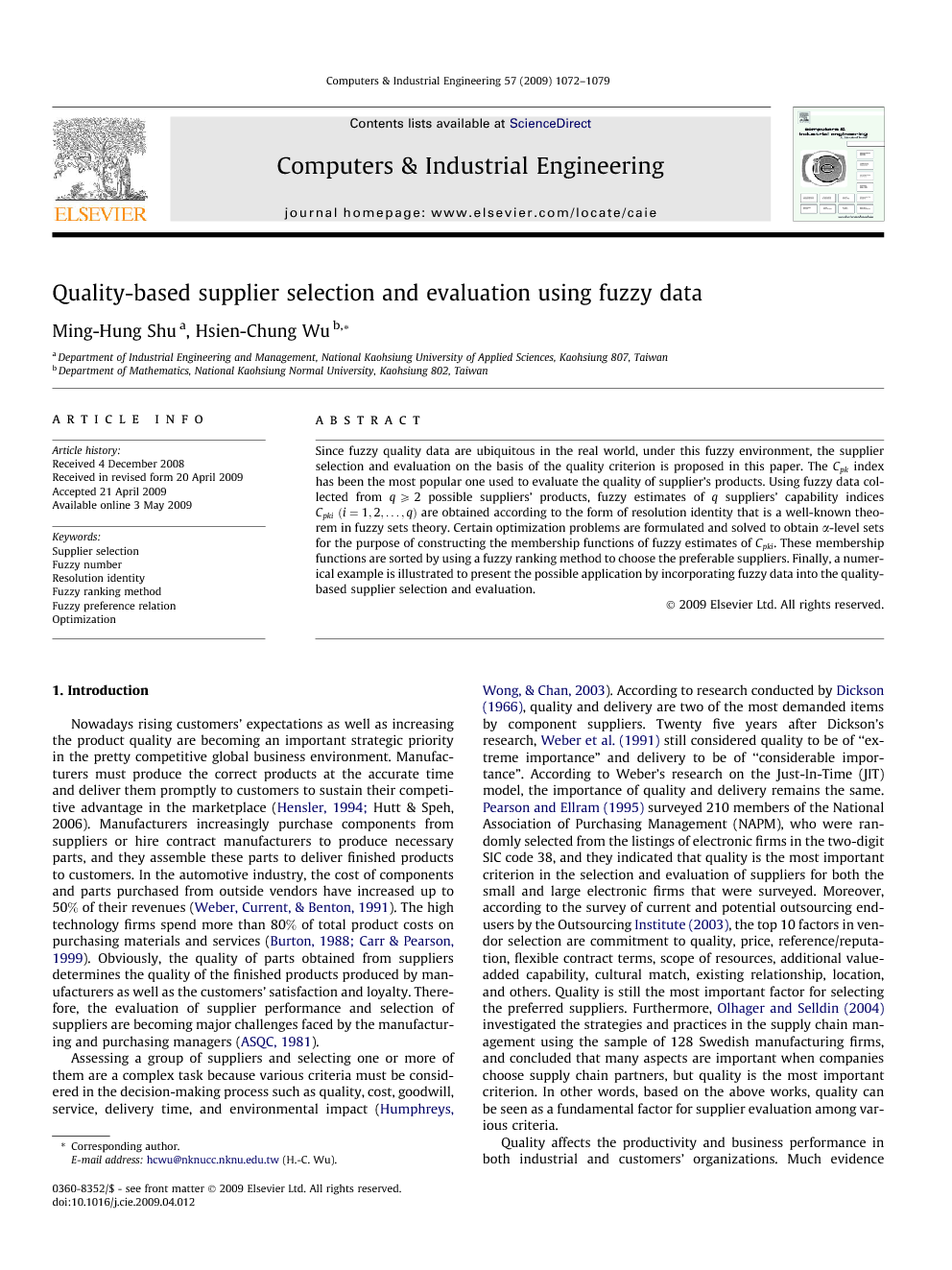 Since fuzzy quality data are ubiquitous in the real world, under this fuzzy environment, the supplier selection and evaluation on the basis of the quality criterion is proposed in this paper. The CpkCpk index has been the most popular one used to evaluate the quality of supplier’s products. Using fuzzy data collected from q⩾2q⩾2 possible suppliers’ products, fuzzy estimates of q suppliers’ capability indices View the MathML sourceCpki(i=1,2,…,q) are obtained according to the form of resolution identity that is a well-known theorem in fuzzy sets theory. Certain optimization problems are formulated and solved to obtain αα-level sets for the purpose of constructing the membership functions of fuzzy estimates of CpkiCpki. These membership functions are sorted by using a fuzzy ranking method to choose the preferable suppliers. Finally, a numerical example is illustrated to present the possible application by incorporating fuzzy data into the quality-based supplier selection and evaluation.

The fuzzy set theory is a useful method for modeling the problems with fuzzy (imprecise) information that has been recognized as one of uncertainties in the real world. The main contribution is that the methodology proposed in this paper is capable of selecting the preferable suppliers using fuzzy quality data, which was not seriously treated by the researchers. With the help of resolution identity theorem which is widely used in fuzzy sets theory, computational methods solving certain optimization problems are proposed to construct membership functions of fuzzy estimates of suppliers’ capability indices CpkiCpki with i=1,2,…,qi=1,2,…,q and q⩾2q⩾2. Moreover, using membership functions View the MathML source{cˆ˜pk1,…,cˆ˜pkq} of q suppliers, a fuzzy ranking method proposed by Yuan (1991) is extended to select the preferable suppliers. A step-by-step procedure is developed and a real example taken from the application of light emitting diodes (LEDs) is illustrated the applicability of our proposed methods. It is well-known that there are numerous process capability indices that are available for supplier selection. Although we choose the index CpkiCpki in this paper, we have to remark that the proposed methodology is still applicable to other indices by solving the similar optimization problems.