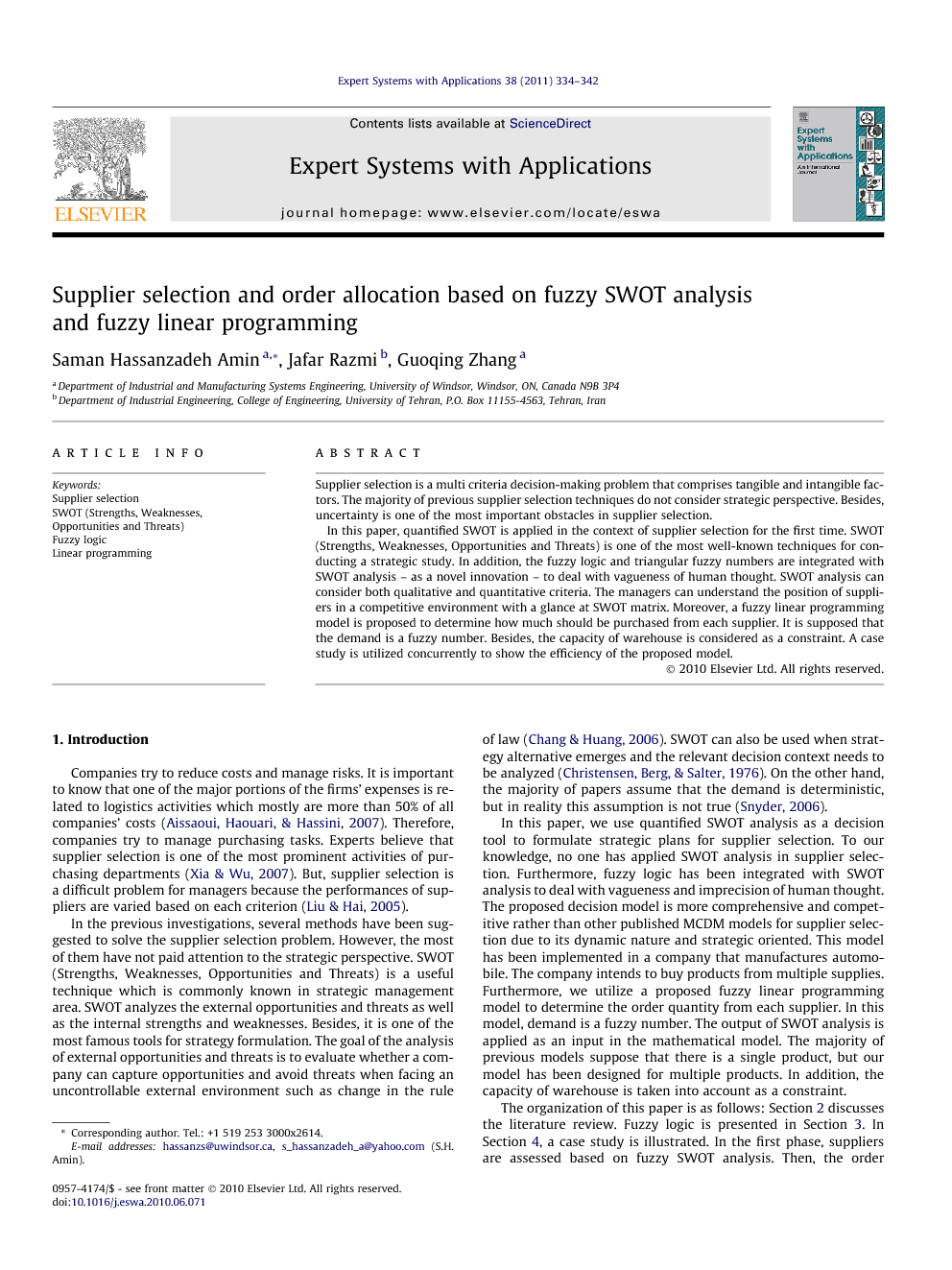 Supplier selection is a multi criteria decision-making problem that comprises tangible and intangible factors. The majority of previous supplier selection techniques do not consider strategic perspective. Besides, uncertainty is one of the most important obstacles in supplier selection. In this paper, quantified SWOT is applied in the context of supplier selection for the first time. SWOT (Strengths, Weaknesses, Opportunities and Threats) is one of the most well-known techniques for conducting a strategic study. In addition, the fuzzy logic and triangular fuzzy numbers are integrated with SWOT analysis – as a novel innovation – to deal with vagueness of human thought. SWOT analysis can consider both qualitative and quantitative criteria. The managers can understand the position of suppliers in a competitive environment with a glance at SWOT matrix. Moreover, a fuzzy linear programming model is proposed to determine how much should be purchased from each supplier. It is supposed that the demand is a fuzzy number. Besides, the capacity of warehouse is considered as a constraint. A case study is utilized concurrently to show the efficiency of the proposed model.

Companies try to reduce costs and manage risks. It is important to know that one of the major portions of the firms’ expenses is related to logistics activities which mostly are more than 50% of all companies’ costs (Aissaoui, Haouari, & Hassini, 2007). Therefore, companies try to manage purchasing tasks. Experts believe that supplier selection is one of the most prominent activities of purchasing departments (Xia & Wu, 2007). But, supplier selection is a difficult problem for managers because the performances of suppliers are varied based on each criterion (Liu & Hai, 2005). In the previous investigations, several methods have been suggested to solve the supplier selection problem. However, the most of them have not paid attention to the strategic perspective. SWOT (Strengths, Weaknesses, Opportunities and Threats) is a useful technique which is commonly known in strategic management area. SWOT analyzes the external opportunities and threats as well as the internal strengths and weaknesses. Besides, it is one of the most famous tools for strategy formulation. The goal of the analysis of external opportunities and threats is to evaluate whether a company can capture opportunities and avoid threats when facing an uncontrollable external environment such as change in the rule of law (Chang & Huang, 2006). SWOT can also be used when strategy alternative emerges and the relevant decision context needs to be analyzed (Christensen, Berg, & Salter, 1976). On the other hand, the majority of papers assume that the demand is deterministic, but in reality this assumption is not true (Snyder, 2006). In this paper, we use quantified SWOT analysis as a decision tool to formulate strategic plans for supplier selection. To our knowledge, no one has applied SWOT analysis in supplier selection. Furthermore, fuzzy logic has been integrated with SWOT analysis to deal with vagueness and imprecision of human thought. The proposed decision model is more comprehensive and competitive rather than other published MCDM models for supplier selection due to its dynamic nature and strategic oriented. This model has been implemented in a company that manufactures automobile. The company intends to buy products from multiple supplies. Furthermore, we utilize a proposed fuzzy linear programming model to determine the order quantity from each supplier. In this model, demand is a fuzzy number. The output of SWOT analysis is applied as an input in the mathematical model. The majority of previous models suppose that there is a single product, but our model has been designed for multiple products. In addition, the capacity of warehouse is taken into account as a constraint. The organization of this paper is as follows: Section 2 discusses the literature review. Fuzzy logic is presented in Section 3. In Section 4, a case study is illustrated. In the first phase, suppliers are assessed based on fuzzy SWOT analysis. Then, the order quantity is determined by a fuzzy linear programming model. Subsequently, discussion is presented in Section 5. Finally, conclusions are presented in Section 6.

Supplier selection is a multi criteria decision-making problem, which includes both qualitative and quantitative factors. In this paper, we proposed a decisional model for supplier selection which consists of two phases. In the first phase, quantified SWOT analysis (Strengths, Weaknesses, Opportunities and Threats) is applied for evaluating suppliers. The linguistic variables and triangular fuzzy numbers are used to quantify variables. In the second phase, a fuzzy linear programming model is applied to determine the order quantity. The major novel points and merits of the proposed model are in fivefold: first, the model analyzes the supplier selection problem from strategic view point. Second, fuzzy logic has been applied because it can take into account uncertainty in humans’ opinions. Besides, it is assumed that demand is a fuzzy number. Third, fuzzy logic and quantitative SWOT have been composed for the first time. Fourth, both of quantitative and qualitative factors have been considered. Fifth, the capacity of warehouse and minimum order quantity are taken into account as constraints in the mathematical model. This algorithm can be easily implemented with a spreadsheet package and its computation is fast. Therefore, the proposed model can be applied easily in practical situations. Not only the proposed fuzzy SWOT analysis can be applied for evaluating suppliers, but also it can be utilized for what De Boer et al. (2001) stated as a pre-qualification of suitable suppliers. The pre qualification is defined as the process of reducing the set of all suppliers to a smaller set of acceptable ones. After drawing a quantified SWOT matrix, the manager of company can choose a pool of suppliers from the first quadrant of SWOT matrix. In the case study, suppliers A3 and A4 would be selected. Expertise, experience, authority, and the responsibilities of decision makers are not equal in practice. Further research may be the determination of DMs, weights. Furthermore, in the mathematical model, the weights of internal and external criteria are determined by decision makers. It is useful to propose a scientific method for determining these weights. In addition, this paper has focused on manufacturing environment. It is worthwhile to implement fuzzy SWOT to select suppliers in service industries and compare the results. Moreover, we assumed that demand is a fuzzy number. Another future research may be the proposing mathematical model with stochastic and robust parameters.