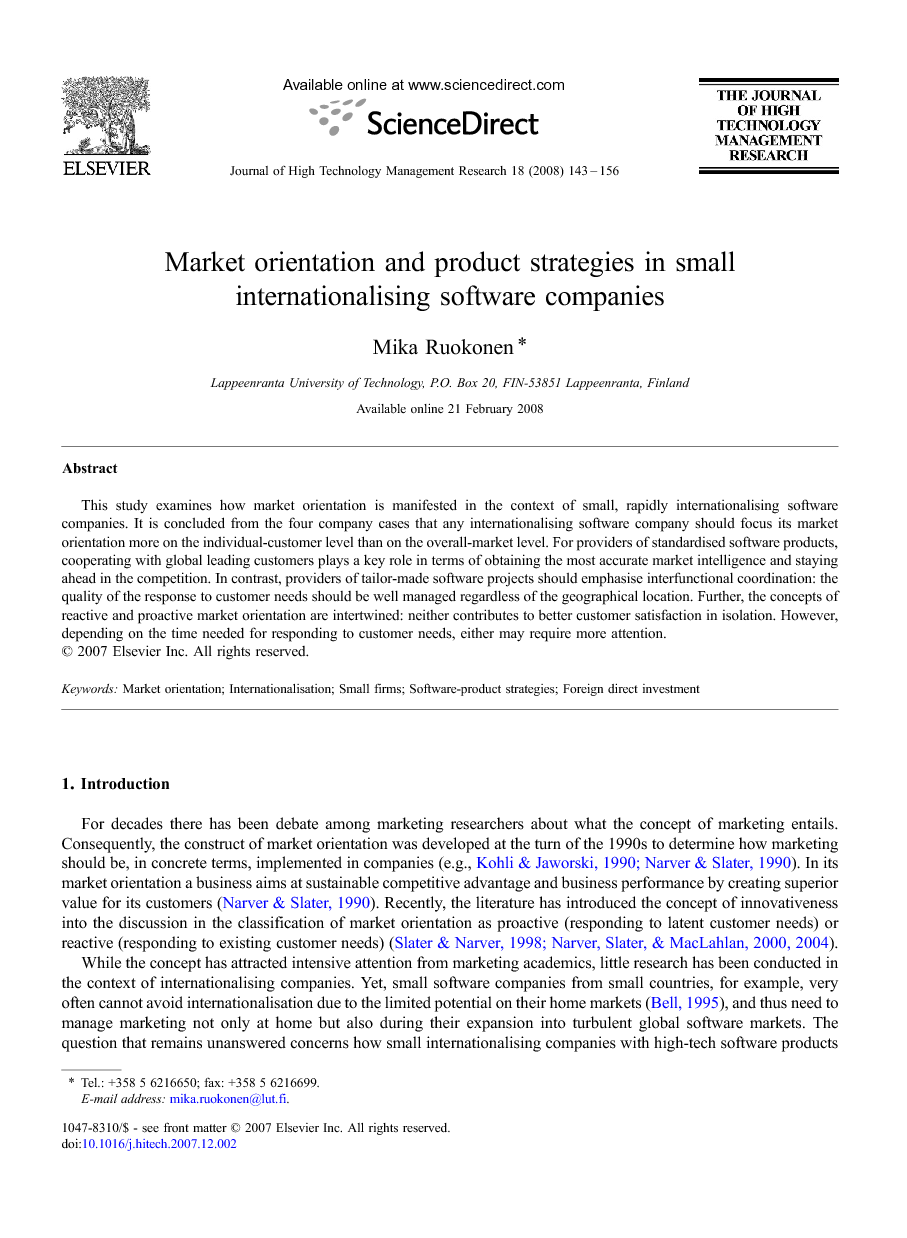 This study examines how market orientation is manifested in the context of small, rapidly internationalising software companies. It is concluded from the four company cases that any internationalising software company should focus its market orientation more on the individual-customer level than on the overall-market level. For providers of standardised software products, cooperating with global leading customers plays a key role in terms of obtaining the most accurate market intelligence and staying ahead in the competition. In contrast, providers of tailor-made software projects should emphasise interfunctional coordination: the quality of the response to customer needs should be well managed regardless of the geographical location. Further, the concepts of reactive and proactive market orientation are intertwined: neither contributes to better customer satisfaction in isolation. However, depending on the time needed for responding to customer needs, either may require more attention.

For decades there has been debate among marketing researchers about what the concept of marketing entails. Consequently, the construct of market orientation was developed at the turn of the 1990s to determine how marketing should be, in concrete terms, implemented in companies (e.g., Kohli and Jaworski, 1990 and Narver and Slater, 1990). In its market orientation a business aims at sustainable competitive advantage and business performance by creating superior value for its customers (Narver & Slater, 1990). Recently, the literature has introduced the concept of innovativeness into the discussion in the classification of market orientation as proactive (responding to latent customer needs) or reactive (responding to existing customer needs) (Slater and Narver, 1998, Narver et al., 2000 and Narver et al., 2004). While the concept has attracted intensive attention from marketing academics, little research has been conducted in the context of internationalising companies. Yet, small software companies from small countries, for example, very often cannot avoid internationalisation due to the limited potential on their home markets (Bell, 1995), and thus need to manage marketing not only at home but also during their expansion into turbulent global software markets. The question that remains unanswered concerns how small internationalising companies with high-tech software products should adopt a market orientation and understand latent and existing customer needs. Further, while existing studies on market orientation have confirmed its relationship with business performance in both producing (e.g., Narver & Slater, 1990) and service companies (Caruana et al., 1999, Javalgi et al., 2005 and Kara et al., 2005), little research has been conducted in the software industry. There seems to be much more work to be done if we are to understand, if (and how) software companies with a standardised product offering and — on the other hand — with tailor-made services differ in terms of its adoption. Overall, software products are a representative example of high-technology that is difficult and costly to develop, and in those conditions companies should put strong emphasis on analysing customer needs in order to target their heavy product-development investments properly. In conclusion, software industry-sensitive marketing and management concepts seem to be needed (Alajoutsijärvi, Mannermaa, & Tikkanen, 2000), given that the industry is estimated to grow steadily in the future (Tekes, 2003) and that we are witnessing the rise of a global digital economy. This study was designed in order to address the identified research gap in the area of market orientation in internationalising software companies. The specific empirical target is the small company that has rapidly expanded its operations into multiple countries by using foreign direct investment (FDI) as an entry mode. The results of earlier research suggest that FDIs are quite seldom used as a foreign-market entry mode by small software firms (Garvey & Brennan, 2006) since their limited resources are often not enough to make any large-scale investments feasible. Nevertheless, it was chosen to focus on them in this paper for two reasons, which make the context particularly interesting. First, rapid internationalisation stretches the resources of a small company and limits its possibilities to explore the needs of its international customers simultaneously in multiple countries ( Julien & Ramangalahy, 2003), and thus complicates the company's ability to be market-oriented. Secondly, as a high-cost and high-risk operational mode ( Erramilli & Souza, 1993), FDIs involve country-specific investments of the type that make it very difficult to change the selected market strategy afterwards. Thus, one could conclude that the companies in question should be very careful in identifying and responding to international customer needs if they aim to survive. To conclude, the aim of the study is to describe how market orientation is manifested in the context of small, rapidly internationalising software companies. A further objective is to investigate: • How the managers of these companies perceive proactive and reactive market orientation in their activities • How different software-product strategies affect their market orientation. In the sections that follow, the first gives a review of the theories of market orientation and software-product strategies, and describes the empirical context of rapidly internationalising small software firms. The research method is discussed in the third section, and the company cases are introduced in the fourth in order to demonstrate market orientation in the internationalisation context. Finally, the study closes with some conclusions and offers both theoretical and managerial implications.

This paper addressed the question of how market orientation is manifested in the context of small rapidly internationalising software companies. The retrospective in-depth case studies presented have deepened our understanding of this relatively unexplored research area, and have extended the theory of market orientation and product strategies into the domain of software. On the evidence of our empirical data it is argued that the market-orientation concept requires a different emphasis with regard to different product strategies, especially in the software-business context.