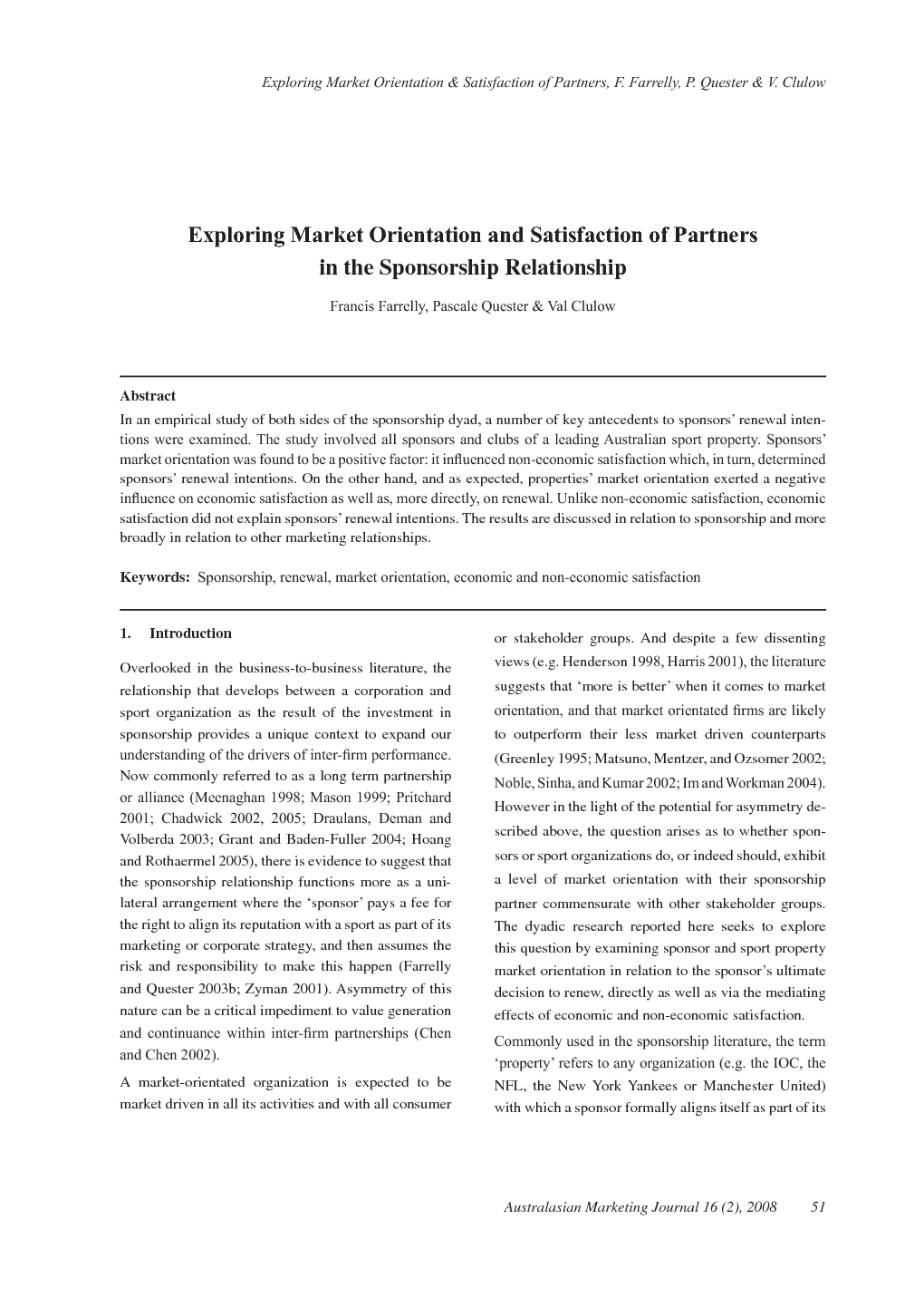 Overlooked in the business-to-business literature, the relationship that develops between a corporation and sport organization as the result o f the investment in sponsorship provides a unique context to expand our understanding of the drivers of inter-firm performance. Now commonly referred to as a long term partnership or alliance (Meenaghan 1998; Mason 1999; Pritchard 2001; Chadwick 2002, 2005; Draulans, Deman and Volberda 2003; Grant and Baden-Fuller 2004; Hoang and Rothaermel 2005), there is evidence to suggest that the sponsorship relationship functions more as a uni - lateral arrangement where the ‘sponsor’ pays a fee for the right to align its reputation with a sport as part of its marketing or corporate strategy, and then assumes the risk and responsibility to make this happen (Farrelly and Quester 2003b; Zyman 2001). A symmetry of this nature can be a critical impediment to value generation and continuance within inter-firm partnerships (Chen and Chen 2002). A market-orientated organization is expected to be market driven in all its activities and with all consumer or stakeholder groups. And despite a few dissenting views (e.g. Henderson 19 98, Harris 2001), the literature suggests that ‘more is better’ when it comes to market orientation, and that market orientated firms are likely to outperform their less market driven counterparts (Greenley 1995; Matsuno, Mentzer, and Ozsomer 2002; Noble, Sinha, and Kumar 2002; Im and Workman 2004). However in the light of the potential for asymmetry de - scribed above, the question arises as to whether spon - sors or sport organizations do, or indeed should, exhibit a level of market orientation with their sponsorship partner commensurate wit h other stakeholder groups. The dyadic research reported here seeks to explore this question by examining sponsor and sport property market orientation in relation to the sponsor’s ultimate decision to renew, directly as well as via the mediating effects of economic and non-economic satisfaction. Commonly used in the sponsorship literature, the term ‘property’ refers to any organization (e.g. the IOC, the NFL, the New York Yankees or Manchester United) with which a sponsor formally aligns itself as part of its arketing or corporate strategy. Surprisingly, research to date has largely ignored the relationship between sponsor and property. This is despite the fact that spon - sorship now accounts for over 50% of total revenue generated by some major international sports organi - zations (Burton 2003; Chadwick 2005), thus making it fundamental to their viability. This also ignores the increasing tendency for sponsors to use related invest - ments as a platform for entire brand (and sometimes corporate) positioning (Cornwell and Maignan 1998). Sponsorship is now often a key part of international and global marketing strategy. Ni ke has used sponsorship as the centerpiece of its international marketing strategy to forge a link with soccer, the most popular sport in the world. Described as a “strategic necessity”, its 13 year plus $US500 million dollar sponsorship of Manchester United (Farrelly, Quester and Greyser 2006) was put in place to attain brand authentic ity in the UK and Europe where soccer is the number one sport (O’Malley 2002), and where this type of high exposure relationship was vital to challenging Adidas, a company with over 50 years’ involvement in the region. In this study, we seek to determine key drivers of the sponsorship relationship including Market Orientation and Satisfaction, and to elucidate how these may explain the success of sponsorship, as measured by sponsors’ decision to renew the contract. Our contention is that an understanding of the antecedents of sponsors’ renewal intentions should include the degree of market orienta - tion displayed by the sponsor and property, as well as the level of economic and non-economic satisfaction experienced by the sponsor. To examine this question, we develop a predictive model of sponsorship renewal and provide preliminary empirical evidence of its validity.

From a total of fifty-four protected sponsor relation-ships in the AFL, forty-six matched sets were captured (or ninety-two completed questionnaires), representing a total response rate of 86%. This response rate is very high relative to comparable studies and stems from the support shown for the study by AFL senior management. The model shown in Figure 1 was examined and tested using AMOS.4. A correlation matrix of the variables in the model was constituted, as shown in Table 1, suggesting that several highly significant cor - relations existed between the variables included in the conceptual model despite the small sample size, we were able to imple - ment structural equation modeling, using AMOS, as most statistical indicators supported its use with the data set. Hence, the analysis proceeded to examine the causal relationships between market orientation, eco - nomic and non-economic satisfaction, and the decision to renew. The model shown in Figure 1 was tested and provided good indicators of fit (Chi squared =8.274, p= .147). The GFI (.92), and AGFI (.94) are close to 1 signifying an excellent fit with the data. This was further confirmed by a RMSEA of .037. Good model comparisons between the null model and hypothesised model were found, with TLI (.98), NFI (.97), and CFI (.99) all very close to 1. All items loaded on their hypothesized factors, and the estimates were positive and significant and above the criteria limit set down by Bagozzi and Yi (1988), hence providing evidence of convergent validity. Discriminant validity was also indicated since the confidence interval (±2 S.E.) around the correlation estimates between any two latent indicators never included 1.0 (Anderson and Gerbing 1988). According to the model, five of our eight hypotheses were supported by the data which overall is an encouraging outcome. The results of the hypotheses testing are summarized in Table II.