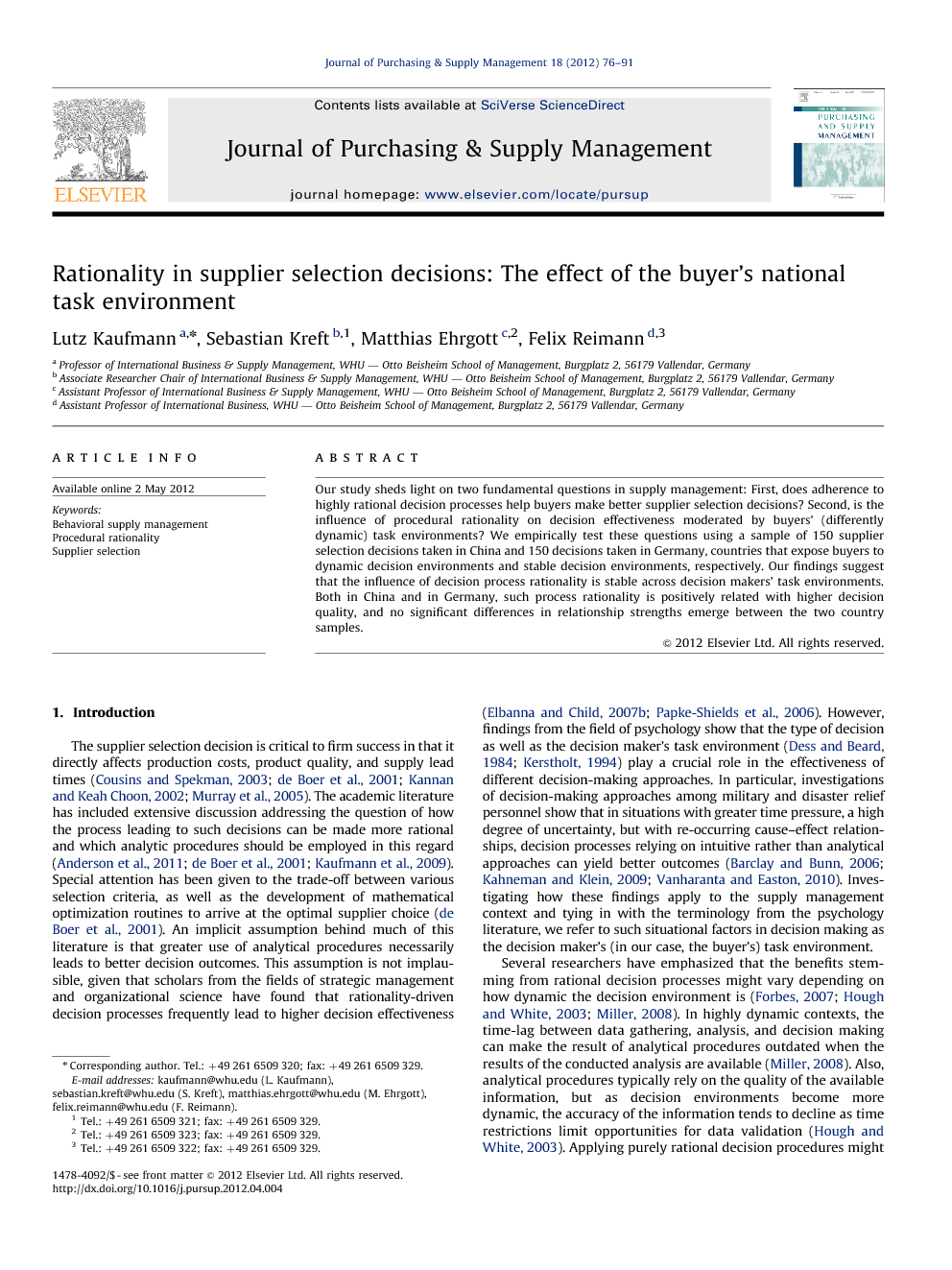 Our study sheds light on two fundamental questions in supply management: First, does adherence to highly rational decision processes help buyers make better supplier selection decisions? Second, is the influence of procedural rationality on decision effectiveness moderated by buyers’ (differently dynamic) task environments? We empirically test these questions using a sample of 150 supplier selection decisions taken in China and 150 decisions taken in Germany, countries that expose buyers to dynamic decision environments and stable decision environments, respectively. Our findings suggest that the influence of decision process rationality is stable across decision makers’ task environments. Both in China and in Germany, such process rationality is positively related with higher decision quality, and no significant differences in relationship strengths emerge between the two country samples.

The supplier selection decision is critical to firm success in that it directly affects production costs, product quality, and supply lead times (Cousins and Spekman, 2003, de Boer et al., 2001, Kannan and Keah Choon, 2002 and Murray et al., 2005). The academic literature has included extensive discussion addressing the question of how the process leading to such decisions can be made more rational and which analytic procedures should be employed in this regard (Anderson et al., 2011, de Boer et al., 2001 and Kaufmann et al., 2009). Special attention has been given to the trade-off between various selection criteria, as well as the development of mathematical optimization routines to arrive at the optimal supplier choice (de Boer et al., 2001). An implicit assumption behind much of this literature is that greater use of analytical procedures necessarily leads to better decision outcomes. This assumption is not implausible, given that scholars from the fields of strategic management and organizational science have found that rationality-driven decision processes frequently lead to higher decision effectiveness (Elbanna and Child, 2007b and Papke-Shields et al., 2006). However, findings from the field of psychology show that the type of decision as well as the decision maker's task environment (Dess and Beard, 1984 and Kerstholt, 1994) play a crucial role in the effectiveness of different decision-making approaches. In particular, investigations of decision-making approaches among military and disaster relief personnel show that in situations with greater time pressure, a high degree of uncertainty, but with re-occurring cause–effect relationships, decision processes relying on intuitive rather than analytical approaches can yield better outcomes (Barclay and Bunn, 2006, Kahneman and Klein, 2009 and Vanharanta and Easton, 2010). Investigating how these findings apply to the supply management context and tying in with the terminology from the psychology literature, we refer to such situational factors in decision making as the decision maker's (in our case, the buyer's) task environment. Several researchers have emphasized that the benefits stemming from rational decision processes might vary depending on how dynamic the decision environment is (Forbes, 2007, Hough and White, 2003 and Miller, 2008). In highly dynamic contexts, the time-lag between data gathering, analysis, and decision making can make the result of analytical procedures outdated when the results of the conducted analysis are available (Miller, 2008). Also, analytical procedures typically rely on the quality of the available information, but as decision environments become more dynamic, the accuracy of the information tends to decline as time restrictions limit opportunities for data validation (Hough and White, 2003). Applying purely rational decision procedures might in such cases lead to an illusion of rationality, so that decisions ultimately are misguided rather than supported by analytical procedures. Studying the role of these perspectives in the supply management discipline, we address two questions: (1) Does adherence to highly rational decision processes help buyers make better supplier selection decisions, and (2) is the influence of procedural rationality on decision effectiveness moderated by buyers’ (differently dynamic) task environments? The second question is particularly relevant, given that purchasing strategies are becoming increasingly global (Gelderman and Semeijn, 2006, Quintens et al., 2006a and Quintens et al., 2006b) and that multinational enterprises (MNEs) frequently establish local purchasing teams in different regional supply markets (Loppacher et al., 2006, Monczka et al., 2006 and Trent, 2004). Our study therefore acknowledges the “pressing need for theory and research to examine what is etic and emic about behavior in organizations” (Gelfand and Christakopoulou, 1999, p. 249). We test our model with a sample of 150 supplier selection decisions made in the dynamic task environment of an emerging economy (China) and compare them with a sample of 150 supplier selection decisions made in the more stable task environment of the mature German economy. The remainder of our paper is organized as follows. In Section 2, we provide an overview of the literature on supplier selection decision making. In Section 3, we outline the theoretical framework and hypotheses. In Section 4, we describe the applied methodology, including our approach to ensure data equivalence as a necessary prerequisite for rigorous cross-country research (Hult et al., 2008). In the final sections (5, 6, 7 and 8), we analyze and discuss our findings, suggest avenues for future research, and derive managerial implications.