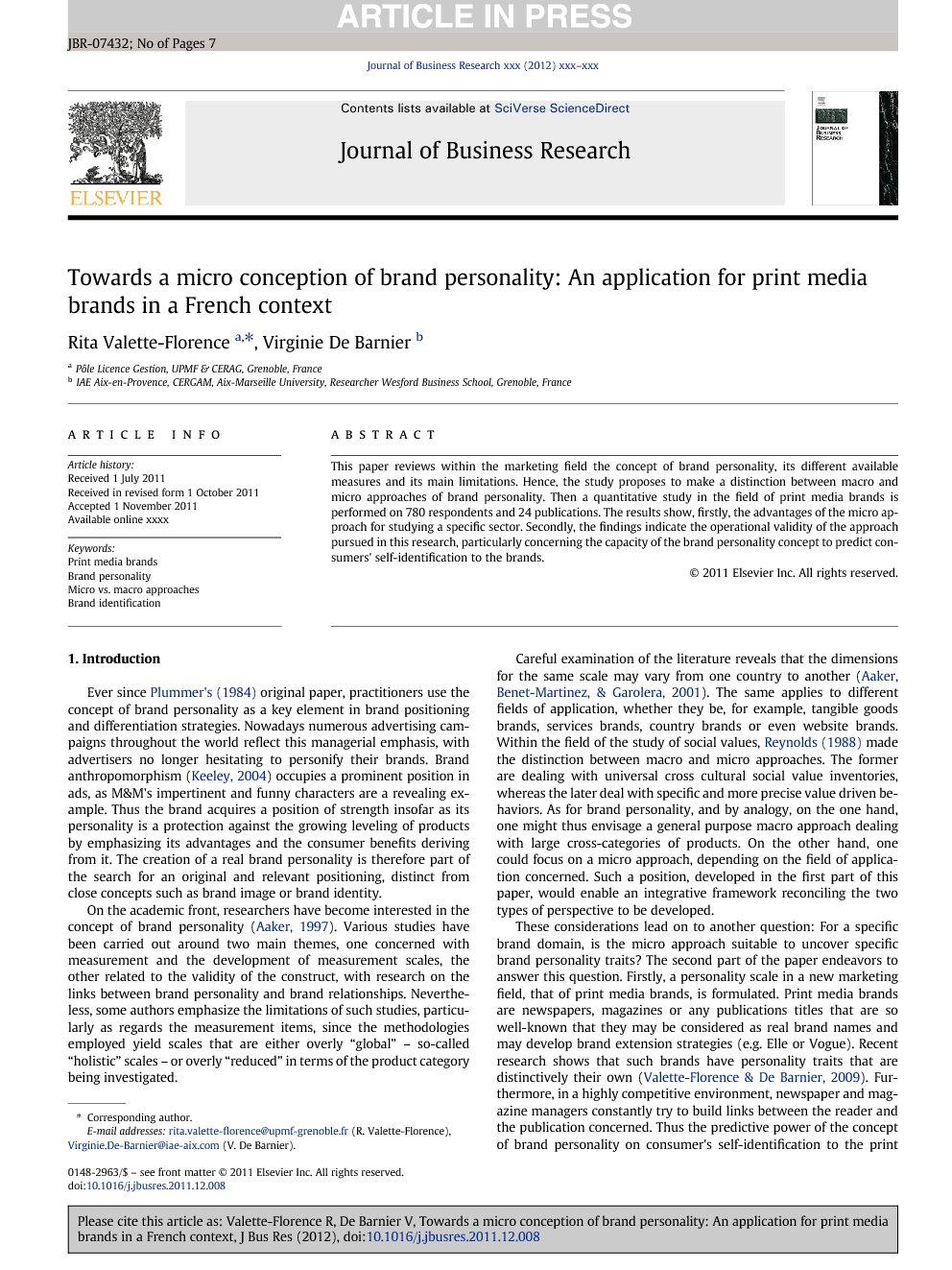 This paper reviews within the marketing field the concept of brand personality, its different available measures and its main limitations. Hence, the study proposes to make a distinction between macro and micro approaches of brand personality. Then a quantitative study in the field of print media brands is performed on 780 respondents and 24 publications. The results show, firstly, the advantages of the micro approach for studying a specific sector. Secondly, the findings indicate the operational validity of the approach pursued in this research, particularly concerning the capacity of the brand personality concept to predict consumers' self-identification to the brands.

Ever since Plummer's (1984) original paper, practitioners use the concept of brand personality as a key element in brand positioning and differentiation strategies. Nowadays numerous advertising campaigns throughout the world reflect this managerial emphasis, with advertisers no longer hesitating to personify their brands. Brand anthropomorphism (Keeley, 2004) occupies a prominent position in ads, as M&M's impertinent and funny characters are a revealing example. Thus the brand acquires a position of strength insofar as its personality is a protection against the growing leveling of products by emphasizing its advantages and the consumer benefits deriving from it. The creation of a real brand personality is therefore part of the search for an original and relevant positioning, distinct from close concepts such as brand image or brand identity. On the academic front, researchers have become interested in the concept of brand personality (Aaker, 1997). Various studies have been carried out around two main themes, one concerned with measurement and the development of measurement scales, the other related to the validity of the construct, with research on the links between brand personality and brand relationships. Nevertheless, some authors emphasize the limitations of such studies, particularly as regards the measurement items, since the methodologies employed yield scales that are either overly “global” – so-called “holistic” scales – or overly “reduced” in terms of the product category being investigated. Careful examination of the literature reveals that the dimensions for the same scale may vary from one country to another (Aaker, Benet-Martinez, & Garolera, 2001). The same applies to different fields of application, whether they be, for example, tangible goods brands, services brands, country brands or even website brands. Within the field of the study of social values, Reynolds (1988) made the distinction between macro and micro approaches. The former are dealing with universal cross cultural social value inventories, whereas the later deal with specific and more precise value driven behaviors. As for brand personality, and by analogy, on the one hand, one might thus envisage a general purpose macro approach dealing with large cross-categories of products. On the other hand, one could focus on a micro approach, depending on the field of application concerned. Such a position, developed in the first part of this paper, would enable an integrative framework reconciling the two types of perspective to be developed. These considerations lead on to another question: For a specific brand domain, is the micro approach suitable to uncover specific brand personality traits? The second part of the paper endeavors to answer this question. Firstly, a personality scale in a new marketing field, that of print media brands, is formulated. Print media brands are newspapers, magazines or any publications titles that are so well-known that they may be considered as real brand names and may develop brand extension strategies (e.g. Elle or Vogue). Recent research shows that such brands have personality traits that are distinctively their own (Valette-Florence & De Barnier, 2009). Furthermore, in a highly competitive environment, newspaper and magazine managers constantly try to build links between the reader and the publication concerned. Thus the predictive power of the concept of brand personality on consumer's self-identification to the print media brand is examined. Finally, a comparison is made between this new micro measurement scale and other macro scales so as to identify the specific characteristics of each.

This paper, based on an analysis of previous academic studies on the concept of brand personality, allows to put forward an integrative framework by contrasting macro approaches with their general scope and micro approaches focusing on a specific area of application. The paper's area of investigation, newspaper and magazine brands provides a concrete illustration of the micro perspective. Thus at a theoretical level, the findings clearly confirm the possibility of characterizing print media publications by specific personality traits and dimensions that until now did not exist in other brand personality inventories. They also reveal the advantage of focusing on a micro approach if one wishes to identify more than just brand personality traits in a specific product category. This study of brand personality and its measurement offers a new definition of brand personality: Brand personality is an evaluation based on human personality traits applicable and relevant to the brand and cultural context in which they occur. The micro approach, which fits perfectly into this definition, should thus lead to greater operational scope for the concept of brand personality, and more particularly as regards the three effects of brand personality on consumer behavior already identified and highlighted by researchers: reduced research and information processing (De Chernatony, 1999), better differentiation in relation to the competition (Plummer, 1984), emotional satisfaction and a tendency to loyalty (a desire to continue buying the same brand or its new extensions, including paying a higher price) (Freling & Forbes, 2005). At a managerial level, the creation and validation of a print media brand personality scale through the micro approach offers two major advantages: the more exact semantics of items, facets and dimensions, directly related to the area investigated, give print media publication managers more focused action levers; the predictive power of brand personality on explained variables, such as identification with the brand, improved by a more detailed analysis of the scale, should allow more effective strategies to be formulated for increasing readers' loyalty to newspapers and magazines. Like all research, the present study has its limitations, which mainly concern the sample and the questionnaire administered through the Internet which probably induces a bias toward an over-representation of the higher socio-economic categories. Obviously, the results also are limited by the number of the print media brands encompassed. In addition, a new data collection procedure should be undertaken as a means to confirm the scale structure and asses its predictive power with regards to other dependent variables such as for instance trust, attachment and loyalty. Ultimately, the benefits of this specific scale should also be compared with those stemming from broader macro brand personality scales. A number of avenues for future research seem promising. First, it would be interesting to extend this analysis to other media such as television and radio and to see whether or not there are personality traits specific to these areas. On the other hand, starting from existing scales, such as the present print media brand scale or Ambroise's (2006) scale, creating a hybrid personality scale jointly applicable to different areas would be relevant. Such research could subsequently help produce a better match for advertisers between brand personality profiles and the newspapers and magazines in which they place their advertising. In addition, further surveys have to be set up in order to formally compare the predictive power of macro vs. micro approaches to brand personality. Ultimately, at a more theoretical level, further studies should try to uncover other concepts accounting for identification with the brand or the readership, since for specific magazines (e.g. Elle and Le Monde) the predictive power of brand personality on brand identification remains rather weak.