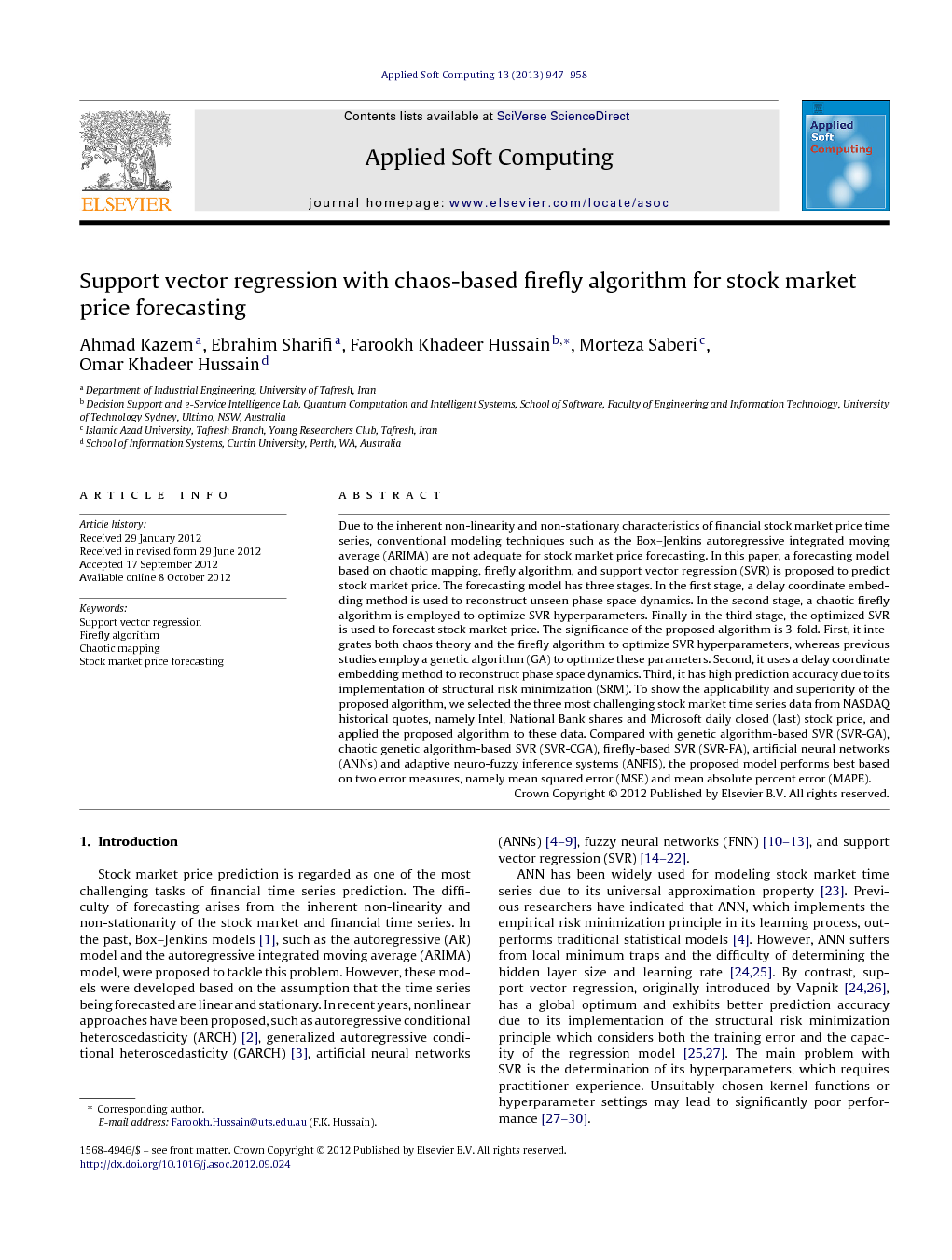 Stock market price prediction is regarded as one of the most challenging tasks of financial time series prediction. The difficulty of forecasting arises from the inherent non-linearity and non-stationarity of the stock market and financial time series. In the past, Box–Jenkins models [1], such as the autoregressive (AR) model and the autoregressive integrated moving average (ARIMA) model, were proposed to tackle this problem. However, these models were developed based on the assumption that the time series being forecasted are linear and stationary. In recent years, nonlinear approaches have been proposed, such as autoregressive conditional heteroscedasticity (ARCH) [2], generalized autoregressive conditional heteroscedasticity (GARCH) [3], artificial neural networks (ANNs) [4], [5], [6], [7], [8] and [9], fuzzy neural networks (FNN) [10], [11], [12] and [13], and support vector regression (SVR) [14], [15], [16], [17], [18], [19], [20], [21] and [22]. ANN has been widely used for modeling stock market time series due to its universal approximation property [23]. Previous researchers have indicated that ANN, which implements the empirical risk minimization principle in its learning process, outperforms traditional statistical models [4]. However, ANN suffers from local minimum traps and the difficulty of determining the hidden layer size and learning rate [24] and [25]. By contrast, support vector regression, originally introduced by Vapnik [24] and [26], has a global optimum and exhibits better prediction accuracy due to its implementation of the structural risk minimization principle which considers both the training error and the capacity of the regression model [25] and [27]. The main problem with SVR is the determination of its hyperparameters, which requires practitioner experience. Unsuitably chosen kernel functions or hyperparameter settings may lead to significantly poor performance [27], [28], [29] and [30]. Recently, optimization algorithms such as genetic algorithm (GA) and chaotic genetic algorithm (CGA) have been used to find the best hyperparameters for SVR [31], [32], [33] and [34]. In this paper, we propose a chaotic firefly algorithm for optimizing the SVR hyperparameters. Results show that our method performs better than SVR-FA, SVR-GA SVR-CGA, ANFIS, ANN and other previous algorithms. The remainder of this paper is organized as follows. Section 2 introduces new prediction model, including delay coordinate embedding, logistic map, support vector regression and firefly algorithm. Section 3 defines the implementation steps of the proposed model. Section 4 describes the data used in this study and discusses the experimental findings. Conclusions and remarks are given in Section 5.

This study developed a novel hybrid model based on a chaotic firefly algorithm and support vector regression for stock market price forecasting. The contribution of the proposed algorithm is mainly the integration of chaotic motion with a firefly algorithm as a simple and novel optimization method. Second, this new integrated chaotic lgorithm is incorporated to find the best hyperparameters of SVR namely, cost, RBF kernel function width parameter and radius of the epsilon tube. Third, the mplementation of phase space reconstruction in the data preprocess procedure makes the behavior of the financial time series more recognizable for learning machines such as ANN and SVR. The proposed model has three stages. In the first stage, unobserved time series features are extracted by using phase space reconstruction according to Takens’ theorem. In the second stage, a chaotic firefly algorithm is applied to optimize SVR hyperparameters based on MAPE. Finally in the third stage, the optimized SVR is used to forecast stock market prices. Chaos, one of the most important natural motions in the world, can be used as a powerful driver of nature-inspired search algorithms such as GA and FA. A chaotic mapping operator (CMO) improves the search ability of the firefly algorithm in the solution space by increasing the quality of the initially generated population and prevents it from becoming trapped in local optima. In addition, the use of structural risk minimization (SRM) in the SVR training process makes it more robust than ANN- or ANFISbased models which use empirical risk minimization (ERM). In summary, the SVR-CFA model is more suitable than the other three methods for describing the data relationship between input and output. This highly effective forecasting framework can be applied to other problems involving financial forecasting.